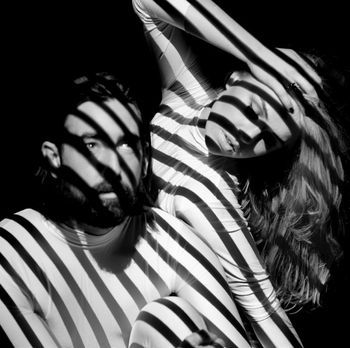 Beginners, they are not.»

Since forming in Sheffield in 2006, Slow Club have released two EPs and two albums, each showcasing different and distinct facets of their musical DNA. While most bands seem happy to rest on their laurels, afraid to push their sound forward, multi-instrumentalists Rebecca Taylor and Charles Watson, for it is they, get a bit bored of recreating the same things over and over. So while their debut album, 2009's 'Yeah So', was a beautifully ramshackle collection of country and folk-tinged strumalongs, 2011's more experimental 'Paradise' pushed and pulled the band into myriad new musical directions. But nothing can quite prepare you for the quantum leap that takes place on their beautifully epic forthcoming third album, 'Complete Surrender'. Recorded with producer Colin Elliot, who's previously helped create an equally widescreen sound on albums by Richard Hawley, 'Complete Surrender' touches on everything from Motown and the output of Memphis' Stax Records to the immaculately produced pop of the 1970s, via Frankie Valli and David Bowie. Mostly written in a pool-house hideaway in Stroud, away from temptation and distraction, 'Complete Surrender' - despite being released nearly three years after 'Paradise' - actually came quite quickly, with songs started in January 2013 and the bulk of the album finished by May. 'Complete Surrender' is the sound of a band completely in control of their muse; showcasing not only a desire to experiment but to harness that spirit into songs that still make total sense. Skipping along from the celebratory, upbeat, pure pop rush of the title track (and first single) via the lovelorn urgency of 'Not Mine To Love', to the slowburn majesty of the horn-lead 'The Queen's Nose' - which showcases Rebecca's emotional, lung-bursting vocals - it's an album that you'll want to live inside for years to come.
description from www.roughtrade.com