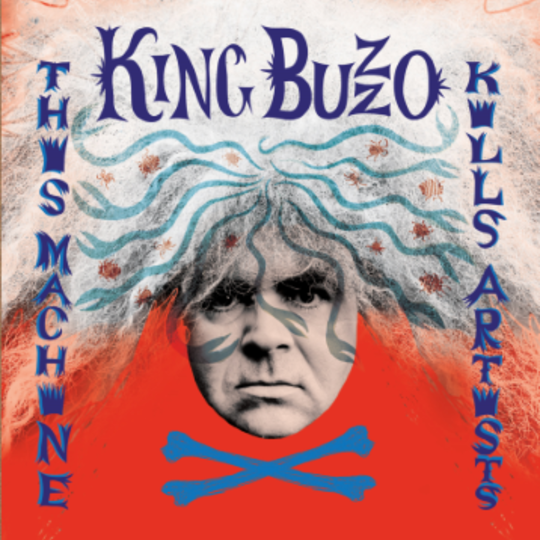 There’s a club night in London called the Alternative Comedy Memorial Society (or ACMS) which encourages weird, odd and surreal comedians to take risks and chances with material - it has a welcoming audience who only heckle with a set of pre-approved phrases, the best of which is “I appreciate what you’re trying to do here.” Well, dear King Buzzo (aka The Melvins' Buzz Osborne)... we appreciate what you’re trying to do here, but...

Two decades on from his most famous acolyte’s Unplugged album, Melvin’s frontman Osborne has decided to go lo-fi, but not, he stresses, in a wishy-washy Nick Drake-meets-Neil Young-meets-Woody Guthrie way (though the title of This Machine Kills Artists references Guthrie’s famous 'This Machine Kills Fascists' guitar adornment.) The only instruments present here may be an acoustic guitar and Osborne’s reedy voice, but that’s not stopped him writing a sludge-metal album full of big riffs and downtuned strings, it’s just that those guitars are unaccompanied by anything more substantial than a double track, and treated with effects no more extreme than a bit of reverb. It’s a fairly unique approach when you think about it, moving Osborne distinctly away from from fellow alt-rock acoustic warriors like Jay Mascis, Kurt Cobain or Alice in Chains, who could never resist the warm pull of folk, or the urge to pretty-up their downplayed songs with cellos and harps. The MTV Unplugged series has a lot to answer for: everyone thinks they’re Bob Dylan.

Not so Osborne: this is as heavy and uncompromising as anything he’s ever done. If anything it’s less pretty, less melodic, and even uglier than your average Melvins album. It certainly lacks the deft daftness that usually oozes beneath the riffing. For a few songs - for any handful of these songs you care to pick at random - it works very well. Osborne lays down a succession of satisfyingly meaty grooves offset by his usual right-angle vocal choices. ‘Rough Democracy’ could be expanded by a full band into a proper grunge classic, all quiet/loud dynamics and shouty bits, while ‘Instrument of God’ and ‘How I Became Offensive’ are amongst the best things he has put his name to, the latter’s rare burst into brassy major chords is one of the most effective moments on the record, probably because of its contrast with the more spare approach displayed elsewhere. Chris Cornell would kill for a chorus as good as ‘Dark Brown Teeth’.

The problem is with the accumulative effect. There’s just nowhere near the variety here to sustain even a short collection- This Machine Kills Artists has 17 tracks and once you hit the halfway point you’ve already heard every trick. Subtle sonic touches, a distorted vocal here, a little textured noise in the background there, barely make an impact and the sheer sameyness of it begins to grate. It doesn’t help that Osborne isn’t blessed with the most dynamic of singing voices, on Melvins records this doesn’t really matter because musically they know how to hold your interest, but when it’s just him and a scrapey acoustic guitar for a double-albums worth of songs? Dear reader, it pains us to say this, but it starts to get,not just boring but dreary. For someone as skilled and experienced as Buzz Osborne that’s unforgivable. What we’re left with is an 8/10 EP stretched way past the point of interest, five or six songs in you start knocking half a mark off with every fresh coat of same-old. A worthy idea, but one you’ll rarely reach for twice.