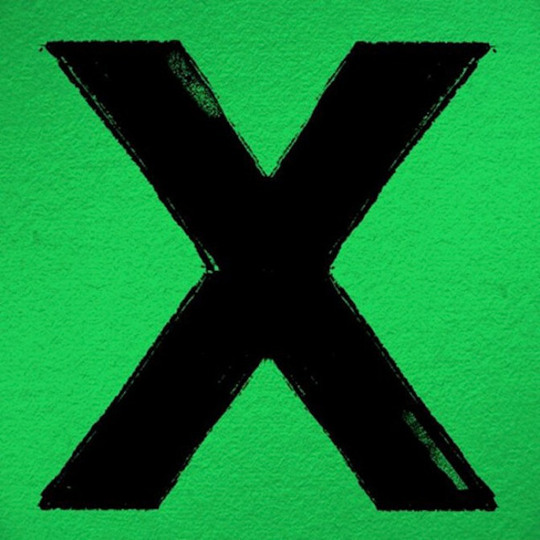 "Tell me when it kicks in", pleads Ed Sheeran, his 'Bloodstream' coursing along softly, a familiar safe acoustic guitar the bed upon which his vocals lay mostly still, the occasional toss and turn too demure to upset the surface.

Sheeran's debut, +, was almost all surface, yet it quickly established a major success story. What it failed to establish was a major personality. It's a pretty unrewarding listen, given its paper-thin nature and awkward mix of despair and bravado. Three years on, it feels like the overly-wistful ramblings of a cocky teenager. To be entirely fair, it was penned by a 17-year-old, so perhaps it was unreasonable to expect hype, maturity and magic to marry. With Sheeran now heading towards his mid-twenties, it's reasonable to demand that elusive spark emerge. x offers a few lively embers, but never quite ignites.

'One' is cut from the exact same cloth as 'The A Team', though it's a better song. Placed first, it's set up to provide a smart coda as Sheeran, so weighed down previously by heartbreak, attempts to finally draw a line in the sand. Instead, he embraces a submissive role, clinging on when he needs to let go. It's a curious choice, especially when you consider that this is him letting go, as the majority of x's often clumsy narratives will attest. The sentiment remains much the same, spelled out in big neon letters, as befits this champion of the wounded adolescent. "I'm stumbling off drunk, getting myself lost," he mourns. "I am so gone, so tell me the way home. I listen to sad songs, singing about love, and where it goes wrong".

Everyman emotion. Straightforward lyrics. Relatable pain. 'We've all been there.' That's the Sheeran blueprint. It's unlikely to go away, regardless of the girl in question. He doesn't write for critics. A tight relationship with his fans means he's so bulletproof that there's no real need to. Nonetheless, he has spoken of a desire to win them over. As the bouncy-but-toothless 'I'm A Mess' confirms, he's not about to reinvent his chosen wheel, rather modify it here and there with carefully-selected glamour. Enter Pharrell. Thanks to his presence, 'Sing' is precisely what it needs to be; a super-produced and super-powered radio daze. The verve is undeniable and Sheeran's mix of Timberlake-lite falsetto and blunt rapping comes off. Just. Still, such obvious pandering can't help but ring cynical. 'Sing' is about ticking boxes (the usual Sheeran staples are present - boozing, brooding, blazing), not self-expression.

Could it be that Sheeran's lack of a noteworthy identity is his identity? It certainly helps, allowing him to flit to different styles - as he did on + - without fear of alienating the disciples. He could release a skiffle record and the YouTube numbers would continue soaring into the millions. It's strange, because you're left with the feeling that he should be a great deal more interesting than he actually is. The high points of x owe as much to others as they do to its chief architect.

'Don't', a scathing shot at a cheating A-List ex who is Definitely Not Taylor Swift, suggests that Blackstreet and Lucy Pearl feature amongst Sheeran's Top 25 Most Played. You may argue that the song is tonally all over the place but Sheeran sounds much more alive with a few drops of venom in his mouth than he does while churning out string-heavy soul-searching. As a polished, up-tempo pop stomp, 'Don't' delivers. How could something that nods so explicitly in the direction of one of the best tracks of the Nineties fail? But therein lies the problem. For all the cutesy cover-the-cussin' rap spin, for all the pleasing piano lines and rhythmic invention, the author cannot claim full ownership. Again the personality hides away, swarmed by voices bigger and brighter.

x's first third is not without its issues but there is charm, not to mention the feeling that Sheeran really is trying to raise his game. A pity, then, that the remaining 35 minutes is alternatively as generic and simpering as it gets. Once 'Don't' snaps shut, that's about it for anything revelatory or engaging. 'Nina' could make up the numbers on any unremarkable boy band's unremarkable album. That the cloying 'Photograph' - which narrowly avoids crashing into Bruno Mars' 'Just The Way You Are' - is co-written and produced by a member of Snow Patrol should surprise nobody, given that it follows their heartstring-tugging script so resolutely. At least it moves. 'Tenerife Sea' is pure slush, 'Runaway' never gets going, while the aggressively-saccharine 'Thinking Out Loud' is the musical equivalent of drowning in quicksand. 'Afire Love', awash with heavenly hokum, never should have escaped the studio.

It doesn't have to be this way. x has ideas and flashes of promise. As does its creator. Tell me when he kicks in.