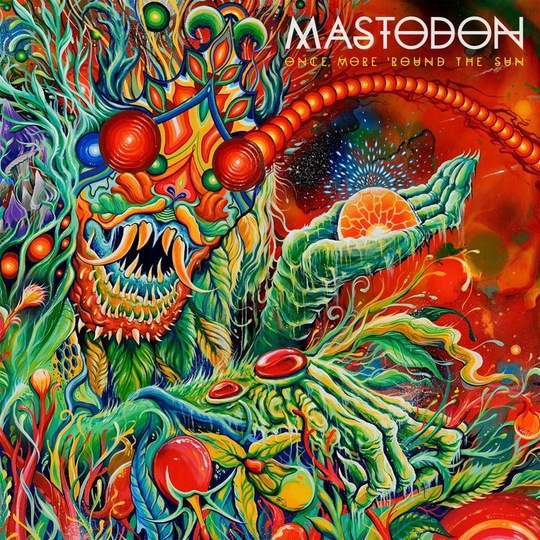 Mastodon were once the widely acknowledged titans of heavier music but their stock has slipped of late, especially amongst their earlier fans, and the question increasingly asked is ‘do Mastodon still have it?’ Well the good news is that if you define ‘it’ as ‘the ability to construct a killer riff’ (and really, why wouldn’t you?) then the answer is a definitive ‘hell yes’. But, the bad news, is having ‘it’ enough? Not quite, no.

On Once More ‘Round the Sun, Mastodon find themselves bitten in the bum by the law of diminishing returns: this latest LP is the spiritual successor and follow up to 2011’s The Hunter, their least interesting release, and it is by and large more of the same. Mike Haliechuk, guitarist from Fucked Up, recently questioned how long heavier bands can continue before they run their course and the fire in their bellies goes out, with reference to his band’s latest, Glass Boys. His comments are equally applicable to Mastodon: they certainly haven’t run out the energy needed to hurtle through furious thundering riffs but there is a real sense of repeating themselves here. As the title itself perhaps hints at, there is very little on Once More ‘Round the Sun that Mastodon fans won’t have heard before.

Arguing about genres and subgenres within the heavier end of rock and metal is a sure-fire guarantee of tedium. Where does metal-core end and math-core begin? No-one cares. But genre is well worth mentioning with regards to Once More ‘Round the Sun because it is here that Mastodon leave metal behind altogether and plant their flag firmly into hard rock. Perhaps in part this is due to the influence of Nick Raskulinecz, the producer probably best known for his work with the radio-friendly stadium rock of Foo Fighters. The genre shift is noticeable in the less-abrasive and more melodic vocals as well as in the soloing. Songs like ‘Asleep in the Deep’ end with sun-drenched and technically proficient but perhaps over-fussy solos that seem more ‘classic rock’ or even ‘stadium rock’ than anything that ever originated from metal.

Mastodon have mentioned in interview that they don’t really have a singer; that their vocals are shared amongst bandmates who do their best as enthusiastic amateurs. Back when they were releasing early LPs like Remission and Leviathan and working more in the metal side of things the lack of a ‘proper’ vocalist didn’t really hurt them: the primary focus was on the riffs. Now, however, as the production on Once More ‘Round the Sun leads them more towards classic rock territory, the lack of a primary singer with a distinctive voice becomes more problematic: songs like ‘High Road’ which have real instrumental energy and momentum are undermined by the anodyne and bloodless “You take the high road/I’ll take the ground below you” vocals.

This leads on to another major criticism of Once More ‘Round the Sun: the lyrics. Mastodon have spoken about their desire to break away from being pigeon-holed as a band that writes concept albums and that Once More ‘Round the Sun is very much just a bunch of songs. But it’s hard not to feel nostalgic for a time when Mastodon songs were about ‘Moby Dick’, or astral projection or, well, something interesting or out of the ordinary. The lyrics from ‘Asleep in the Deep’ are fairly representative: “I hope that we make it to shore / It seems that we weathered the storm”. They’re not terrible, but they are also not particularly noteworthy.

There are however certainly many positive elements to Once More ‘Round the Sun. Releasing the LP in the height of summer was a masterstroke: this is certainly the sunniest Mastodon record to date and would make a great soundtrack to driving fast away from the drudgery of work with all the windows wound down. Mastodon have honed what they do, and each part of each song fits together perfectly. The opening couple of minutes of the first song ‘Tread Lightly’, a huge bouncy riff with sing-a-long worthy vocals piling in on top of it, are enough to convince that ever member of the band is pulling together and playing with a huge smile on their faces.

Arguably though, the most interesting moment of the whole album doesn’t belong to Mastodon at all. Scott Kelly from Neurosis provides vocals (as he regularly does for Mastodon) on the final track, which he gives a post-metal gravitas, but it’s the contribution of the ragged female vocals from the punk band The Coathangers on ‘Aunt Lisa’ that proves to be the real highlight. Their yelps of “Hey! Ho! Let’s get up and rock and roll!” provide a spontaneity and energy that the rest of the album, for all its intricate solos and thunderous riffs, fails to live up to. Once More ‘Round the Sun has lots to recommend it, but it’s a very safe LP that simply doesn’t provide fans with much they won’t have heard before.