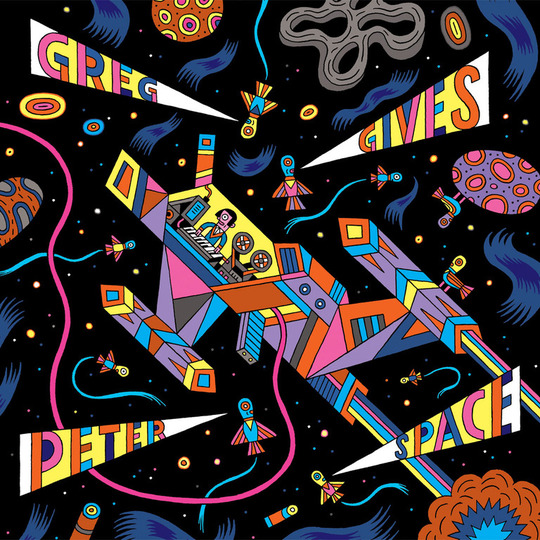 ‘Dub’ is a sub-genre whose meaning has steadily morphed over its 40-year-history, now often signifying little more than an abundance of space, reverb and echo effects. It’s often so far flung from its Jamaican origins that you’d be forgiven for failing to join the dots tracing back the likes of Demdike Stare to King Tubby, or Sun Araw to The Scientist. It’s to that effect that Greg Gives Peter Space is, in fact, a totally brilliant project. There are many moments of outright dub pastiche - such as the beginnings of EP opener ‘The Drive’ - but the most revelatory passages seamlessly integrate dub’s messy modus operandi with Peter Broderick and Greg Haines’ uniformly excellent, squeaky clean modern compositions and whiter than white indie songwriting. The duo’s debut EP under the name doesn’t take dub’s legacy lightly, going beyond mere imitation and embodying the space-bound, inorganic spirit that set dub apart from its Earthly reggae roots.

For the uninitiated, Peter Broderick is an American multi-instrumentalist and singer/songwriter who graduated from indie folk session darling (he played with M. Ward back in the day) to Europe-based member of Efterklang and all-round contemporary classical composer/leftfield songwriter extraordinaire. His relationship with Erased Tapes has produced some killer solo albums, including 2012’s These Walls of Mine, and has seen him involved in some incredible collaborations, contributing violin, voice and Juno to Lubomyr Melnyk’s phenomenal Corollaries and a producer credit on Nils Frahm’s The Bells. Greg Haines on the other hand, is a Berlin-based British composer. He’s very much part of the same set (Frahm even mastered his last solo album), but his recent output has become increasingly enamoured with synthesizers and rhythms, coming fully to the forefront on ‘Something Happened’ from last year’s Where We Were. Haines’ penchant for studio-as-instrument make him the ideal foil to help ‘dubbify’ Broderick’s tunes.

‘The Drive’ is the most complete combination of Broderick’s songwriting with the dub that inspired the project, clamouring out of muddy studio detritus onto a hand percussion and bass-heavy groove straight out of the ‘Scratch’ Perry handbook, while Broderick’s very non-dub acoustic guitar and lyrical drawl lay down a languid tune on top. The song takes an about-turn halfway through, abandoning the bass and percussion for a brief crescendo of swelling strings and multitracked Wilson brothers falsettos before collapsing back into bass and soaking wet spring reverb.

‘The Feeling Shaker’ sits on a similarly bouncy Tubby groove, incorporating walls of jiggling synthesizers, organs and piano, bouncing around the stereo field with organic fluidity. Broderick’s made it clear that “In the true spirit of dub music, many of the mixes were made live, both of us hovering over the mixing board...processing the sounds with live effects while the music bounced down to tape”, and that playful spirit remains intact. ‘Electric Eel River’ is a classically intimate, typically disjointed song by Broderick, plonked out on banjo with breathy vocal delivery - yet the dub spirit of the project somehow prevails without jarring as rumbles of bass flitter into the mix, and eventually ghostly semblances of percussion and piano.

Many of the greatest Seventies recordings from Lee “Scratch” Perry’s Black Ark were also the messiest (see Blackboard Jungle Dub, hounded by flawed mixdowns as tracks spilled all over each other, resultantly imbuing every channel with ghostly whispers from elsewhere) and the effect is put to great use here. ‘A Clear View’ and, as is dub tradition, its remixed instrumental companion piece, ‘A Clear Dub’ return things to typically upbeat bouncy dub territory, this time making use of a drum machine and constantly peaking, fuzzed out synth bass. ‘A Clear Dub’ shoots deeper into outer space than even the legendary Scientist could ever manage thanks to the abundance of synths (that were oddly rarely used as such in classic reggae circles).

The seven minute ‘February Space Duet’ closes the EP with the sort of epic heart-wrenching spirit that the pair usually deal in. Having eschewed most of that melancholy neo-classical spirit for the previous five tracks, the power of the rhythmless, pseudo-ambient space of the track, Haines’ empyrean synth chords and Broderick’s listless violin laments is amplified massively. Still under a Jamaican spell, the mix is similarly inhabited by the spirits of bleeding channels, with sounds coagulating on the tape, and becoming a beautifully amorphous and staggering whole, much more akin to parts of Klaus Schulze’s cello & synth masterpiece of emotional sci-fi atmospheres, Dune, than to anything featuring The Upsetters. For a six-song EP, the project offers more than enough to fill the space of an album, and - despite the overt focus on dub - it presents the very best of both Haines’ and Broderick’s significant strengths. When Greg gives Peter Space, some very, very good things happen.