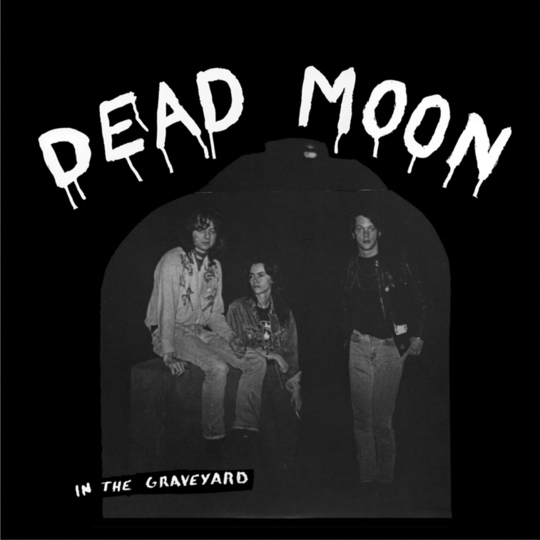 Folks often like to laud the most remarkably enduring of rock music’s veterans by dubbing them ‘immortal’, and if you generate enough money that people are willing to pay for your blood to be changed in a private Swiss clinic, that illusion is more likely to be prolonged. At some point, though, cold reality is going to kick in. In the case of Fred Cole, singer and guitarist of Oregon’s Dead Moon, his fifty years of writing and releasing music – all the more astonishing for never having a bloated paycheck as motivation – were put on ice in March this year, when he needed emergency open heart surgery. A diagnosis of 80-100% arterial blockage sounds a bit hairy, to say the least, but true to form, Fred recovered faster than expected; the business of being a brilliant, singular and enormously admirable totem of underground rock can continue from its paused position.

Formed in the late Eighties by Fred and his wife Toody, who married in 1967 and have played in bands together since the early Seventies, Dead Moon are no longer a going concern, although the couple’s current band Pierced Arrows is along similarly anthemic, stripped-to-a-skeleton lines. They maintained a fierce release rate in their time, however, starting in 1988, ’89 and ‘90 with the three albums tackled here, on account of their CD reissue on Portland punk label M’lady’s (they’re also available on esteemed archive imprint Mississippi, should you prefer vinyl). Fred and Toody, plus Dead Moon drummer Andrew Loomis, would never have claimed to have invented a new rock’n’roll language – time-honoured imagery, which some might call clichés, are embraced here with passion – but at no point on these albums does it feel like a superfluous Xerox of the past.

A Dead Moon song, typically between two and three minutes long, might call back to blues, country, rockabilly, the mid-Sixties garage explosion that kickstarted Fred’s career in 1964, and the autonomous DIY punk scene (which the band managed to be a glowing example of, while largely existing outside of it). Greg Sage, of Portland’s occasionally brilliant Wipers, heartily endorsed Dead Moon early on, and the band’s debut LP In The Graveyard has a Wipers-y feel at times. Less instrumentally deft and lower of fidelity, sure, but ‘Graveyard’ and ‘Don’t Burn The Fires’ combine a yearning sweetness and a punky forward momentum with a determination to present electric guitars, bass and drums in as un-manipulated a fashion as possible.

Additionally, there’s a couple of moments of mooning balladry: ‘Where Did I Go Wrong’, in which Toody and Fred harmonise on the chorus, and a cover of Elvis’ ‘Can’t Help Falling In Love’, which Toody sings on her own. (The wide-eyed jangle which results has overtones, likely accidental, of another band of iconic Pacific Northwesteners of the time, Beat Happening.) Two more covers of blues standards, Mose Allison’s ‘Parchment Farm’ and the muddy-of-origin ‘Hey Joe’, belie Fred’s assertion on In The Graveyard’s closer, ‘I Hate The Blues’. He’s talking about the state of mind, of course: “I’ve tried to put ‘em in a bottle / Some people put ‘em in their arm.”

While Dead Moon’s efficacious methods resulted in there being very little to choose between these three albums, if you must limit yourself to one, make it Unknown Passage, their sophomore non-slump. This is mainly because it begins with ‘Dead Moon Night’, the group’s de facto anthem and guaranteed entry in the rock canon of every universe but this one. Unusually drawn out at almost five minutes and making vast amounts of hay from its one primary riff, its evocation of outsiderdom is entirely the equal of ‘Roadrunner’, ‘Ace Of Spades’ or Black Flag’s ‘Nervous Breakdown’.

Plenty of great shakes on the other nine tracks, mind you. Featuring only one cover this time (an energetic run through the Chambers Brothers’ ‘Time Has Come Today’), production values are raised slightly, albeit still unencumbered by studio trickery. ‘My Escape’ and ‘I’m Wise’ fall into a gap between Paisley Underground and proto-grunge; The Wipers are recalled again with Unknown Passage’s second best number, the ulcerous snarl of ‘54/40’. The melodic jaunt of ‘Demona’ is borderline powerpop, while ‘On My Own’ locates the precise point where garage rock began to turn into proto-metal.

‘Milk Cow Blues’, another out-of-copyright staple of the eponymous genre, kicks off Defiance, Dead Moon album number three. It proves to be a red herring of sorts: Fred’s outlook starts to become grumpier here, his imagery darker and more gothic. “Born from the seeds of anger and hatred / Do it to them like they do / It’s only revenge and the worst of it all / It all comes back to you” he yowls on ‘Revenge’, countrified garage at the end of its tether. ‘Walking On My Grave’ has a DM hall of fame riff, a rejection of party political grandstanding and the claim – ad-libbed, I think – that “the New Kids On The Block are taking my place!” Toody’s sole lead vocal performance, on ‘Johnny’s Got A Gun’, has a kind of rebel song cadence to it, and warns the ill-defined powers that be of a popular uprising. (The sentiment of this song has distinct echoes in the rhetoric of America’s anti-gun control/survivalist militia loon faction; I’d like to think it’s not to be taken literally, although I’m unsure if the question’s ever been put to Dead Moon, or Cat Power, who covered it.)

It was, however, during ‘Kicked Out – Kicked In’, Defiance’s penultimate song, when I figured out who Dead Moon most closely resemble: the previously-invoked Mötorhead. Their production values are rather different, likewise their career record sales and, you’d assume, treatment of their own bodies (both Fred and Lemmy have had heart scares in the last 12 months, but Lemmy didn’t, to my knowledge, run a marathon aged 60). Both bands, though, are quintessential power trios who shun effects pedals, unofficially endorse Jack Daniels and are utterly dedicated to capturing the transcendental outlaw spirit of rock’n’roll, then heavily amplifying it. “When I was 16 I was kicked out of school / They couldn’t dig my antisocial attitude / When I was 20 looking for a job / They told me, ‘kid, you got hair too long’...” is the kind of glorious nonsense that sounds like, well, nonsense unless you immerse yourself in its spirit. Fred Cole, like Lemmy, has been doing just this for five decades, and while his ability to continue on this path remains in the balance, readers are urged to busy themselves with a few of the choicest cuts of an extraordinary band.

The Air Between Words