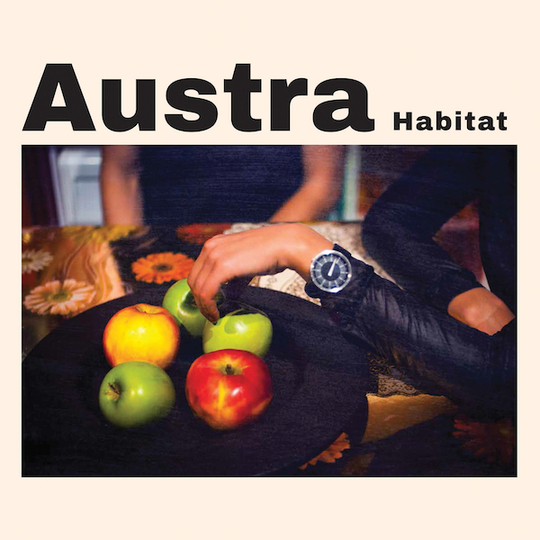 Many Austra fans will be familiar with the Habitat EP’s title track, which has been knocking around in live form for several years. Despite the song being a staple of Austra’s shows it has never previously been released as the band didn’t feel it fit with either of their albums.

Whilst Austra have always specialised in ominous electro beats, of which ‘Habitat’ has plenty, it’s easy to see why it stands apart from Feel It Break or the powerful theatricality of last year’s Olympia. It’s not simply electronic, but one of the band’s most overt dance tracks, with clear elements of trance and house. There is a mysteriousness to it upon first listen, yet it soon becomes an infectious earworm that pursues the listener, demanding many a repeat play. Singer Katie Stelmanis’ piercing voice is fused with sombre operatic longing as she refrains, “I want you, oooh, I need you, brother”. Cue shivers through the vertebrate and an uncontrollable desire to dance.

Elsewhere the EP is more experimental, even more dance floor focussed, and largely without vocals. The titles’ of ‘Bass Drum Dance’ and ‘Doepfer’ (named after the German electronic instrument manufacturers) make no secret of where the band are coming from, with a gaggle of synthesizers and dark unrelenting drumbeats, crescendoing and falling again. ‘Doepfer’ in particular builds to incorporate a sense of urgency and aggression.

Final song ‘Hulluu’ sounds like a party track to begin with but soon swerves from that course, turning eerie and hypnotic with sinister whispered vocals amongst beats and taps and wild, unfettered music that feels like the electro equivalent of Animal from The Muppets having a bash - a good thing, in my book at least. The actual not-very-scary lyrics (“I took your microphone/It’s in the river”) are in contrast with the terrifying delivery, showing a sense of playfulness common to all the instrumental tracks on Habitat.

The title song is clearly the stand out, however even accepting this, the Habitat EP shows the heart of a band who are effortlessly versatile and willing to mutate, experiment and push in whichever direction they goddamn please. It is this willingness which makes them consistently exciting, going from strength to strength with every release.