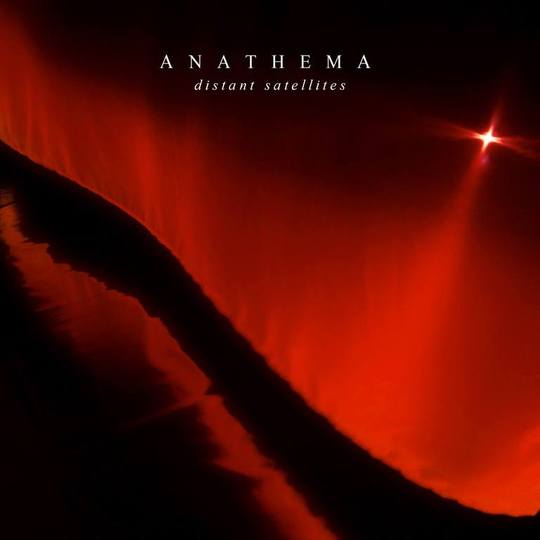 It seems like a long time ago now that Anathema abandoned their roots in the UK death/doom scene to embark on a more melodic path, one that has led to them becoming one of the country’s foremost purveyors of emotionally charged rock. Straddling the boundary between Floydian progressive rock, post-Radiohead art rock and (whisper it) post-Coldplay pop rock, Anathema’s two most recent efforts, 2010’s We’re Here Because We’re Here and 2012’s Weather Systems, have seen the group affirm just how comfortable they have become in their own skin. The bright skies that graced the covers of both those records were startlingly appropriate indicators of how far hope had come to inflect the mournful tones that had previously dominated Anathema’s discography.

Distant Satellites is a natural successor to Weather Systems. It’s a clarification, in many ways, that Anathema have fully embraced their current trajectory; this is how Anathema sound now, and anyone wishing for a return to the sombre tones of Judgement will be disappointed. There are strings everywhere, washing over sheened guitars and acutely memorable piano motifs. At appropriate intervals electronics bubble into view, although not with the dystopian intent of Weather Systems’s ‘The Storm Before the Calm’ or A Natural Disaster’s ‘Closer’. Hints at the gothic grandeur of their past lurk in every corner, but the end compositional product that Distant Satellites provides is too polished for strands of gloom to ever swallow the whole.

This may all sound like a rather cynical, even critical, evaluation of Anathema circa 2014, but it’s not intended to be. The brothers Cavanagh (vocalist/guitarist Vincent, guitarist Danny and bassist Jamie), siblings Douglas (vocalist Lee and drummer John) and relative newcomer Daniel Cardoso (keys) have managed to make Anathema sound more convincing than ever. Lyrics that, written on paper, seem trite and earnest are transformed into stirring evocations of deeply buried feelings by the conviction of vocal delivery from both Vincent Cavanagh and Lee Douglas. The latter’s voice, which was affecting but rather vulnerable sounding when first appearing on record over a decade ago, has grown immeasurably in strength in recent years. She is now capable of matching her co-vocalist’s rousing exhortations rather than merely echoing them. It’s the emotional power of the band’s singers that makes the opening quintet of tracks so easy to praise. Even ‘Ariel’, which risks diving headfirst into mawkishness in its opening moments, is soon righted into a passionate anthem by the pair’s call-and-response vocals.

The hiccups start with the sixth track, ‘Anathema’. Writing a self-titled track piece after nearly 25 years of existence is quite a statement and one that, sadly, Anathema don’t quite pull off. Vincent Cavanagh’s delivery of lines like “It gave us a purpose, sometimes / It gave us a reason and a rhyme / Looking for meaning in song / Searching and searching, so long” for once falls slightly flat. Whilst one appreciates what Anathema are trying to say, I’m not sure there are any vocalists in the world who could carry those lyrics off whilst dramatic orchestration looms ominously in the background without the whole thing sounding ludicrously overblown. Thankfully some clever arrangements and an epic Danny Cavanagh guitar solo just about rescue the song from being a complete flop, but it’s a shame that ‘Anathema’ doesn’t quite live up to the band’s strong songwriting credentials. ‘You’re Not Alone’, meanwhile, comes across as somewhat redundant. Its skittish electronics and jerky guitar feel out of place on an album packed with epics.

Thankfully, the album’s final act is as convincing as its opening movements. The title track is brilliantly put together. The IDM beats meld perfectly with some well judged piano in the introduction and the whole song radiates calm assurance from the band, gradually building into the album’s most experimental and yet also most accessible piece. ‘Take Shelter’, the subtle closer, uses a similar formula, ending with a somewhat predictable but yet wholly appropriate post-rock aping climax. It’s these two tracks at the album’s conclusion that emphasise how far Anathema have come. This is a band writing accessible, intelligent and passionate rock music of the highest order. It’s not cool and it’s not particularly original either, but Distant Satellites beats the many bands churning out string-laden sensitive ballads hands down. For doing such a thing with so much vitality, after all these years, Anathema deserve to finally be recognised as the national treasures that they have been for some time