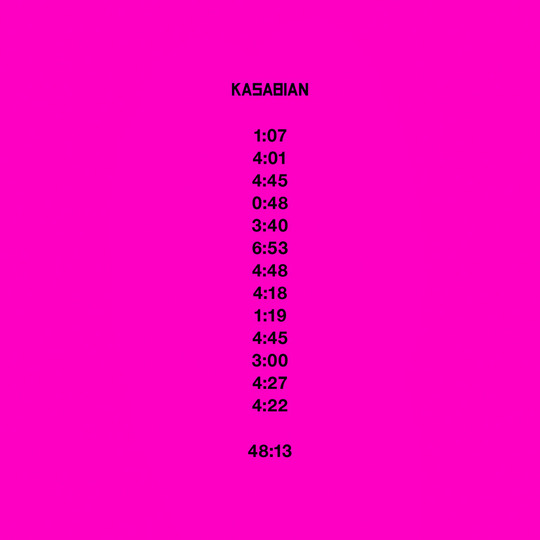 Given the wild speculation regarding Prince, Daft Punk and Fleetwood Mac, I think it’s not too unkind to say that Kasabian are the 2014 Glastonbury headliners that no-one was particularly asking for. Of course, if the band produced as many good songs as they do self-aggrandising quotes, they’d basically be The Beatles by now and there’d be no question of their worthiness (Worthy-ness?). In reality, their track record is somewhat more patchy, with the confident, electronic-tinged indie-rock of their self-titled debut and the gunning-for-stadiums bombast of Empire ultimately proving more fruitful than any attempts at experimentation on their subsequent two records. Indeed, if West Ryder Pauper Lunatic Asylum and Velociraptor! proved anything, it’s that Kasabian are at their best when at their most direct (i.e. when they sound like themselves rather than trying to be anything else). The band themselves seem to have come to that conclusion too, with vocalist Tom Meighan offering a typically bold take on their latest record: 'Less is more, you know? It’s direct. It is what it is.'

What 'it is', if debut single ‘eez-eh’ is anything to go by, is something Reverend and the Makers would shy away from putting their name to. Its chief failing is its lyrics - Meighan sing-speaks of wanting “to put the world to rights,” and while lines like “the wrong men have the power/it’s turning my milk sour” and “everyone’s on bugle/now we’re being watched by Google” vaguely capture the spirit of chatting shit with your mates in the early hours, their clunky rhymes combine with the song’s obnoxious synth line to comical effect. But let’s not be unfair. ‘eez-eh’ isn’t the only song on 48:13 - its titular running time is split among 13 songs (well, 10 songs and three parenthesised interludes), so let’s start again from the beginning, shall we?

Given the 'it is what is is' statement, it’s perhaps ironic that 48:13 opens with a red herring. ‘(shiva)’ tips its hat to the more nuanced electronic moments from Kasabian, perhaps suggesting that there’s more of that in store. But then ‘bumblebeee’ promptly comes along and blows any such notions away in incredibly garish fashion. Fuzzed up, sledgehammer basslines, super-distorted vocals and what sounds like someone shouting “BANANAS! BANANAS!” - if it doesn’t soundtrack a football highlights montage in the next 12 month then my name’s Alan Hanson. And if you were worried that there weren’t going to be any lad-rock cliches on this record, then fret not - given the number of times the word “ecstasy” is present in the lyrics I can only assume that’s what the extra ‘e’ in the title stands for.

So, first impressions haven’t been great so far, but fortunately ‘stevie’ is here to save us from this brand of electro-geezer-rock - mixing a driving beat and taut bass riff with menacing, orchestral dramatics to demonstrate that the band don’t really need to resort to maddening gimmicks to get anyone’s attention. It could also be interpreted in a sort of political light, with lines like “and all the kids they say, live to fight another day,” and “If you show us what we can’t have, what do you expect when we take it back from you?” perhaps being a reference to the London riots. After ‘(mortis)’ serves as a useful (if slightly creepy) divider, ‘doomsday’ comes back in with another honking synth riff and another lad-rock cliche (“I’m waiting for a better life, I’m waiting to get pissed”) to turn the obnoxiousness back up. The album’s seven-minute (sorry, 6:53)-long centrepiece, ‘treat’, ultimately ends up being less than the sum of its parts, with the razor-edged guitars the highlight of its first half and the floaty electronics the best feature of the second. What’s in the space in between, however, doesn’t do enough to justify the running time, least of all the repeated, meaningless mantra “everybody knows I work it/work it like a treat.”

It would be a stretch to call 48:13 a political album, but ‘glass’ is nevertheless its most concerted effort to say something meaningful. Serge’s voice echoes over a mix of eastern-tinged guitar and what sounds like something from the soundtrack to Golden Axe, delivering lines like “we are told to watch the puppets/not the strings controlling” in a defeated, mournful manner. The song closes with a thoughtful, if not desperately original monologue from Suli Breaks that ends with the words “When did we stop believing? When did we stop marching? When did we stop chanting?” But if you were expecting to be set up for a 'fuck you I won’t do what you tell me' anthem, then ‘explodes’ will come across as a lethargic disappointment. There’s some vaguely revolutionary talk in lines like “you’d rather die on your feet than live a life on your knees,” but the song meanders along without ever establishing any deeper meaning.

If ‘(levitation)’ is the band taking a brief dabble in psychedelia before remembering that it didn’t work out particularly well last time around, ‘clouds’ is the band repurposing some decidedly hippy lyrics by fitting them to a more straightforward anthem. Weirdly enough, it kinda works, with the chorus lyric “we will rise above the clouds” more likely to inspire fist-pumps than peace signs. The attempt at transcendence is promptly ruined by ‘eez-eh’ swaggering in like an obnoxious Stone Roses fan with a can of Red Stripe in each hand, but you can’t win them all, I suppose.

Still, ‘bow’ sets things right by doing another thing that Kasabian are actually quite good at - making a contrast between brooding verses and anthemic choruses. Even the wounded, end-of-relationship lyrics are actually decent, by this record’s standards at least. And then to round things off, there’s sleepy, Americana-tinged ballad ’s.p.s’, which might actually see Kasabian go meta by having a dig at the song’s very existence: “even though I know it’s wrong/I know there’s time for one more song/let’s play at scissors-paper-stone.”

If I can compare Kasabian to Arctic Monkeys in terms of relative stature (in the UK, at least), then it feels like both bands’ most recent albums serve two very different purposes. If AM was a foundation to build a brand new live set on, then 48:13 seems more like a record that Kasabian will pick and choose a few tracks from to add to their existing roster of hits. I may be wrong, but it feels unlikely that the Glastonbury headline slot will be dominated by this album. Let’s be clear, it’s not a brilliant record, but if there’s good one thing to be said about 48:13, it's that it sounds like a band coming to terms with who they are and who they’re making music for, tossing pretence aside, and concentrating on being themselves.