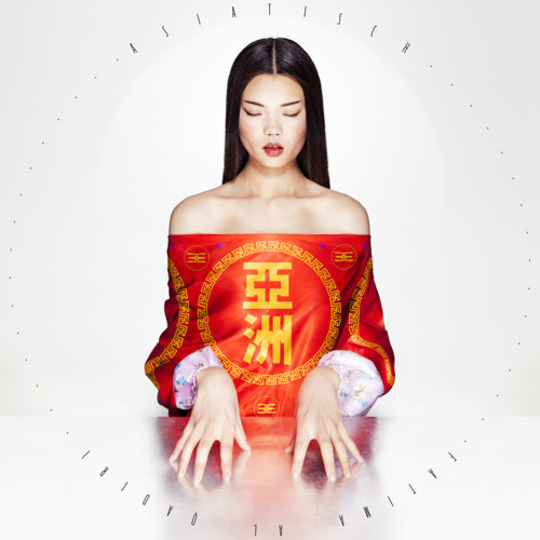 Fatima Al Qadiri may have played her part in last winter’s grime production war, releasing ‘Knight Fare (post-war dub)’ as a mischievous coda to the infighting, but right now she seems further from the riled-up production of September than anyone on the scene. Desert Strike, from 2012, was proof that the Brooklyn-based Kuwaiti can take a high-brow concept and furnish it with heady atmosphere, earning ‘Hydra’ a premier spot at the front-end of Oneman’s Solitaire Vol.1. But since then, her solo productions have veered away from the attack of her grime influences, growing more and more cerebral. Asiatisch is the end result of this process: an LP that achieves its main function of criticising western stereotypes of the orient, but often to the detriment of its songs.

The basis of the album, ‘Shanzhai', is a movement where Chinese imitations of famous brands or goods are promoted to an art form. Tackiness, blatant plagiarism and particularly suspect attempts at imitation are all tropes, and Asiatisch assimilates many of them into digs at the western-made ‘imagined China’. Synths aping traditional Chinese instruments find themselves wedged up against snippets of spoken word poetry, computerised vocals and the low bass growls that have long been a prominent feature on the landscape of Al Qadiri’s music. Sometimes, as in ‘Hainan Island’, these divergent sounds are gorgeously woven together, and you find yourself assaulted by head-splitting roars of bass and baffling, playful synth lines simultaneously, but for the majority of Asiatisch they feel stretched out too thinly for the tracks to make a serious impact on your senses.

One of the most noticeable strengths of Desert Strike was Al Qadiri’s use of space and silence, creating a slightly spooky tone on tracks when the main melodies tip-toed round her percussion. But the spaces on Asiatisch feel much more like holes - rather than punctuating the music, any momentum generated seems to drain away through them. For example, when ‘Dragon Tattoo’, whose layers of urgent synth build up towards a digitised femme-fatale vocal line, finishes, the glossy, small ‘Forbidden City’ kicks in and has neither the presence nor the quality of composition to hold its own. All that atmosphere dissipates over its two minutes. In fact, all of the interludes here - ‘Forbidden City’, ‘Loading Beijing’ and ‘Jade Stars’ - seem too sleight to anchor the album like interludes should.

Opener ‘Shanzhai (for Shanzhai Biennial)’ might be the most upfront song on the whole LP. A purposefully trashy Chinese adaptation of Sinead O’Connor’s ‘Nothing Compares 2 U’ undercut with Al Qadiri’s angelic chants, it’s the concept of Asiatisch perfectly distilled into one song. It’s also almost unlistenable after a few repeats because it only operates on one level: as a statement. This is the main problem with most of Asiatisch. And while it’s extremely easy to sit back and admire the consideration that’s gone into it, it’s far more conceptual art than it is album. Far more orientalism than sino-grime.

Speaking in a recent interview, Al Qadiri was about as scholarly as producers get: 'I’m not the one creating this Imagined China. Imagined China is a reality… The West has been creating monologues, diatribes, tapestries of sounds and visual languages of other cultures for centuries, and instilling it into its readership and educational system.'. With such an unbending focus on intellectual ideals, Asiatisch is as erudite and wildly impenetrable as its maker.