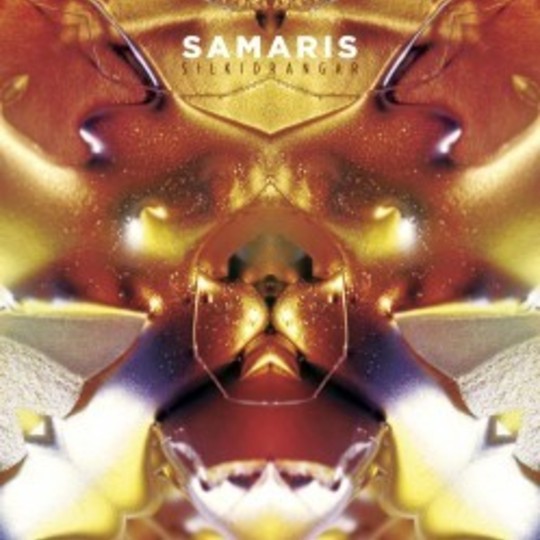 Glacial. Haunting. These are the two words that will inevitably be found in every single article ever written about Samaris (guilty as charged on multiple occasions, m’lord). But the fact is these words do an incredibly good job of describing the music that this prodigal Icelandic trio make. The spacious electronica crafted by Þórður Kári Steinþórsson can accurately be described as ‘glacial’, while Áslaug Rún Magnúsdóttir’s stirring clarinet playing and Jófríður Ákadóttir's captivating voice are both equally deserving of the word ‘haunting’.

But what do I mean by that, exactly? Well, to think of a glacier is to think of something vast, cold, and slow-moving - but crucially, also implacable. That same sense of implacability is present throughout Silkidrangar - from the methodical thud of ‘Nótt’s four-to-the-floor beat to ‘Hrafnar’s incessant synth lines. The album also lives up to its billing as ‘haunting’ - ghostly clarinet refrains will linger long after the record has finished, along with half-remembered melodies, sung in an enchanting, seemingly alien language.

The lyrics on Silkidrangar may be taken from nineteenth century Icelandic poems, but as with fellow Icelanders Sigur Rós, it’s not at all necessary to understand the language in order to enjoy listening to Samaris - the songs usually paint their own pictures regardless. ‘Nótt’ evokes some sort of midnight ritual - the way Jófríður’s voice is mirrored by a pitched-down, Fever Ray-style growl gives her words the air of a possessed chant, while the song’s synth lines swirl together in a mesmeric haze. The same vocal trick is repeated on ‘Þótt Hann Rigni’, helping it to maintain a sense of melancholy despite the fact it’s one of the record’s most propulsive moments.’ Ég Vildi Fegin Verða’ is equally bittersweet, with Jófríður’s vocal delivery offering brief moments of joy to contrast the mournful clarinet motifs.

The sea is a recurring theme, first used as a metaphor on ‘Lífsins Ólgusjór’ (roughly: ‘Life’s Restless Sea’) - the off-kilter beats and aquatic synths evoke a troubled voyage, with Jófríður’s voice charting a determined course whilst Áslaug’s clarinet lines circle like creatures of the deep. ‘Hafið’ (‘The Ocean’) feels far more literal, its slow pace and minimal composition painting the sea as a bleak, lonely place - the song even ends with nothing but the sound of waves lapping against the shore. The sparse backdrop also allows Jófríður’s voice to really shine here, like a lone thing of beauty among a never-ending ocean.

There is some light amongst the album’s darkness, however. ‘Tíbrá’ sees sun-dappled electronica, an airy vocal delivery and soaring clarinet notes combining to make the record’s brightest moment, while ‘Brennur Stjarna’ evokes the wonder of the sky at night - its flighty synths sparkling among a vast, all-encompassing expanse of bass notes. The 8-bit synth burbles and echoing vocals of ‘Máninn Og Bróðir Hans’ are suggestive of Crystal Castles’ more serene moments, and there’s a wonderfully subversive twist in which the final electronic crescendo - rather than lead to an EDM-style drop - simply fades to nothing.

Though the album as a whole is impressive, the record’s final two tracks reveal the true extent of the trio’s ambition. ‘Hrafnar’ sees Þórður excel himself, conjuring up a truly nightmarish soundscape - flickering synths and nagging, skittering drum patterns evoke briefly-seen horrors, while the ghostly vocal echoes add to the fearful atmosphere. After seven minutes of uneasy listening, album closer ‘Vögguljóð’ provides a complete contrast. An opening passage of ambient electronic noise gracefully gives way to a grand orchestral surge, with Áslaug’s clarinet joined by a phalanx of woodwind instruments as Jófríður sings a soothing lullaby. The song calls to mind the work of These New Puritans on Hidden or Field Of Reeds, and thus I can’t help but ask the question: could Samaris go on to create such groundbreaking masterworks? Time will tell whether we will look back on Silkidrangar as the band’s bold statement of intent - but for now, it’s a stunning record in its own right.