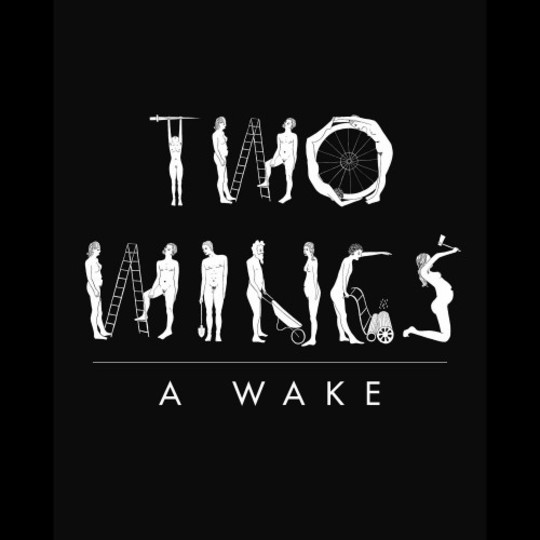 When music journalists confront something bizarre and seductively novel, there occurs a fast chemical reaction. It’s uncomplex yet oddly inevitable: as the joint impulses of fear and embarrassment collide, the writer deploys a lightning succession of bands classifiable as ‘stylistically similar’ to said bizarre and seductive novelty, a ruse intended not just to clarify musical touchstones and fill page-space but to reaffirm his shining status as an elected critical authority, fully endowed to erect totems to his generation’s right and deserving artists.

It’s a relevant phenomenon when considering transgenre Glaswegians Two Wings, whose press to date is so pungent and flowery it could get you held at customs. But in fact the well-travelled four piece, whose fusion of avant-garde with traditional folk bodes well for a burgeoning avant-bard scene, are divergent enough to lend eccentric critical shorthand an air of credibility. Look at ‘Loveless’, which is resemblant of a Kate Bush-curated tribute to the creative genius of Henry VIII; ‘We Can Show You More’, the ballad of Alisdair Roberts in Disneyland; and best of all ‘Adieu’, a ceremonial waltz that vogues down the aisle with beseeching vocals and double-track guitars like latter-day Abba featuring early Tom Verlaine. All these are surprisingly accurate descriptions, and yet you’re unlikely to credit them because super-soaking music in the verbiage of a dictionary-loving sex addict is the universal pursuit of music journalists everywhere.

Well, rest assured that Two Wings, being children of both Celtic improvisers Nalle and indie-folk’s Trembling Bells, are a very different kettle of fish. See, despite being the most palatable track here, ‘Peace-Fear’ really does sound like Stevie Nicks and Johnny Marr gargling champagne in the wings of a golden-era Guns’n’Roses video, and when Hanna Tuulikki squeals high and mighty on ‘Stranger’, a punchy folk-rock reaper ballad, it’s entirely reasonable - conservative even - to compare her with Throwing Muses-era Kristin Hersh being throttled by snakes in early-Eighties Glasgow, desperately activating a nearby fire extinguisher and powerblasting her thorax as Postcard Records staff look on with terror.

Maybe you remain unconvinced by the linguistic cascade that harries Two Wings, who jointly salute Memphis Soul and Pan-Celtic folk not with self-mockery or crudeness but commendable and whole-hearted sincerity, and nobody here blames you. Indeed it’s hard to believe that, reading an ostensibly professional review of A Wake (and specifically closing track ‘Go to Sleep’), you’d find yourself implored to imagine preteen Joanna Newsom eyeing up a pubescent Shane McGowan in a post-ceremonial céilidh hall, where frail couples nuzzle on fold-up chairs as toddlers doze in the recesses, and furthermore to envisage said preteen pair rising together in arms, cracking shy smiles and breaking into an almighty cosmic jig, dazzling stars of the dance at last - and yet that in imploring you to do so the author might not be hyperbolic or imprisonably kooky but in fact fully justified and sane, dutiful. This is nonetheless the attitude with which open-minded readers will approach such coverage of A Wake, the questing Scottish group’s relentlessly baffling, sometimes brilliant second album.

The pet project of Hanna Tuulikki and Ben Reynolds, who met on Glasgow’s improvised music scene, Two Wings sees the pair’s experimental roots flourishing into the sun. The result is an anachronistic, multicultural band that captures the magical aliveness of those years when musical self-definition and -classification vanished behind the transcendent thrill of a pop tune that pierces like a lance. As such, Two Wings are practically immune to criticism, and you have to suspect their music is so ostentatious and beamingly majestic that, in big-picture terms, it’ll barely impact their celestial radar to predict that A Wake will strongly evoke in resistant listeners the dubious pleasure of hearing Andy’s Records Bargain Bin highlights performed by Bruce Springsteen to an international LARPing convention.