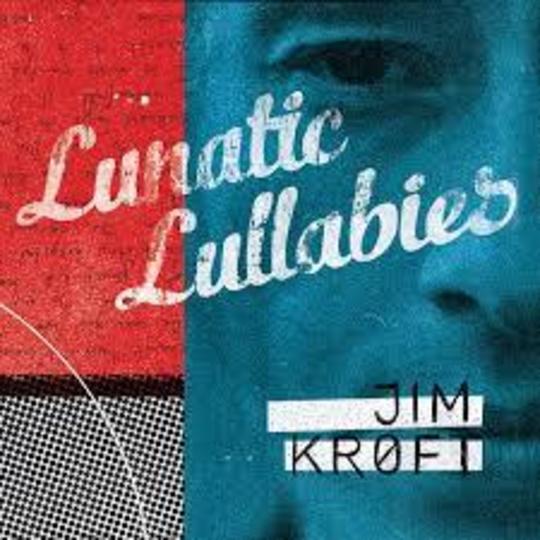 On Lunatic Lullabies, Jim Kroft’s third album, the Berlin-based Scot picks up with blustery intent where he left off with 2012’s The Hermit & the Hedonist. However, there is an immediately noticeable difference between the two records, with Kroft the jettisoning the luxuriant strings that lent old tracks like ‘Memoirs from the Afterlife’ a pleasant Sixties symphonic pop feel, that gave quaint charm to quieter tracks such as ‘Modern Monk’. While it’s admirable that Kroft should seek to explore other avenues it’s rather unfortunate that he has chosen U2-style histrionics to fill the void. Ironic it is, then, how these songs leave the listener feeling so empty. There’s nothing wrong with taking inspiration from Bono & co per se - it worked rather well on early U2 albums after all - but when U2 have followed it slavishly themselves we really don’t need anyone tossing off another Edge riff no matter how well executed it is.

On album opener ‘See How the Darkness Grows’ Kroft absolutely nails his impersonation, not only with the shimmering guitar on the bombastic chorus, but in the tight rhythm section too. There’s just one ingredient missing, and for all that Bono is a smug, self-righteous, pontificating prat, you can’t help but lament the lack of presence that Kroft exhibits in comparison, with his reedy whimper struggling to bring a memorable hook line to the overblown arrangements. Following track ‘I Hope You Know’ follows a similar sonic template, albeit with a more memorable chorus. By rights it’s the sort of song for which Kroft deserves greater commercial success, but that’s not to say our charts would be any better for it; so musically beige and blandly sentimental that’s just a step away from sounding like The Script.

Perhaps the strangest aspect of Lunatic Lullabies is that for an artist whose press release talks about him being “…part of a growing society of independent guerillas, moving with mobility and the ability to seize random and unexpected opportunities…” and plays up his being part of a Berlin art community frequented by Julian Assange, this is a record that takes so few genuine risks. It’s not exactly pop espionage either; even if there were any genuinely subversive ideas contained in the lyrics, the James-Blunt-fronting-Scissor-Sisters stylings of ‘Tell Me (Where to Begin)’ are all a bit ten years ago. ‘The Hooligan Army’ sounds like a would-be contemporary disco-rock call to arms, but ultimately recalls an angrier take on The Delays ‘Lost In the Melody’.

You also get the sense that Kroft doesn’t realise he's playing it safe as there are elements of certain songs which are so obtrusive, extraneous or incongruous that you can only imagine that they are intended as some kind of curveball or a means of spicing up the less engaging tracks. For the former see the synth arpeggios which only serve to overcrowd the melodically pleasant, but largely forgettable, pop rockers ‘There’s Something Missing’ and ‘Bye Bye The Elbe’. For the latter see the pounding toms and seventies soft-rock chugging that brutally ruins the otherwise poised combination of organ and gossamer delicate guitar on ‘Celebrate’. Most ham-fisted of all is album closer ‘Dreaming to Some Purpose’ with Kroft trying to summon gospel fervour atop a trip-hop beat and church organ. It’s a scatter-brained record, but not one possessing the wild free-wheeling spirit its title suggests.

Only on the energetic new wave/glam crunch of ‘The Loneliness of the Vampire’ and the rare restraint of ‘Through My Weakness’, which recalls The National, does Kroft craft something cohesive and in two very different ways moving. Jim Kroft can hold a tune and craft a workable melody, but Lunatic Lullabies is an album that only pricks your ears in its very rare snatches of cohesion.