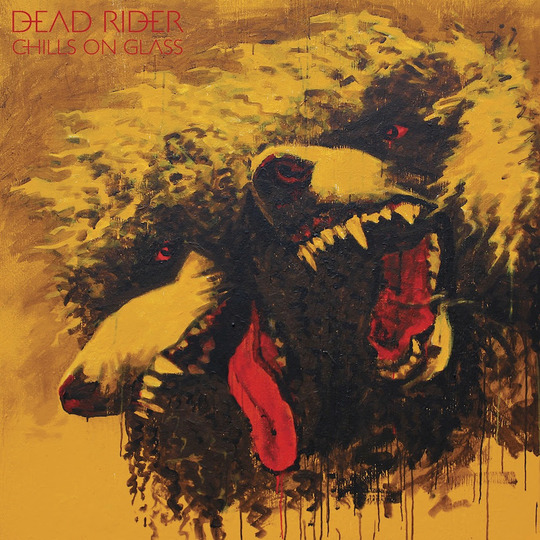 There’s something cracked in Todd Rittmann, former guitarist of twinkly noisepunks U.S. Maple, and it’s not immediately obvious what. On Chills in Glass it’s something abstract, darting between grunts and rumbles. It trickles through the music, a kind of Brainiac shock’n’roll, as joyous as it is jarring. And whatever it is, it situates Dead Rider in a pretty kind of limbo, the sweet spot between TV on the Radio and latter day Scott Walker where anything can and does happen, yet even as you expect the unexpected there follow wilder and faster convulsions.

But what is it, the horror that terrorises Chills on Glass, this scatterbrained art-funk LP whose twists and convulsions become, even weeks in, not just unexpected but unexpectable? We know that whatever it is is there by design - Rittmann takes exceptional care to sound careless - and that it’s not a note or a lyric or beat (though needless to say each note, lyric and beat is, in its way, quite adequately fucked up) but rather a sense: a feeling of cosmic displacement. And that whatever it is, this subatomic uneasiness, its shadow lurks in the music - the gastric jazz, damaged blues, slick riffs upset by hobbled rhythms - but that ultimately the underlying weirdness isn’t present in the song so much as exhumed from you, the listener.


Do you follow? What it is, is that something plagues the Chicago quartet’s third LP, something that isn’t a disjointed rhythm or ugly grunt but a warning cry straight from the spirit. It churns in the cement-mixer of Rittmann’s voice, a mournful growl which, thanks to an urgent wailing quality à la one Tunde Adebimpe, sometimes conveys a kind of tortured flamboyance which you can’t help but love. For indeed those same vocals, often gruesomely double-tracked, are so curled-in and self-involved as to erase from the music any tenor of parody or even surrealism. Instead, it seems fair to deduce that the world Chills on Glass actually witnesses is a realistic one, albeit seen through the lens of alienation.

It’s in this way that this fractal and thrilling, almost melodramatically discordant album capably explores how the modern brain ‘works’ - scare-quotes implying that we’re broken somehow, not just alienated but primitivised and inbent. Which is nothing new, as far as where dark electro-leaning indie records tend thematically speaking to stick their noses, but no less relevant for it. And the effect is total: in songs like ‘Black Screen’, this alienation via technology or capitalism or whatever is ubiquitous and recursive: echoes rebound endlessly as lonely kick drums wander, all with a certain refracted sorrow, grimly familiar to anyone who’s stalked the internet superhighways of an evening.

But while conceptually fun, Dead Rider are nonetheless a flawed group. Rittmann’s gnarly vocal might be apt, but at risk of sounding glib that doesn’t stop it being annoying; likewise the convoluted structures, likely to tire less patient listeners, despite a surprising melodiousness. Still, you can’t help recognising a kind of supreme inspiration behind the thing, fuelled alternately by manic rage and exultant gratification.

This all said, it always niggles to sensationalise the deviance of semi-avant rock music when the deep-down truth is that we all know that to capture in conventional song even one lucid moment of an existence as twisted and complex as ours is as much a fool’s errand as, say, drawing a circle about philosophy, a rhombus for feminism. The nub being that for all its convulsions and complexities and despite whatever Chills on Glass categorically speaking is or isn’t I can with absolute certainty tell you that, man, it’s an album I’d sincerely like you to listen to.