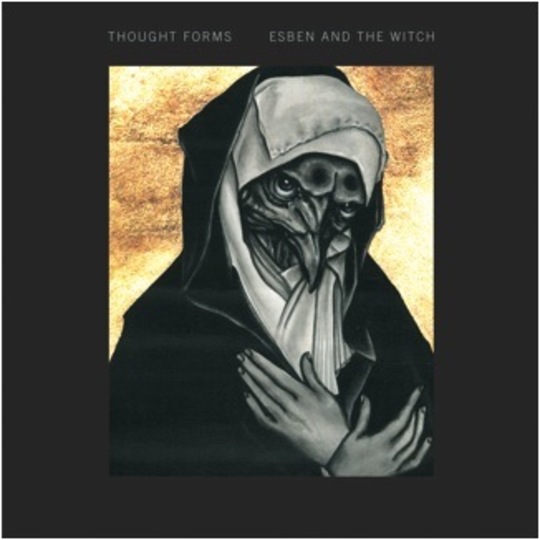 The split record is something that hearkens back to a DIY Golden Age of punk and indie, one that is becoming an increasing influence on the contemporary scene. With new(ish) labels such as Bristol's Invada and Howling Owl Records, Brighton's Faux Discx and a myriad of others handling work of a specifically Eighties/Nineties ilk, it is welcome and apt move that a new split LP has come from Thought Forms and Esben and The Witch - both bands with a certain DIY ethic rooted in the goth, shoegaze and no-wave of yesteryear.

Out on Geoff Barrow's Invada Records, this mini-album is one of incessant intellectual bleakness, with both bands dabbling in ethereal, foggy texture broken by doom-laden sonic barrage. Both aspects are catered for excellently - there is, however, very little in the way of variety. Given the length of the record, this cannot be scoffed at - it clocks in at around 30 minutes, with Thought Forms showcasing four tracks to Esben's two, a record of brief, nightmarish impact.

Opening with Thought Forms' stint, the gloom is immediately palpable. 'Your Bones' is similar to the band's excellent debut Ghost Mountain - however the band seem to have pumped the ghostliness up to Extra-Harrowing for this collaboration. It's great: all wailing, a-stroll-on-the-heath-goes-horribly-awry-as-unprecedented-mist-sets-in vocals and loose Moore/Ranaldo layered guitars. The second track is where proceedings properly begin - the appropriately titled 'The Sound Of Violence' hammering in unexpectedly after the relatively subdued predecessor of 'Your Bones': a welcome, unexpected tempo-shift bringing the listener crashing to land.

There are a lot of these tempo shifts, both within songs and between them. As Thought Forms' 'Silver Kiss' fades gently out, up jump Esben and The Witch, making it brutally apparent that they've arrived with 'No Dog'. The double-time rhythm section recalls The Birthday Party's 'Dead Joe' in its ferocity, a section of the track that is unleashed throughout after tense buildups and typically dark, melodramatic vocals. The climax of the track is stunning: "NO DOG! NO DOG! NO DOG WILL MAKE ME LOSE MY FOOTING!" the band bellow/incant; a bit cryptic, yes - but completely spellbinding.

Undoubtedly the climax and highlight of the LP, 'No Dog' is not matched by the following 'Butoh' which doesn't quite do the rest of the record justice or end it on its best note. But such quibbles are largely unimportant here: what this split LP showcases is two bands from different cities, on different labels and of a largely different generation of musicians - yet it's unified and generally very good throughout, a testament to the coherent DIY ethic and inter-band camaraderie that is flourishing in the UK at the moment.