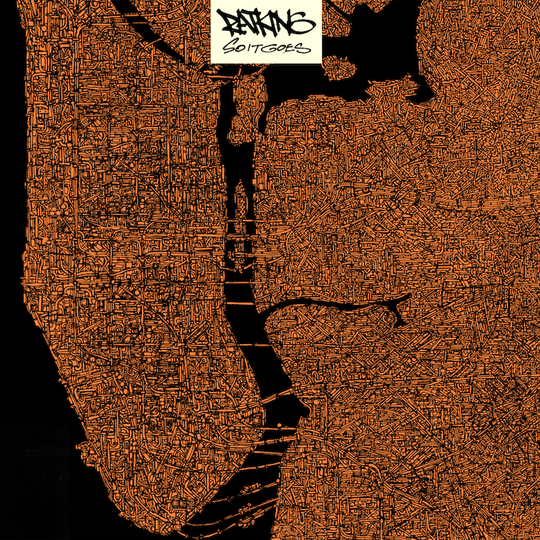 “TWENTY DEGREES OUTSIDE, TOOOOASTING!” No, not a misleading weather report, but a gleefully ironic reference that lead Ratking MC Patrick ‘Wiki’ Morales makes to his native New York’s harsh winter climate throughout the first part of ‘Snow Beach’. It’s a phrase that’s deliberately at odds with the joyous calypso-y beats that cascade around; a delightfully aural disagreement – a fine way of labelling 2014’s most exciting hip-hop collective.

For the uninitiated, Ratking (Google image search it at your peril) are a bombastic hip-hop three-piece who, as first evidenced on 2012’s ferociously-immense EP Wiki 93, channel the raw energy of the New York cityscape that’s inspired and ostracised them in equal measure. Spearheaded by Wiki and fellow MC Hakeem ‘Hak’ Lewis, their yin and yang rapping personas make for an illuminating partnership that references everything from cerebral cortices to teenage sexual frustrations. They’re in the business of trading socially-conscious verses that interweave with producer Eric ‘Sporting Life’ Adiele’s ear-splintering yet oh-so-intricately crafted beats, which utilise spoken-word samples and the most technical of instrumental segments. It makes for an at times terrifying but altogether insanely compelling musical concoction, with each listen drawing you in closer to identifying the intricacies and pure moments of genius that characterises their rather unique musical output.

And so, firmly backed by XL, the trio have deservedly been given the opportunity to construct a fully-formed debut record. And So It Goes doesn’t so much as develop on that existing material than it does blaze a new trail that leaves a pretty impervious set of scorch marks behind. At times biting like a cold morning and at others inducing near head-nodding euphoria in terms of the irresistible rhythms it thrusts in your face, So It Goes is an indisputably captivating listen that takes, as Wiki has previously asserted, “into our world”.

Beginning with ‘*’ – the lack of song title perhaps underscoring the listener’s need to focus on Wiki and Hak’s words over the more typical signifiers of meaning – on which a vocal sample rhapsodises about the need to not compare the new with the old in hip-hop (“no point of reference, you just gotta stick with the now. So it goes…”). Wiki then crashes in in tandem with the clattering beat, describing in his rapid-fire, thick New York-accented flow how Ratking came to be: “we advanced, got our advance / Copped a couple amps, now we enhanced”. Next, we’re off on an excursion down the ‘Canal’ – a wry reference to the labyrinthine New York State Canal System – and it’s another visceral exercise in noise bombardment that totally slays. Wiki delivers a killer opening verse before imploring you to “open your eyes, wake up”. If you’re not stirred from your mid-afternoon inertia after ‘Canal’, then you need your ears checked.

We’re then treated to the anti-authority sounds of ‘Remove Ya’, which is essentially Ratking’s ode to the “boys in blue”. Bookended by two vocal samples - one sees an exchange between a youth and an officer (“What’m I getting arrested for?” / “For being a fuckin’ mutt”) and the other a live recording of a nursery rhyme on the subway that laments the NYPD “catching a black boy by his soul” – it’s a collage of perspectives on issues such as racial profiling and youthful paranoia that remain such a problem for factions of America’s youth, echoing the sentiments of ‘Fuck Tha Police’ without shamelessly riding on its coattails.

The major point of contention with So It Goes arises from its choice of outside collaborators. Having proven to work so well together as a tight three-piece unit, Ratking’s decision to welcome in outsiders was always going to be a potentially tricky issue. But thankfully for every Solomon Faye spot – he really shows himself up on lethargic closer ‘Take’, a bit like SK La' Flare on Doris’ opener ‘Pre’ – there’s an exciting appearance by female MC Wavy Spice on the Latin-flavoured groove of ‘Puerto Rican Judo’, where she transcends obvious Nicki Minaj comparisons. But the finest is the vocal contribution made by Ratking associate King Krule on the jazz-haze of ‘So Sick Stories’; Archy Marshall’s syrupy chorus adding a twilit dimension to proceedings.

Wiki’s biggest claim prior to this came on Wiki93’s ‘Wikispeaks’, where he boldly declared “I’m straight New York, what a lot of y’all are pretending to be”. With So It Goes, Wiki’s enabled his bandmates to rise to his level, and the confidence they ooze on this tour de force is staggering. Brutally hip-hop with post-punk tendencies, Ratking’s debut album is a wonderfully dystopic record that is as progressive as it is anarchist. Ratking really is that thing.