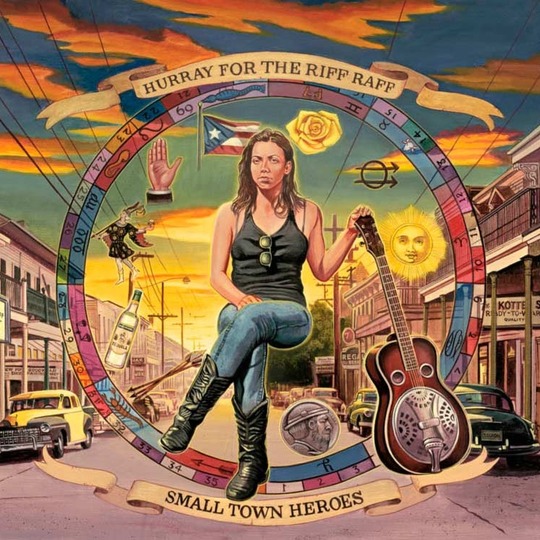 At just 27, Alynda Lee Segarra, the lynchpin of Hurray For The Riff Raff, already has a biography that reads like the outline of a folk ballad. Born in The Bronx, she left home at 17 to live a transient lifestyle, travelling the US on freight trains and falling in with a collective of hobo musicians, before finally settling down amidst the violence and disruption of post-Katrina New Orleans. More John Steinbeck novella than diary of a teen runaway, it's a catalogue of experience that belies her youth and informs her sound. So when she sings lines like "I've been hanging by a thread/I've been losing what I had/Now I'm starting to believe that the good times are done for me" - on 'Good Time Blues (An Outlaw's Lament)' - her wistful vocals carry weight, which - in an age when modern roots music is mired in Mumford/Lumineers folkster posturing - feels genuine and refreshing.

This feeling plays out across much of her latest LP Small Town Heroes. Segarra's confident understanding of Americana allows her to flit between genres and play with expectations, marrying the tropes of tradition to a broad range of contemporary preoccupations, whether it's the endemic violence that infests New Orleans on 'St Roch Blues', the heartbreak and loneliness of life on the road in 'The New SF Bay Blues' or the snapshots of burnouts and strays trapped in desolate southern towns on 'Small Town Heroes'.

It's an idea which coalesces on the album's centrepiece 'The Body Electric’, which finds Segarra offering a feminist reappraisal of murder ballads. It’s a rousing lament that addresses their continued acceptance ("The whole world sings/Like there's nothing going wrong”) and reverses the polarity of their violence; metaphorically saving the victim of the song, while challenging their perpetuation with the coda; "Tell me what's the man with a rifle in his hand, gonna' do for his daughter, when it's her turn to go?". Segarra wading deep into traditional music without getting pulled under by cliche, her subtle manipulation of well worn ideas illuminating new corners at each turn.

While this all sounds a little heavy, it's alleviated by vocals and arrangements which deliver it with the lightest of touches. Segarra's music - largely a study in restraint - inhabits a beautiful, arid landscape of tight plucked acoustics and brushed percussion, only occasionally breaking out into eager rasps of banjo ('Blue Ridge Mountain') or sonorous electric guitars ('Levon's Dream'). And her vocals, on tracks like the stripped back closer 'Forever Is Just A Day', imbue even the most melancholic moments with warmth. Segarra's dusky and mellifluous tones harmonising with Yosi Perlstein's resonant fiddle: their sound - as with the separated lovers in the song - is united across an ocean of space.

If there's a flaw it's that the upbeat numbers - despite their slickly produced allure and tendency to invoke involuntary foot-stomping - feel a little too obvious, a concession towards the mainstream that has a feel of the Radio 2 playlist about them. It's something you can't blame Segarra for doing, but songs such as 'I Know It's Wrong (But That's Alright)' and the garrulous Louisiana rumble of 'No One Else' - which will undoubtedly play well live - feel like filler when sat next to the rest of the album.

This aside, Small Town Heroes holds enough versatility and charm to captivate even the most jaded soul; songs that will wend their way into your consciousness and stay with you long after the album is done. Segarra has lived in the spirit of folk, and now it lives on through her music; the sound of traditionalist notions reshaping as she questions what it really means to be a folk troubadour in a modern world.