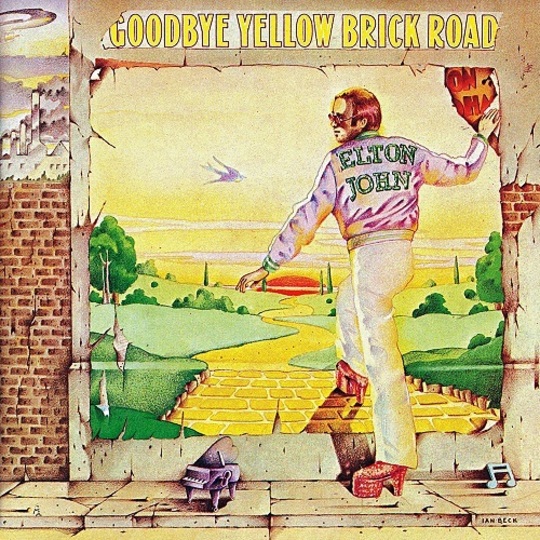 It’s only a few minutes into the previously unreleased 1973 documentary Elton John And Bernie Taupin Say Goodbye To Norma Jean and Other Things that Elton John proclaims confidently “I’d like to become a legend”.

The, quirky but compelling film tells the tale of John’s explosive, unbelievably flamboyant four year rise to international fame that was cemented by ‘73s Don’t Shoot Me I’m Only The Piano Player then somehow sharpened and preened to greater heights at the end of that same year with the release of this album, Goodbye Yellow Brick Road.

It’s his highest selling album, spawned the best-selling single of all-time and is arguably regarded as his best work. As an album it certainly has glorious moments but not all of it has dated well; some of it is painfully awkward and it suffers from patches of banality – perhaps understandable for an artifact some 41 years old and 17 songs long.

Of the masterful there is the electrifying, wildly contrived ‘Benny and The Jets’, its stuttering chorus, fake-live setting and thundering handclaps an aural joy; ‘Harmony’ with its near-magical melody line; ‘Saturday Night’s Alright For Fighting’ with its lightning bolt riff and undeniable sky-high chorus. Yet it’s on this song you get a small taste of the problem with this record – John’s lyricist Bernie Taupin.

Now sometimes Taupin’s lyrics are brilliantly bitter as on ‘This Song Has No Name’ (“Take me down alleys where the murders are done…show me the courtrooms where the judges have lied”), sometimes the quality of sixth form poetry at its finest (“On the big screen they showed us a sun / But not as bright in life as the real one” he observes on the brilliant ‘Grey Seal’ a song whose vocal style and intonation James Dean Bradfield has clearly paid a great deal of attention to over the years) but sometimes, unfortunately, he’s flat out offensive.

While ‘Saturday..’s “I’m a juvenile product of the working class / Whose best friend floats in the bottom of a glass” might be forgiven as pastiche, ‘Social Disease’s portrayal of American “white trash” with their “bulldog barking in the backyard” who “get bombed for breakfast” and are summed up as “a genuine example of a social disease” certainly can’t. It’s like an inversion of the Ray Davies’ approach to lyric writing about class issues – no sympathy, all judgement.

Things are worse when it comes to Taupin’s approach to women. On its release Rolling Stone reviewer Stephen Davis was compelled to describe Taupin’s “hatred of women” on the album as “awesome in its rancor”. It’s easy to agree.

‘Dirty Little Girl’ can’t make up for lines like “You’re a dirty little girl / Someone grab that bitch by the ears” and “Don’t show up around here ‘til your social worker’s helped” with its soaring chorus; ‘Sweet Painted Lady’ despite its ornate musical beauty can’t recover from “Many have used her and many still do / There’s a place in the world for a woman like you”. Cheers, Bern, good to know. It’s hard to get past the crassness of the glib “Getting paid for being laid” line too.

The worst offender here though might be full-band retro rocker ‘All The Girls Love Alice’ in which a teenage girl gets murdered and dumped in a subway as punishment, it would seem, for being a lesbian. “What do you expect from a 16 year old yo-yo?” Taupin has John inquire. Your jaw is too wide open to respond.

John is valiant though – even at Taupin’s worst the tunesmith makes the melodies fly; when the studio-bound trundling basslines and emotionless solos threaten to overwhelm he’s always got a charm, a certain grace that keeps you listening, often despite your better judgement. John can do nothing with the savage mis-step ‘Jamaica Jerk-Off’ though, for reasons that shouldn’t need explaining further than to mention its inclusion of the word “boogalooing”.

As an album it’s overly long – so when presented with a five disc version some trepidation is understandable. The second disc plays home to a batch of mostly interminable covers of album tracks by contemporary artists like Fall Out Boy and Emili Sande, but has bright moments in the shape of John Grant’s take on ‘Sweet Painted Lady’, which shrouds the song’s seeming cruelty in a layer of sadness, and Miguel’s ‘Bennie and The Jets’ – his puckered, half-slack delivery somehow turning the tune into a slobbering party tune.

On disc three there are demos and b-sides including another, outstanding, stripped-down version of ‘Grey Seal’, some Christmas tunes (perfectly lovely) and John’s ’75 single ‘Philadelphia Freedom’ which marks one of the many stylistic crossover points between him and Billy Joel – you’ve got to love that Seventies NY TV theme sound. There’s also the Tommy soundtrack version of ‘Pinball Wizard’. It’s still absolutely exhilarating.

The live show from the Hammersmith Odeon from December 22nd 1973 is an oft-bootlegged one that most fans will already have but it’s a stormer – ‘Rocket Man’ is predictably gigantic and set closer ‘Your Song’ undoubtedly iconic. It’s hard not to wish though, that when he introduces his most famous song ‘Candle In The Wind’ as being “about Marilyn Monroe” that it had stayed that way, a fragile, heartfelt song about a distant legend, rather than suffering the indignity of worthless regurgitation so many years later as a symptom of a country’s borderline perverted obsessions.

The aforementioned film on the fifth disc is part self-parody, part blithe silliness, part insightful – though it never feels like you get close to John or Taupin despite filmmaker Bryan Forbes (Séance On A Wet Afternoon) bizarre grilling (“Are you the Shirley Temple of the piano?” he genuinely asks).

Goodbye Yellow Brick Road shares some of the US retro-obsession and rock'n'roll tropes of other great concept albums from around that time – particularly Bowie’s The Rise And Fall Of Ziggy Stardust and the Spiders From Mars, to which it can’t quite compare in terms of vitality, iconography and attitude, and The Kinks Muswell Hillbillies from ’71 to which it sometimes seems like a mean-spirited cousin. It’s a flawed album that’s at times unbelievable, at times unbelievably bad but for those interested in investigating the moment Elton John became the legend he sought to be this is a thorough and generous offering.