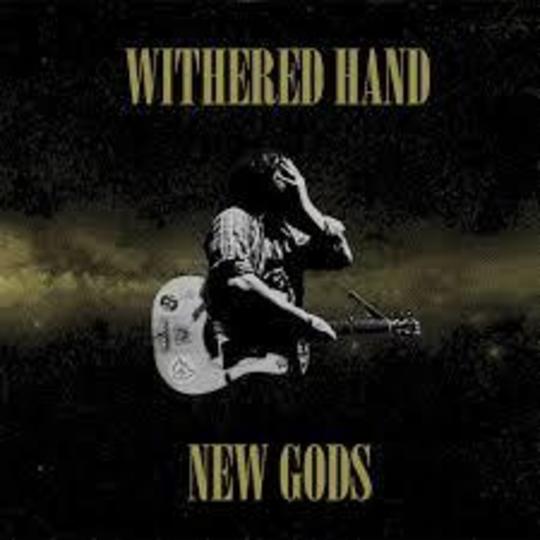 At the End Of The Road festival in 2010, Canadian artist Woodpigeon played a number of sets across the stages. At each they turned out their own lambent material but also threw in a striking cover: a torturously heartsick exercise in melodious loathing that turned out to be Withered Hand’s ‘No Cigarettes’.

Dan Wilson, who to all intents and purposes is Withered Hand, had released a couple of EPs as well as his debut album (Good News upon which the title of this second full length appears to be a neat inversion) in Scotland by that time and was slowly gaining a name for himself in 'indiepop' circles as an acoustic troubadour you could legitimately connect with, a serious, damaged but playful guy-with-a-guitar that took all the bluster and self-importance of the likes of Frank Turner and his ilk and flushed it, without fuss, down the toilet where it belongs.

While Good News was a steadfastly lo-fi affair, Wilson’s strumming accompanied by the odd bit of banjo or ramshackle drum, sometimes a stray harmony here or there, New Gods is a fairly large step from the streets of Edinburgh out into the Technicolor widescreen of California and beyond.

It’s largely a tour album, Wilson employing his self-deprecating charm on the Norman Blake-esque ‘Love Over Desire’, where “the travel pussy” is “another nail in the coffin of monogamy”. It sees him ruefully trundling through the States, offering up a doe-eyed but genuine ode of broken devotion to a misused loved one; he treads similar ground on the more upbeat ‘King of Hollywood’ a tale of On The Road camaraderie that’s both bright and amiable, as well as on ‘California’, a harmonious, reverb drenched and horsewhip beaten drone that’s pleasingly paranoid (“White light white heat all night / heart beating in my chest like a jackhammer”) and, with the late arrival of a mandolin, has all the makings of a great mid-period REM tune.

Things get considerably less sun-flecked and discernibly more shadowy on songs like the harmonica-driven ‘Life of Doubt’ which is propped up on the chilling twin couplets “I don’t want you to hold a mirror up to me / I know the state that I am in” and “I wanna give up the ghost / but the ghost won’t give up me so easily”. Though a million miles away in tone, it’s reminiscent of some of Allo Darlin’s best work – particularly ‘Tallulah’ from their Europe album.

On the darker side there’s also the moving title track, which begins with an Alex Chilton guitar groove and offers such bald statements as “I never said I was good”, then develops into a piece of studio brilliance. The wordless chorus genuinely soulful, the inspired lyric “I counted lucky stars above a field in Switzerland / New Gods for this unholy man”. It also offers the defining moment of the album, Wilson assuring his friend who claims “I used to be beautiful / and now I’m barely plain” – “Someday you will be beautiful again”. Its naïve positivity is palpable and admirable.

Ultimately, Withered Hand’s music is always about relationships and how Wilson perceives himself within them, whatever the context. It’s where he has the most to offer, as on the Babybird-meets-Fanclub swoon of single ‘Horseshoe’ where jangling guitars throb like swollen hearts and Wilson offers a typically optimistic line in the shape of “Nobody in love will ever die” as well as the golden syrup of “I wear your love like a souvenir”. The sheen of considered production and augmented instrumentation has done him no disservice – yet there are moments when you may wish the scale were a little smaller;

Closer ‘Not Alone’, with its splashes of steel pedal and broad vocal swoop is rather a bombastic gesture – previously discreet horns flail and blast, carefully considered backing vocals and harmonies become a vast gang-chant. It’s wholesome, well-intentioned stuff but certainly a little overblown – and that’s not really where Withered Hand lives.

Elsewhere there is plenty to delight in. The apparent tribute to his friend Pam Berry ‘Black Tambourine’ is a C86 goody, popping, glowing and glimmering like Evan Dando without the dickhead factor; and the horn-led Americana of ‘Between Love and Ruin’ with its evocative lines – “As the last rays of summer split the windshield in two” and it’s late-August, love unrequited feel.

You’ll find a neat tonal departure on ‘Heart Heart’ with its flip-switching pace, scratchy rock racket and pop-punk drumlins. It’s exciting, loud and desperate, celebratory (“Hardcore hardcore / listening to the crowd roar”) and not a little bizarre (“All I can see is my reflection / and it turns me on”).

Dan Wilson was writing and recording like a highly evolved teen when he first picked up an acoustic guitar in his early thirties. Now, half a dozen or so years later he’s moved on apace. Let’s not throw around horrifying terms like ‘mature’ though – Wilson is still a charmed, charming fuck-up of the first order, his naivety only equaled by his contrasting melancholy. But on New Gods there’s a sense of logical progression, an aim of expression that might have been missing from some of his earlier work. While it may dismay some hardcore lo-fiers that Wilson has spread his wings, it must offer some satisfaction that hopefully very soon it’ll be Wilson himself playing ‘No Cigarettes’ to five thousand people rather than being praised and present by proxy.