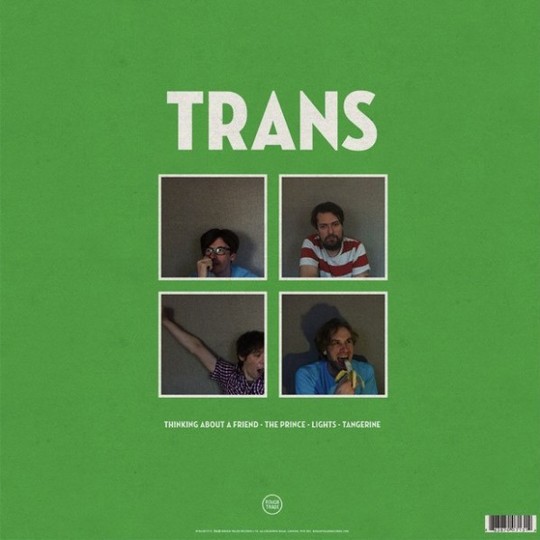 When Bernard Butler announced his 'retirement' from performing in 2008, having produced Duffy and Black Kids to international stardom, it was likely that his eventual return would be something of a low-key affair. Hence the formation of Trans late last year, a band formed alongside Jackie McKeown (ex-1990s, whom Bernard had a hand in producing), Paul Borchers and Igor Volk. Following Trans Red, which was released to little fanfare, the band have kept the colour theme going with Trans Green, the group’s second EP.

It begins with ‘Thinking About a Friend’, which is arguably the record’s ‘pop’ moment - not just because it’s the only track that clocks in at less than four minutes, but also due to its upbeat, power-pop sound and being the only song on the EP that adheres to a verse/chorus/verse structure. The next two songs are perhaps the ones which Butler’s fingerprints are at their most evident. Both ‘The Prince’ and ‘Lights’ trapeze the fine wire between overly self-indulgent twaddle and bona-fide guitar genius. While the former falls somewhat short, ‘Lights’ is a fantastic demonstration that it is possible to construct a six-and-a-half-minute minute alternative-rock song that would not benefit at all from any additional pruning. It would have stood up well on Bernard’s unfairly maligned 1st solo album, and there is no higher praise that one could give it. The EP closes with ‘Tangerine’, which whilst not matching up to what has come before, is still a worthy conclusion to the set.

Trans Green is not the sound of a band trying to conquer the world, shoot up the charts, nor will it be used as the blueprint for rock music for the next 20 years. Take it for what it is - the sound of four guys coming together to do what they love the most, and you will greatly appreciate it. It might not set the world on fire, but it sure is enjoyable.