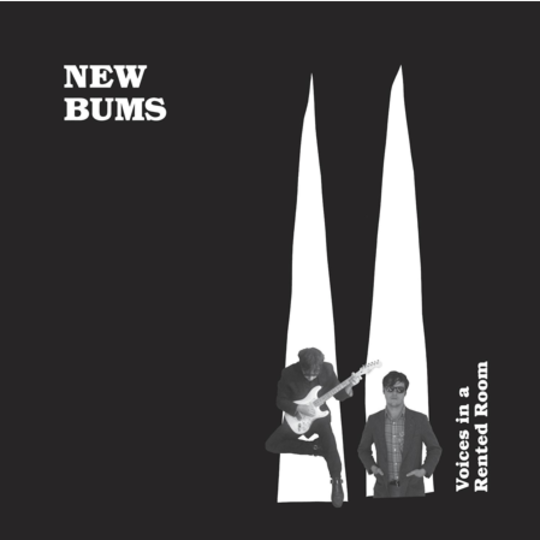 Most artists seem to gravitate towards one of two poles: either insular perfectionism, characterised by limited, painstakingly assembled releases that are anticipated with bated breath; or instead to the kind of prolific creative output that sees recording output multiple roughly with the number of shows they play.

Ben Chasny is the latter. Since 1998, the guitarist and singer has put out roughly two albums every year, either under his solo moniker Six Organs Of Admittance, or as part of one of his multiplying collaborative projects (Comets On Fire, Rangda, 200 Years). His most recent such venture, the enchantingly titled New Bums, is in collaboration with Donovan Quinn, a staple player in California’s heralded Jewelled Antler collective with his psych folk group The Skygreen Leopards.

Given the participants, Voices in a Rented Room could have been a great deal odder than the results. New Bums essentially means two guys, in the operative sense of the word, trading acoustic guitar lines (punctuated by the slide guitar, harmonica and occasional percussion) and breathy, rambling, On The Road-isms; in what sounds decidedly like a bedroom rather than any sort of studio. Overall it lives up to the press release: two drug and drink-battered survivors of the ill-feted freak folk movement settling down to write classic songs after years in the wilderness.

Opener ‘Black Bough’ has Chasny’s trademark breaking treble echoing over Quinn’s similarly croaking harmony, anchored by a simple strummed guitar over which a wandering solo is fingerpicked. Campfire songs for low rent apartments, the strapline to that title could have read. ‘Your Girlfriend Might Be A Cop’ is laid as bare as its title, ‘Pigeon Town’ is a pithy little ditty about trying to escape deadend Midwest town, ‘Burned’ a smoke on the wind guitar duel. The comfort level between the two is clear: Quinn content to play the foil and harmony to the more illustrious Chasny, who takes lead vocal and guitar almost throughout.

Chasny’s been down a more classical road before: his cover of Gary Higgin’s 1973 ‘Thicker Than A Smokey” showed that he wasn’t shy about handling more classical songcraft, but he’s never been the strongest lyricist. He’s at his best when his heavy metaphors can hang in the air or simmer as part of something larger, and New Bums falter because these shorter, tauter compositions put his vocals front and centre far too often, focusing on the lyrics rather than the delivery. As such there are more than a few egregious rhyming couplets ("seek down by the creek/I’ll tell you what you seek") that awkwardly puncture these featherweight tracks as the album drifts lazily by.

That said, when Chasny and Quinn open up the songs a little the results can be impressive. ‘Your Mother’s Favourite Hated Son’ has echoes of Chasny’s more successful low rent solo ventures, his bitter, dark baritone making a welcome appearance and cutting into gritty lyrics about a rebellious son’s tragic death. ‘Your Bullshit’ is the rare occasion when the acoustic guitars clash with Quinn’s arcing slide guitar, and ‘Welcome To The Navy’ is an offkilter, drunken brawl of a track, the percussion sliding off the bar stool as Chasny staggers his way through the lyrics ‘Welcome…to… the navy” over and over. Best of all is ‘The Killers & Me’, a dark, driving murder ballad that thrums and throbs with barely disguised gothic menace, "leaving a trail of shotgun shells and unwound Judas Priest" in its wake as it dissolves into an expertly delivered Spanish guitar line.

In general, Voices in a Rented Room is a pleasant if undistinguished record, two old friends revelling in each other’s company and mutual talents with the occasional moment of technical or emotional aplomb interrupting the bonhomie. But New Bums does little to push either contributor into new territory, nor will it stand out on its own terms in either individual’s respective discographies. Equally, there’s no escaping the record’s certain charm, a homely comfort and familiarity between the pair that has clearly rubbed off onto the music in more than just style. On bruised morning after or hollowed out evening, spending thirty five odd minutes in the hands of two accomplished and steady hands who sound like they’ve seen it all and been through it all together is a welcome enough tonic.