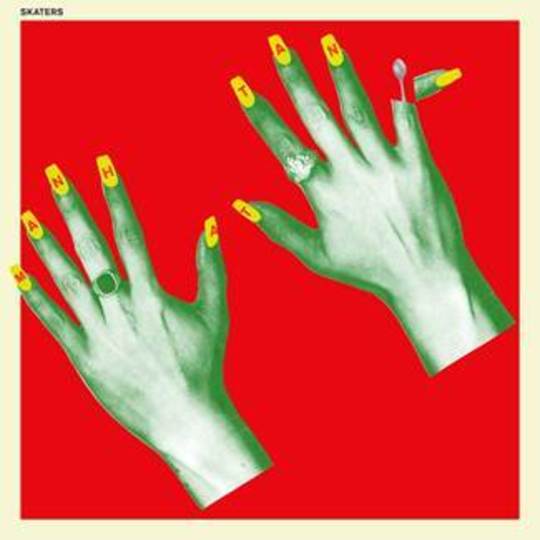 The remnants of mid-Noughties indie can still be seen and heard to this day; it’s what inundates any teen comedy series, it’s blasted out with impunity in Topshop and for many represents the commodification of the genre. I defy anyone to find a British cookery programme that won’t have the dull strains of The Kooks et al lurking in the background: a trilby wearing hangover from an era best forgotten.

Skaters are as band with their roots in this era, with Josh Hubbard previously guitarist for The Paddingtons and (briefly) Dirty Pretty Things. He seems to have brought this to the table: Manhattan is a record that sounds ten years old. It is so adamant about how carefree it is that it becomes cocky, and it is so sure of how punk and hip it is, you want to punch it in the face. Just like before.

Some of the tracks are reasonably solid. ‘Miss Teen Massachusetts’ and ‘I Wanna Dance’ are good examples of how infectious this record is, for better or for worse. The latter is a raucous bellow-a-thon, whilst the former’s back-alley grittiness picks up the slack from the opening number (the horrid ‘One of Us’) relatively well. Concise, direct and simple songwriting. However, any positive aspects of these or any other tracks is quickly dispelled by the god-awful, plodding reggae of ‘BandBreaker’ and ‘Fear of the Knife’, the only purpose of which is surely to alter the listener’s mood from Indifferent/Tolerant to Downright Angry.

It is in this half-arsed, directionless majority that you find Skaters at their worst, trying so hard to sound cool and dangerous that they fall into self-parody. Referencing cops and drugs and big nights out in Harlem, the band reiterate their credentials ad nauseum. There is no doubt that Manhattan is a youthful, romantic and genuine homage to the city’s underbelly, but constantly talking about New York as if it were its potholed, bankrupt Seventies self exposes certain flaws in the argument. To clumsily hammer their point home further, the record is peppered with recordings that Skaters have made around the city, the most inconsequential of which is the conversation with a taxi driver. We get it, guys - you’re from New York. You sort of said already.

It is undoubtedly a gutsy tactic to release a debut which is essentially a concept record, in fact it’s almost unprecedented. Sadly, the ambitiousness of the plan has served to show up the banality of the music: there is nothing setting Manhattan apart as intelligent, nor even as knowingly lo-fi and amateurish. It is churlish to dismiss a band after one record, however: there is potential here for so much more. This record, however, is the most irritating one you will have heard in a while.