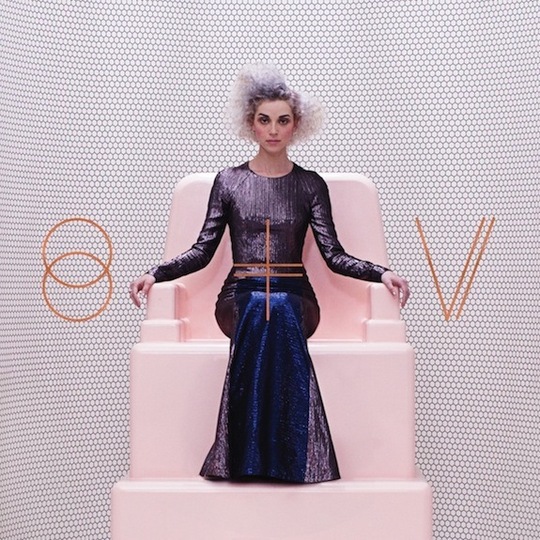 Sat on a throne and staring outwards with majestic intent, St. Vincent embodies everything we expect from an avant-garde star on the cover of her fourth solo album.

She is different to the rest of us and has a striking mass of bleached frizz to prove it. We are plebs and will never understand how she summons hip-shuddering delight from her multi-instrumental rumblings. Such are the art-rock commandments as laid out by Bowie, Byrne and the gangly prophets before them, and so they will be when a new messiah eventually arrives.

For those of us who typically worship the twin religions of Britney and Beyoncé, this is all a bit off-putting. Or at least it would be if St. Vincent was anything like as alien as its album art implies. This is a record that both revels in the experimental order of things, and doffs its crown to the unconverted masses. What else are you supposed to do when you can't contain your creative impulses?

It took 36 hours after concluding the Love this Giant tour before Annie Clark got back to songwriting. Lesser mortals would draw on debauched antics with a former Talking Head for inspiration, St. Vincent is so much more interesting than any of that. It opens on ‘Rattlesnake’, a true life story of when our oddball protagonist was walking in the Texan desert, decided to get naked and then found herself five feet away from a deadly serpent… as you do.

Naturally, the story has been embellished somewhat. A wily synth line trails alongside yelped vocals, coaxing out hisses of guitar that shudder ominously and pique in a fit of brittle dissonance. It’s an utterly thrilling start to the album - one that’s endearingly weird but free from pretension.

St. Vincent rarely feels like a record where indulgences have been taken for their own sake. Some of the credit for this to goes producer John Congleton (Swans, Cloud Nothings, The Polyphonic Spree), who allows tracks like ‘Huey Newton’ to flex and unfurl with fearsome precision. Generally, you figure Clark thrives on chiselling her eccentricities down into their most palatable form. ‘Digital Witness’ addresses society’s compulsive oversharing with a cavalcade of horns, ‘Prince Johnny’ uses soft falsetto hollers to herald a thoroughly unchivalrous Lothario and ‘Birth In Reverse’ rocks as hard as the devious ongoings implied by its title.

The songs from St. Vincent that you’ll return to umpteen times are front-loaded into its first 23 minutes. ‘Every Tear Disappears’ can be described as a misfire, too meandering to strike a guttural punch or stimulate your heartstrings. ‘Psychopath’ is a better example of the record’s second half: describing a date gone wrong in theatrical waves of orchestral haze - it falls short of magnificence by an oh so agonising margin. Let’s be clear about this, Annie Clark’s filler ranks several notches above what’s offered by her acolytes.

Anyone with a downtuned guitar and a superiority complex can shroud themselves in mystique. St. Vincent marks herself out as special because she sees the world from a different perspective - in shades of wonderment that you won’t quite comprehend on first listen.

Her reality is so much better than ours, and you know what? We’re okay with that. Just so long as we’re still allowed to share in it.