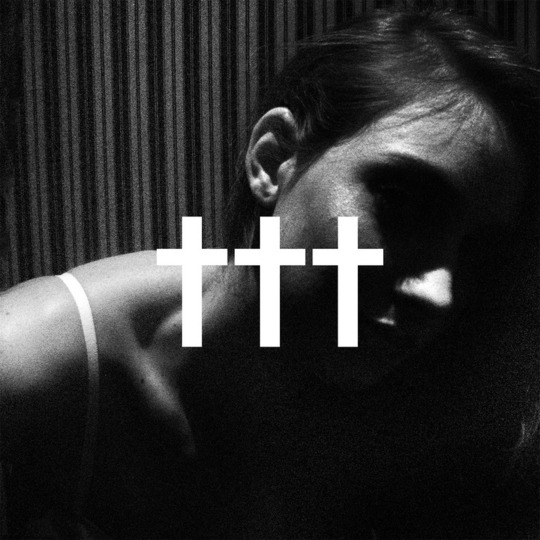 In an age of BuzzWorthy click-bait, apparently people only want to read lists. So here’s mine…

13 Things This Critic Will Not Write In This Review of †††.

1) The best thing about this album are the little Phil Collins ‘In the Air Tonight' drum fills. I’m going loco, al desko…

2) Especially the little drum fills at the end of the first line of ‘The Epilogue’ (“It’s a strange day. The roses are in bloom. But in a strange way. I know somehow we’re doomed.”). These drum fills are like a tickle from a squirrel's tail. Oh, wait, shiiit! it's a crocodile's tail... fall back!

3) Crosses is Chino Moreno - I will not copy this line from Wikipedia, and try to pass it off as my own - 'with childhood friend and neighbour Shaun Lopez, also of the band Far, as well as Chuck Doom.'

4) On ‘Bermuda Locket’ Moreno half-huffs “I can tell you shake,” and he takes a breath, knowing the next line will send a shiver down your thigh “...from the inside.” Following this brief but pregnant pause all you can do is exhale like a lizard in the sun. It's just one of this record's many graceful moments that sweep you away to the moon... and back.

6) This is not a pornolized 60 Shades of Drive soundtrack (but it could be), but it’s kinda hard to not hear that Chino had an Arab Strap phase at some point. The hints of the Scotsmen’s sodden filth are there - beneath the glitter and Prince nods - rising up the record's moist walls. Then again, this is a record recorded in LA, the city where Bukowski supped and 'frolicked'.

7) Deftones have continued to evolve from their commercial peak in the late Nineties, when MTV2 was massive and Around the Fur crossed over into the (Mini)discman's of a generation too young for Nirvana, but yearning for something far more substantial than Feeder. They were several muscular-limbs heavier than Smashing Pumpkins and to this day they continue to have a mixture of influences that finds them teetering far (FAR!) far away from many of the Sabbath worshiping metallers - they speak in interviews about taking inspiration from the best of 'em (Mogwai and M83 rather than Metallica and Machinehead). Move your mouse a few clicks away from Q Magazine or Rolling Stone, and right-thinking people refer to White Pony as a truly seminal album. Some fans may even drunkenly try to convince you that in a parallel universe it's the record Kid A could've been (or at least deserves a similar reputation as). For reasons of riff-hating cynicism (riffism?), this is not the popular opinion of rock history, but then those ageing critics were all too busy listening to Ringo's solo album and clinging to the fever-dream that Chris Martin was the thinking man's rock saviour. But this 'review' isn't about them or that.

8) I own more Deftones t-shirts than merch by any other band. Yes, if you asked me, after some careful consideration, I’d admit that they’re my favourite band. I probably shouldn’t be allowed to 'critically appraise' this record. (Think piece idea: Is it possible to be a 'critic' when writing about the singer from your favourite band?)

9) You can take the man out of the rock band, but…

10) This is not witch-house. This is not the kinda music that needs heinous genre names made up in its honour.

11) If there was a tedious, work-shirking, NO-ONE CARES Buzzfeed test you could take to reveal which Nineties alt-rock god you are, no matter how hard you try, you would never end up as Chino Moreno.

12) Strip away Deftones’ bluster and you were always going to find Moreno's soulful voice beneath the black rock. What you won’t find, is why he isn’t as revered as he should be. (Alternative review format idea: Open Love Letter which begins: Dear Chino, you are so much more than most people realise…. "I'm consumed by your danger...")

13) Beneath the ear-pummeling brutality of those bass riffs, them devil punching guitars, and the violent storms of drums, it's perhaps a struggle for those who aren’t locked-in to the world of Deftones to fully admire the sexual-verging-on-animalistic majesty of Chino Moreno. He humanises the sea of noise and is the lynchpin that holds it together, but half the time the way he emotes is the reason why Deftones detonate so much deeper in your soul than most metal, especially with indie twerps like me who don’t massively love the hurly burly goat-choking guttural GAAARGGHHH that most Terrorizer readers get off on...In Rock's hairy, heavily tattoo’d world of macho bravado and meat-munching anthemics, Chino is this calm, almost saint-like figure, offering up siren calls where most of his peers would sling a clumsy breakbeat. With ††† this side of him comes so much more into focus.

Actually, what I will write regarding that last point is this… To be fair to the uninitiated and Deftones' detractors, if you take Moreno's black honey voice out of the equation, on the rugged face of it, there isn't too much that sets Deftones apart from 'the baggy short brigade!' However, doubters better be ready to eat those baggy short retorts, his voice plus †††'s epic bloops and romantic space-ballads is breathtaking. For long term fans, this won't come as a shock. There were definite clues on tracks like ‘Digital Bath’ and ’Teenager’, as well as his previous side-project Team Sleep, that this whole other Chino was ready to step out of the band's shadow. Whereas Team Sleep was essentially gentler, elongated, driftier Deftones tunes, ††† lives on a different continent to his day job. It's a land where the sangria flows and one party becomes another. There’s a zip and kick to it, with big melodies (huge in the case of ‘Blk Stallion’) and clever turns of pace.

'The Epilogue' has a groove and Californian warmth that wouldn't be out of place on Faith No More or Incubus' finest tracks, but there's also an unnerving, after-after party in middle earth under-current that offsets the gloss. Whereas ‘†his is a †rick’ has that Fever Ray undulating drift, but with a pulsing, factory-line punch before erupting into a chorus that's closer to something from Diamond Eyes before crawling back into a world where Depeche Mode destroyed rock and roll.

Chino’s always been more of tigress on the prowl than a bull on parade and it's a joy to hear him stroll in this state of aural undress (relatively speaking, it's more short-sleeved shirt on a someone you've only ever seen in a black space suit). In rock's world of black, black and BLACK, he’s always had light and shade, but with ††† that breathy, ghostly side, reveals a slice of Bordello red paint. Or maybe it’s dried blood… With †††, it’s clear that he’s stepping further from the long shadows and walking behind velvet ropes into the purple pulsing lights of late-night clubs. Don’t get me wrong, this isn’t soft, balladry. There’s a heft at times, but it’s more of blood-rush with white-red-green orgasmic flashes than moshpit-friendly wailing guitars. The icy, subterranean synths may soothe the sting but you're well aware his T-Rex roar is lurking in the corner, and it's still as deadly as hell.

List of Alternative Sentences That Could End This Review

1) With Deftones the magic of Chino can get lost in the rock and awe, but with ††† you’re hard pressed to really notice anything else. The slithery synths soundtrack his writhing calls into the darkness, and you can't help coming back for more.

2) I could list the reasons this record blows my mind all day long. It’s 15 killer tracks, each with a different late night hue...

3) If Barry White is The Walrus of Love, then Chino is some sort of Serpent of Lust - it’s quite likely the horniness that this Crosses album induces will cause a baby boom nine months from now.