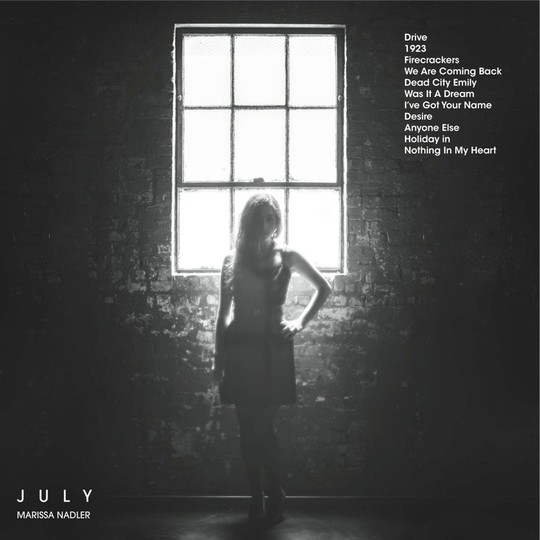 Dark rooms on summer’s days can be strange places – where children go to bed, stung by the fact it’s still light out; where office workers find themselves naggingly sequestered from a short short-clad outside world; where we try and hide, unsuccessfully, from stupefying heat.

I’m not sure that Marissa Nadler’s sixth album is about any of those things per se, but the ambiance is there, in the music, in the words, in that title, July and in the eerie black and white cover photo, in which la Nadler stands in a brick room, her image partly obliterated by the cold roar of sunlight through the window behind her.

If you’ve ever heard more than a second of one of her songs you’ll be aware that Nadler doesn’t do sunny pop bangers any more than Bruno Mars does bleak dream folk numbers. But that swoonsome sense of contrasting dark and light pops up everywhere on July, its lyrics dominated by faded memories of simpler times and reference after reference to fire, which add a faintly hallucinatory poignancy to its claustrophobic folk textures.

The most important thing about July, though, is that it’s really very good: I’m happy to say I was in a minority on this, but her last, eponymous album didn’t really float my boat, dropping all the kohl-eyed flourishes and spooky studio trickery of the magnificent Little Hells in favour of something closer to straight-down-the-line alt.country. And I totally get why a woman entering her thirties might feel she was ready to move on from spooky songs about death festooned in gothicky flourishes, but for me Marissa Nadler’s straight up singer songwriting felt like an odd use for that chilling voice.

July, on the other hand, feels just right. The keening death ballads of Songs III and demi-electronic textures of Little Hells have been ditched, but the presence of Sunn O))) collaborator Randall Dunn on production duties makes for her richest, densest tapestry to date. It sounds, I should point out, absolutely fuck all like Sunn O))) (check this out to hear Nadler doing drone, sort of), but much as the palette is kept carefully muted, everything here’s just so much more substantial: plucked guitar strings vibrate thick and heavy, with Nadler’s voice bolstered by multi-tracking and backing singers. Additional musical flourishes are discreet but powerfully atmospheric – buried shrieks pedal steel, phantasmal cascades of strings and synth, slow maelstroms that occasionally swirl and revolve into odd the Crazy Horse-ish guitar solo.

It’s still folk music, I guess, probably folkier music than Little Hells – but it’s heavy folk, not in terms of volume but presence, mirroring the thick air of summer rooms, both heated and chilled by vocals that some how manage to be sultry and freezing. The lyrics are more American Gothic than goth - most of the songs seemingly concerning memory distorted into hallucination, much of it seemingly concerning the inability to leave a room or house or city: “I was coming apart those days… I cannot recall leaving” she sighs on ‘Dead City Emily’; “I lost you stumbling from room to room” she mutters on ‘Was It A Dream’; “we are coming back, because everything is here” she coos menacingly on ‘We Are Coming back; “Some things never change” runs the surreal lyric of the Low-like ‘1923’. There’s something of Charlotte Perkins Gilman’s The Yellow Wallpaper to the more claustrophobic songs – the sense of an eternity in a confined space, while life goes on outside. And yet, the sense of dread is never crushing - there is a certain sultry summer night quality to the likes of ‘Firecrackers’ and ‘Drive’, while the concluding one-two of ‘Holiday In’ and ‘Nothing in My Heart’ have the lightest, prettiest melodies on the record, dispersing the record’s subtle tensions with deft craftsmanship.

July is a grown up album – but it’s not a cleaned up one: Marissa Nadler may flirt with the sun now, but still articulates the dark like no one else.

For Those Who Caught the Sun in Flight