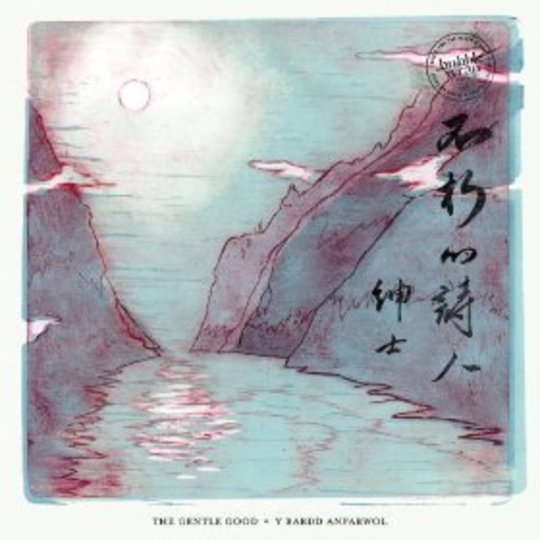 It’s hard to get a firm critical grasp on a record which brings together traditional Chinese and Welsh music. In 2011, The Gentle Good's Gareth Bonello took part in a British Council funded scheme which put musicians in residence, allowing him to immerse himself in Chinese culture for six weeks, and giving rise to this truly singular recording. Traditional Welsh-language folk music is thin enough on the ground as it is, and with the incorporation of far Eastern influences, there’s good ground to suspect this is the very first project of its kind.

One of the first surprises in Y Bardd Anfarwol is that it works at all. And not only does it work, but it actually boasts a startling sense of coherence; finding the beauty in both forms of music, and weaving them through a suite of songs as softly charming as Bonello has ever offered. Indeed, Bonello draws a lot of strength from the polarities of the traditions, gliding from one to the other in a way which lends the album dynamism and perpetual rejuvenation his earlier LPs sometimes lacked, while holding true to the record’s narrative and conceptual arc.

Perhaps one of the reasons the album is executed so comfortably is because only a couple of tracks make a firm commitment to truly melding the two cultures together. Early cut ‘Antiffoni’ is perhaps the best example of this – taking Bonello’s laid back fingerpicking and Celtic croon, but dashing it through with stabs and swirls of traditional Chinese instrumentation at the peaks of its soft climaxes.

But as the album progresses, the two styles increasingly diverge into isolation; the Chinese hallmarks rearing themselves more strongly in the instrumental interludes, with the bona fide songs sound more and more like earthy Welsh ballads. To be sure, there are some unmistakable elements of cross-cultural colourings, not least the influence of Chinese music on the very style of Bonello’s guitar work. But at large, the two cultures often remain quite insulated from one another on a track by track basis.

This is not to the album’s detriment. Indeed, this approach helps Bonello work the contrast of the cultures to their advantage, showcasing how surprisingly comfortably they can be juxtaposed, rather than awkwardly smelted. It’s striking how easily the tracks lilt through their sequencing, as Bonello lets the sounds run into each other like soft watercolours, rather than mixing them outright. He allows himself to explore new cultural territories, without diminishing the proven strengths of his own past work.

There’s a narrative about a poet entering into nature and growing old running throughout these songs, but since few are likely to have an ear for the language or a knowledge of the source material, it feels like the story might be more for the benefit of Bonello than the listener. Still, it’s striking how effortlessly the suite unwinds with a natural arc, demonstrating Bonello's natural, unshowy, non-boastful touch.

Y Bardd Anfarwol is a lovely record which stands as a thrilling travel document, while fully transcending any accusations of gap-yah gimmickry. And beyond the scope of the album’s unprecedented geographical scope, its core strength is a simpler one which effaces all boundaries, styles and languages: it’s made up of truly beautiful songs, completely irrespective of the traditions from which they emerge.