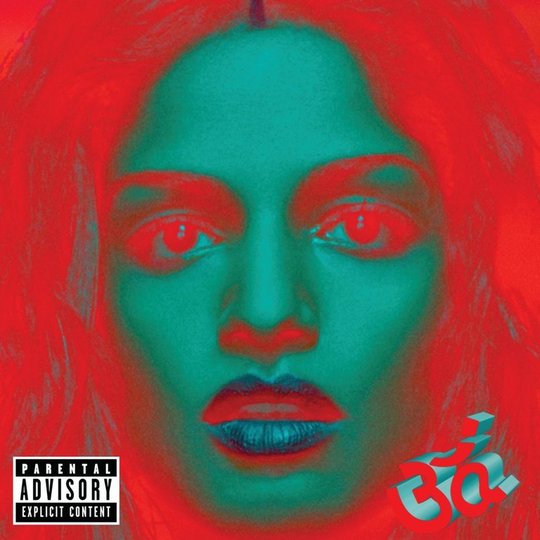 In the music video to 'Bad Girls', the first single from M.I.A.'s fourth album Matangi, women wearing printed chadors and headscarves take the wheels of expensive saloon cars, pulling all manner of stunts on dusty Moroccan roads. Their most impressive trick is 'skiing', driving almost horizontally balanced on two wheels, a feat made all the more impressive by their daredevil passengers standing on top of the car doors. The idea for the shoot, according to director Romain Gavras who also worked with M.I.A. on 'Born Free', came from discovering videos of tafheet on YouTube, a motorsport of sorts that involves, amongst other things, drifting at high speeds across motorways. For the majority of Western readers images of street racing undoubtedly brings to mind that apotheosis of car fetishism, the Fast & Furious franchise. But M.I.A.'s illegal street racers are not boy racers but bad girls, women driving in spite of the restrictions against them; a show of solidarity to the Saudi Arabian women driver's movement which has been campaigning for the right to drive for decades.

With its iconography of leopard print jalabiyas and hijabs patterned with ying-yang symbols; gold painted and neon-lit BMVs racing in barren oil fields; backing dancers turned gun-saluting ceremonial guards, 'Bad Girls' is a spectacle both real and unreal. Its mismatching patterns and religious icons celebrates identity that cuts across geographical and cultural boundaries. 'Bad Girls' welcomes you to a place that is at once local and global. "Represent the world town" as M.I.A sang on 2007's Kala.

The dense layering of cultural references in 'Bad Girls' is a visual aesthetic that very much defined M.I.A.'s previous album MAYA, with its album art of progress bars and Web 1.0 GIFs. While the production of MAYA matched the subtly of its imagery, the concept behind it was lost in the power drill samples and over-compressed sound design. Matangi seems to realise the unfulfilled vision of MAYA, here the digital debris that littered former's cover is audibly present.

Almost every vocal and sample on the album seems to stutter as if perpetually buffering. 'Karmageddon' and 'Warriors' open with a harp glissando that sounds like a clip lifted from an online encyclopaedia entry. 'Come Walk With Me', similar to James Ferraro's Far Side Virtual, takes OS X sound effects and the ubiquitous mobile phone camera flash and speeds them until they become almost unrecognisable. M.I.A.'s vocals receive similar treatment, on 'atTENTion' they are processed to sound like a female automated announcer, transforming a voice of authority into one of dissent.

Matangi, then, is closely related to MAYA, not only in musical terms, but also in terms of its thematic concerns. MAYA opened with 'THE MESSAGE', which floated the conspiracy theory that Google is connected to the government, a claim that seems prophetic now. But even with that vindication, the damage seems to have been done to M.I.A.'s credibility: there continues to be a tendency to take her politics with a pinch of salt and a serving of truffle chips. This isn't helped by an unfortunate habit of talking herself into corners in interviews (see this on her Versace range).

Be that as it may, much of the criticism levelled at M.I.A. seems singularly aimed at discrediting her. On Matangi's 'Boom Skit' she fires back at her detractors with the line "brown girl brown girl turn your shit down", a reminder that ethnic minority voices have long suffered attempts to have them silenced. 'Brin[ing] The Noise' is one way of contesting that lack of representation: music can in of itself be political even without accompanying lyrics. Asian and Middle East musical styles continue to be a way of exoticising Western pop music, the orientalism of Katy Perry's 'Legendary Lovers' being a recent example. M.I.A. turns the tables on this trend by re-appropriating all those kitsch and clichéd signifiers of 'otherness' as form of empowerment. In other words, M.I.A. wields mimicry as a weapon rather than a tool of oppression, as it so often has been used.

'Y.A.L.A.', which mimics the Drakesian cod philosophy of 'you only live once', is a case in point. Here M.I.A. borrows the acronym as her hook, but rhymes it with gibberish so that it becomes literally nonsense. At the end of song she offers "you always live again", repetition as enlightenment, as an escape from the self-defeating cycle of YOLO. There are few artists who can combine identity politics at the level of the individual and the global as successfully as M.I.A. 'Come Walk With Me' extends an invitation to "be your best friend" but in the insidious language of a social network advertisement: "There's thousand ways to meet you now / there's a thousand ways to track you down / Whatever you said and done". This sense of fatalism is checked by the following line, in which M.I.A. boldly declares that "nothing can touch me now". Here untouchability is as much to do with ostracism (M.I.A. has often mentioned her father's status as an 'untouchable' in past interviews) as it is with invincibility. Artistic expression seems to lead to both M.I.A. suggests, exclusion and omnipotence come hand in hand.

Such claims to outsider status continue to be met with considerable scrutiny, but M.I.A.'s success doesn't negate her right to articulate the subaltern experience. In this respect, Matangi is far more refined in both its statement and intent than MAYA, even if some of it is entirely superfluous. 'Sexodus' is particularly unnecessary, an encore of 'Exodus' with few noticeable amendments. And although M.I.A.'s ad-libbed lyrics and playground taunt vocal delivery is a crucial aspect of her aesthetic, clumsy lines like 'Bring the Noise''s opener "I'm tangy like Matangi" are inexcusable. But even with these criticisms, Matangi is a welcome return to form that consolidates on the agenda set out in MAYA.