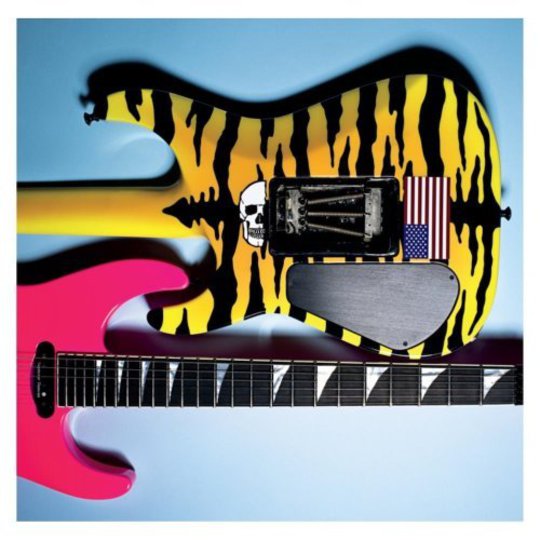 Three albums within the space of four years is pretty prolific by modern standards, and that's what Sleigh Bells have achieved by releasing Bitter Rivals before the end of 2013. The rapid turnaround hasn't necessarily come at the cost of sonic progression - second album Reign Of Terror marked a record that was both sonically and emotionally heavier than their breakout debut, Treats, so there's potential for Bitter Rivals to add further refinements to the band's sound.

If there's one thing that's immediately apparent, it's that Sleigh Bells haven't lost their sense of fun, as title track 'Bitter Rivals' opens the record with the goofiest possible bait-and-switch - 30 seconds of acoustic guitar strums, babbled gibberish and animal noises give way to the distorted, bratty vocals and sledgehammer-strength riffs you might more readily associate with the band. Couple that with a catchy love-hate chorus lyric ("You are my bitter rival/but I need you for survival") and you've got a record that comes out swinging from the opening bout onwards.

As much as one might hope to see new ideas on this album, there's little use denying that its strongest moments come when Sleigh Bells readily channel Treats. 'Sugarcane' adds a layer of gloss to that record's rough-and-ready production with silky-smooth results, and 'Sing Like A Wire's electrifying chorus recalls the 'turn it up to 11' philosophy witnessed at the end of 'Infinity Guitars' in the best way possible, with some colossal synth hits thrown in for good measure.

But there are some positive attempts to move in new directions too. 'Young Legends' feels like the band's most open flirtation with their pop/R'n'B side yet, reining in their heavier tendencies with a breezy guitar riff and dancefloor-ready beats - as well as one of the best lyrical hooks on the album, in which Alexis references the "young legends" who burned out rather than faded away, but then stops one syllable short of granting herself the same immortality ("Young legends die/and so will…"). More than any other Sleigh Bells song before it, it feels like it could sit alongside your usual Saturday night floor-fillers without anyone batting an eyelid.

There's also more of an attempt to replicate the emotional impact of Reign Of Terror, particularly towards the end of the album. 'To Hell With You' and '24' are both brilliantly bittersweet anthems, but it's album-closer 'Love Sick' that makes the strongest impression. The song flits seamlessly between brash, celebratory verses and a soulful, yearning chorus, but it's in its final moments that it really hits home. Forget the closing line about "sending gummie bears to the electric chair," as it almost feels Alexis is using it as a distraction from the simple but hard-hitting sentiment that comes before it - "There's a heart in my chest where a hole used to be/there's a hole in my chest where a heart used to be."

Not every song is a clear-cut winner, however - in particular, 'Minnie' has some moments where Alexis' already abrasive vocals veer over the line into 'grating' territory, and 'Tiger Kit' feels like its vocals are fighting to escape the confines of the song rather than being given free reign to wreak havoc. A similar issue crops up on 'You Don't Get Me Twice', with the non-sequitur lyric "It's a terrifying thing, the American dream" feeling like a great hook in search of a completely different song. None of these songs are irredeemably bad, but they lack the qualities that make other tracks on this record really shine.

Ultimately, Bitter Rivals offers the comfort of familiarity while being different enough to avoid breeding contempt. It may not end up being a hit in the charts or end-of-year-lists, but its high-voltage 30-minute running time will certainly contain at least a few highlights for existing fans to savour.