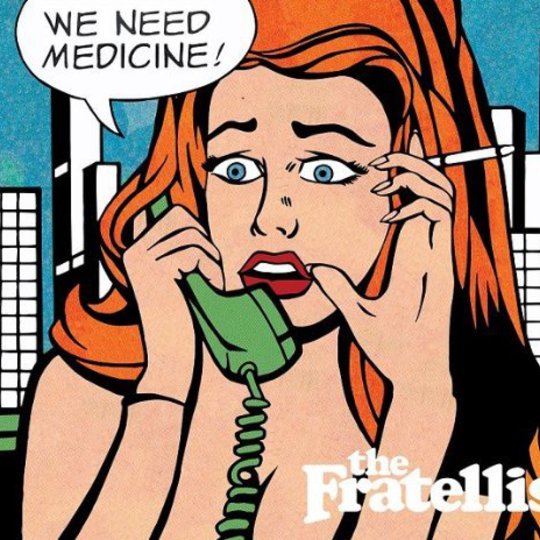 Cast your mind back, if you will, to 2006. It was then that The Fratellis released their self-titled EP, riding the wave of post-Arctic Monkeys optimism that saw indie-rock/guitar bands/'real music' hitting the charts full-force. For a brief, shining moment, they seemed like a genuinely exciting new band, thanks to the brash, Libertines-esque attitude and breakneck pace of 'Creepin' Up the Backstairs'. Fast forward a year and 'Chelsea Dagger' had simultaneously become both the band's biggest hit and a football-stadium-sized millstone around their neck, making it impossible to think of The Fratellis without associating them with terrace chants, bawdy, pint-throwing festival knobheads, and the 'proper lads, proper songs' school of praise/derision (delete as appropriate). How quickly perceptions can change! The fact that second album Here We Stand was utterly pointless didn't help matters, and the band would disappear into hiatus in mid-2009. Solo projects and stints in other acts followed, but times are hard in this age of nostalgia - and with the prospect of festival paydays, sell-out shows and the chance to unleash another album on the unsuspecting public all very much within The Fratellis' reach, you can hardly blame them for reforming last year.

So, what of We Need Medicine? Well it manages to rise above the level of Here We Stand at least, even if that isn't exactly setting the bar high. 'Halloween Blues' kicks the album off with a mix of blues-rock riffage and a feel-good, ragtime-y vibe that not even a gratuitous saxophone solo can ruin, before running into 'This Old Ghost Town', the kind of exuberant rock'n'roll number that gets a pass for its sheer energy. With its falsetto backing vocals and sharp, stabbed guitar riffs, 'She's Not Gone Yet But She's Leaving' could almost be a clumsy stab at the same style Arctic Monkeys have so seamlessly adopted on AM - but it's more beholden to traditional rock archetypes, and thus isn't as effective.

The problem is that an album can only ride along in one gear for so long before it starts to suffer from diminishing returns. By the time that jaunty hoedown 'Seven Nights Seven Days' rolls around, fatigue has already begun to set in, and 'Shotgun Shoes' compounds the problem by repeating the same plodding beat and fiddly blues guitar riff for four minutes, going precisely nowhere in the process. The record reaches its low at the mid-point, with 'Whiskey Saga' seeing the band sound like a banjo-wielding parody of themselves - though if you're willing to give them a little credit, you could consider the lyric "Here comes my audience/Pitchforks pointed my way/And it's no coincidence," to be a pre-emptive swipe at their critics (hi there!).

Still, The Fratellis can probably live without critical acclaim at this point as long as they can still connect with the masses - and if you're looking for festival-ready singalong choruses, then leave your brain at the door and come on in, because We Need Medicine has plenty of them. It's impossible to listen to 'This Is Not The End Of The World' without imagining its title lyric being punctuated by handclaps as part of a grandstanding, stadium-rock breakdown, while 'Jeannie Nitro' scuppers the potential of its driving minor-key verses with a by-the-numbers pogo-rock chorus. But if there was a prize for the most anthemic yet totally meaningless hook on the album, it would have to go to the title track, whose chorus of "We need medicine and we need it now/To get us to the end of time," can't even be passed off as new-age hippie bullshit.

The last couple of tracks attempt to save face - 'Rock N Roll will Break Your Heart' is a decent stab at a wide-eyed, upbeat rock ballad, and 'Until She Saves My Soul' sees the band throwing pretty much everything they can think of (rolling pianos, trumpet fanfares, widdly guitar solos) into the mix in an attempt to create a big finale. The problem here is the same issue that runs throughout the album - these songs have very little that makes them particularly interesting, innovative or memorable. They just… exist.

You can look at this album in two ways - it's completely inessential at best, or a cynical cash-grab at worst. It'll be enough to keep The Fratellis ticking over with tours and festival appearances for at least little while, but We Need Medicine is no panacea - and once it has run its course, it seems like it'd be more humane for the members of The Fratellis to just let the band die in peace.