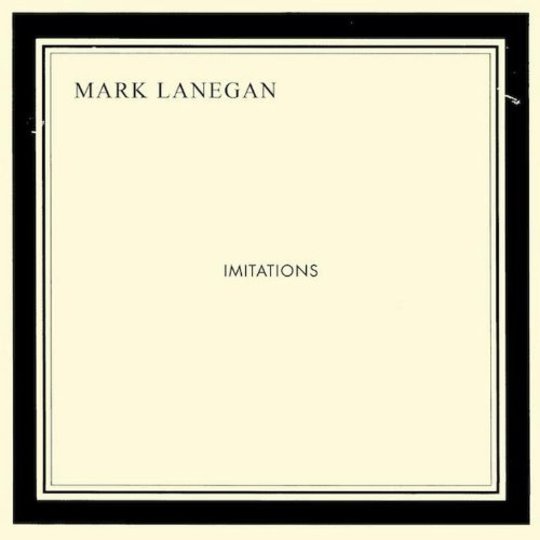 Imitations is the eighth solo record from Mark Lanegan, whose 30-year-career in music has also included stints fronting grunge legends Screaming Trees, lending some killer vocal takes to Josh Homme's Queens of the Stone age and collaborating with various DiS-approved luminaries such as Isobel Campbell, Greg Dulli and UNKLE's James Lavelle. His reputation as a fearless creative is indisputable, and his cracked-leather drawl manages is one of the most unique and emotive in modern music history.

Imitations is a covers record.

Now, before we delve too far into the content of Imitations, indulge me as I say a few words about the history of the cover version. The genesis of popular music was undoubtedly in repetition. This hasn't changed much, we will all readily admit that our favourite albums are the ones we can play again and again and again and never get bored. Modern radio and club music follows this pattern too; part of the joy is in the recognition, the ritual of thinking "I know this song, I can sing these words, I can dance these steps!" Folk songs of the past, and the popular music forms that loaned from them in twentieth century, were 'recorded' in the minds of musicians, and in the minds of their fans.

A far cry from the modern Live Lounge set, whose covers seem aimed at making arch stabs at relevancy (of which The Maccabees' reinterpretation of The Black Eyed Peas' 'Boom Boom Pow' was the cringeworthy nadir) the 'standards' of old evolved from a world where the only way you could dance to your favourite song on a Friday night was if the band at the local dancehall had figured out how to play it yet. Bands clamoured to arm their sets with all the latest rock'n'roll, RnB and skiffle they'd heard on the wireless, and these cover versions became the highlights of their sets. Inevitably, as the affordability and quality of recorded music increased, these covers started turning up on albums too. Even The Beatles' first few records were stuffed with various faithful nods to their American rock forebears. Alas, the fearless creativity of acts like The Beatles and their Sixties pop contemporaries left cover versions looking somewhat old hat, with original compositions coming into vogue in a way that has, to this day, endured.

Now, these days, cover records seem to get something of a bad rap. While sampling and collaboration is rife in popular music, straight-up covers are often seen as dull and self-indulgent, arrogant even. How dare artists try and improve on the classics? Lanegan explains that his motivation for Imitations is that 'for a long time I’ve wanted to make a record that gave me the same feeling those old records did, using some of the same tunes I loved as a kid and some that I’ve loved as I have gotten older. This record is it'. This gives Imitations something of an insight for Lanegan fans, seeing some of the records that the man himself has grown up loving. The covers here include standards such as 'Mack the Knife' and 'Autumn Leaves', along with more recent tracks such as Chelsea Wolfe's 'Flatlands' and Nick Cave and The Bad Seeds' 'Brompton Oratory'.

It's pretty good. Lanegan rearranges tracks old and new in a way that perfectly compliments his weatherbeaten tones and makes this album a seamlessly cohesive listen. The detuned drawl of these covers recalls Cat Power's classic reinterpretation album, The Covers Record. While the versions here aren't quite as ambitious or abstract as Chan Marshall's stark minimalism, it would take guts to repeat some of her more austere arrangements (removing both the iconic signature riff and the entire chorus of The Rolling Stones' 'Satisfaction' comes to mind) and Lanegan's salty croon has so much more impact when the backing still has a hint of its former swing and soul left intact.

So, we've concluded this is isn't going to be for everyone. It's very easy to make snap judgements about records like this, and a covers record will probably never pique interest in the way that a fresh batch of new material will. But for those who do take the risk, fans and the curious alike, Imitations is a touching, tasteful and rewarding listen that will not disappoint.