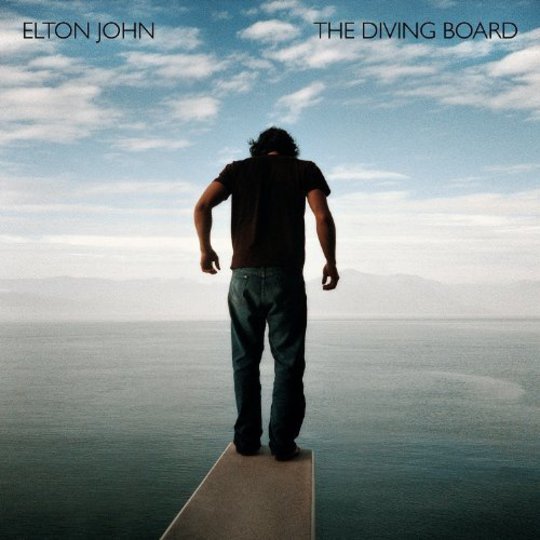 Elton John’s thirtieth studio album is, by the man's own admission, 'not going to be chasing One Direction up the charts'. That sounds fair for an artist whose career is now into its sixth decade, but any songwriter worth their salt should have the confidence to say, on the release of new material, that it’s perfect, or as near perfect as they’re happy to have released anyway. It’s not like there’s a pressure to deliver the new record to capitalize on hype.

Elton John and longtime collaborator Bernie Taupin could have spent another ten years working on this, but instead the whole thing was allegedly written in just two days. Compared to the incredible 2001 Songs from the West Coast, which displayed a mature music partnership with a finger on the pulse of relevance, The Diving Board feels like an album made by somebody who’s spent the last few years performing the same set list night after night in Vegas. Which of course Elton John has.

The once romantic tug on your being of songs like ‘Tiny Dancer’ and ‘Goodbye Yellow Brick Road’ seem like fantasy now. Instead there’s a cavernous lull in ‘Town Called Jubilee’, which is too fussy to be brilliant, down to the damn right awful ‘Oscar Wilde Gets Out’, which is disappointingly cringe. It takes a few listens of the album, all 16 tracks of it, to find the moments of old Elton you’re comfortable enough to revisit. ‘The Ballad Of Blind Tom’ is close, with a drunken Americana slant, the piano itself seemingly smashed on every note. It’s close, but there’s times even the listener can confidently say, 'I would have done that differently', and when the fan has overtaken the artist you’ve got to worry.

The overall sound of the album itself is quite charming, mostly boasting a really simple piano and percussion set up. It nearly tricks you into thinking it’s classic, but don’t be fooled. It’s true though that the more discreet the songs are, the better they settle, such as on ‘The New Fever Waltz’ which is The Diving Board’s warmest highlight. Lyrically, the song has a subtle magic which allows a small sigh of relief and respite. It’s all too shortly lived though as ‘Mexican Vacation’ swoops in with a credibility about on par with Hugh Laurie’s bluesy nonsense. This backroom dive bar rhythm and blues is purely self-indulgent.

And all of this is a shame for a big Elton John fan. There’s a tough decision with an album like this as to whether it should be allowed certain graces, and taken as it was apparently intended - just a nice collection of new songs – or should John be subject to the same scrutiny as any other artist. Had this album come from anybody else, such as chart pest Tom O’Dull, you wouldn’t find much nice to say about it. The second you start letting heritage acts slide by on former glory, you end up with the likes of U2, Bob Dylan and Green Day claiming undeserved headlines. All of this is especially true when you have such a powerful writing team as John and Taupin, while people like Nick Cave, Bruce Springtseen and even Paul McCartney to some extent do still take the time to care. We must demand more from those musical giants who have earned our love and adoration over the years, and if they can’t hack it on record anymore, they need to stop diluting the catalogue.