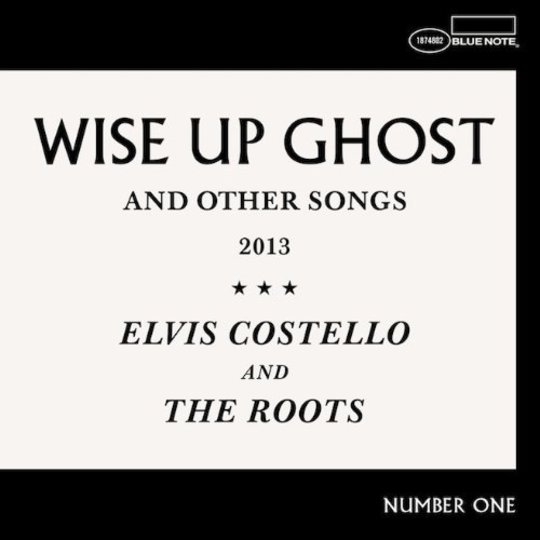 It’s like seeing a psychiatrist. There you are trying to explain your problem with it, trying to locate a solution and present as many alternatives as you possibly can, and sometimes you end up with 'Gee, I think I’m talking to the wrong guy.'

The above quote is from Tom Waits, talking in July 1989 to Elvis Costello for Option Magazine about how working with the same musicians album-on-album, year-on-year, inhibits the writing process. Costello’s best-known work was recorded with his familiar backing band, The Attractions/Imposters, but over 40-odd years of recording he’s never been afraid to look outside his comfort zone – see collaborations with Richard Harvey on Jake’s Progress, Burt Bacharach on Painted from Memory and Allen Toussaint on The River in Reverse. Therefore while no one would honestly claim to have seen an album with The Roots coming, nor was anyone likely to have been that surprised when Wise Up Ghost was announced.

If I’m left to my own devices I will discover various shades of brown. And I’m seeing them of course as red and yellow next to each other. [My wife] says what you’ve just really created here is sludge, dirty water... I juggle with brown and green and blue and red, and green looks brown, brown looks green, purple looks blue, blue looks purple. I don’t see the world in black and white but I’ll never make the Air Force.

Earlier in the same interview, Waits describes his own idiosyncratically murky, sleazy sound. On more than a few occasions on Wise Up Ghost it’s one that Costello emulates. The title track, for example, and ‘Stick Out Your Tongue’ – a reworking of ‘Pills and Soap' from 1983’s Punch the Clock – see London’s finest songwriter head towards New Orleans with funky, bluesy guitars and synths. This is something we certainly shouldn’t be surprised by; in the Eighties Waits spoke regularly of the influence the likes of Prince and Howlin’ Wolf – arguably the most forward thinking purveyors of funk and blues music respectively of their days – had on him, and there can be little doubt that The Roots are 2013’s hip-hop equivalent. Their influence seemed to push Costello to expand on that first real flirtation with black music back on When I Was Cruel back in 2002 (for the record I do appreciate that this isn’t some kind of crossover record given I’m still comparing him to another of rock’s white elder statesmen).

Lyrically speaking, Costello has always been at his best when he’s embraced punk’s anger. He’s always been more in the Paddy McAloon or Morrissey mould than Johnny Rotten or Joe Strummer, but as his decision to play the Thatcher-baiting ‘Tramp the Dirt Down’ on his recent tour suggests, his work remains fuelled by vitriol. It’s evident here too: “Some scoop gold from the dirt in the gutter/Or swallow the earth pouring into your mouth/As they bury us upright/Saying ‘Everything’s alright’” he fires on the album’s opening track ‘Walk Us Uptown’. “As cowards flee and traitors sneer/Keep a red flag flying/Keep a blue flag as well/And a white flag in case it all goes to hell.”

There are also shots at international politics. ‘Cinco Minutos Con Vos’ is apparently (it’s all in Spanish) another Falklands song; ‘Shipbuilding’ told from the perspective of the occupied. ‘Wake Me Up’ delivers devastating but unambiguous lines such as “They dragged that bruised and purple heart along the road to Palestine/Someone went off muttering, he mentioned thirty pieces/Easter saw a slaughtering, each wrapped in bloodstained fleeces” on the ongoing West Bank conflict. Without wanting to engineer any kind of political debate here, it’s great to hear an album with such bite. The closing track sounds immediately like a slightly soppy piano ballad, but lyrics such as “If I could believe two and two is five/Two wrongs make a right/Well then, man alive/Lost in my insolence and sneers/That might sound like prayers/If I could believe” belie disdain and despair.

?uestlove and co. seem to have brought out the best in Costello. Individual track-by-track descriptions can be found in our first-listen piece, but the overall sense is that they have reignited him, the combination of one of England’s great lyricists and production from arguably America’s most forward-thinking band resulting in a crisp, funky, even dangerous sounding album as political and as relevant as anything this year.

Invisible in Your City

Three Cheers for the Undertaker