Regions of the Old School 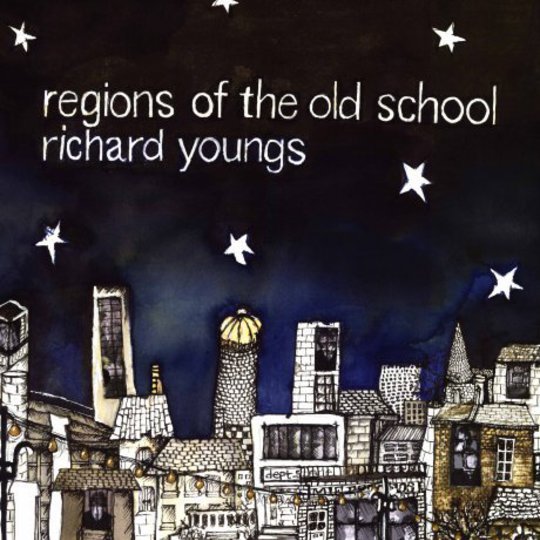 The prolific and ever-changing Scottish singer/songwriter/musician/sonic experimenter Richard Youngs’ latest LP starts in uncompromising fashion with the track ‘Insomniac Takeover’. You might think that an LP that starts with a 15 minute long song in which the words “Another sleepless night!” are tonelessly bleated over and over whilst arrhythmic percussion clatters and formless feedback screeches underneath would be a hard sell for most listeners. And you would be right to think that: it is. Whilst Richard Youngs has dabbled with accessible and melodic work in the past (most noticeably in 2010’s Beyond the Valley of the Ultrahits), Regions of the Old School is a whole other kettle of crazy and has very little to offer the listener who likes the straightforward and easily palatable.

‘Insomniac Takeover’ takes quite some getting past before you can begin to appreciate the wider pleasures of Regions of the Old School. When Sylvia Plath wanted to convey chronic sleeplessness in ‘Insomniac’ she created a character that she could observe at arm’s length: 'He suffers his desert pillow…' Youngs takes a much more direct and visceral route to the same ends: the constant yelping repetition of “Another sleepless night!” conveys the impression that he is the insomniac: the grinding monotony and pain of insomnia seeping through every pore of the track until the barrier between singer and listener starts to collapse and you begin to feel as if you’re experiencing insomnia yourself. It is an unquestionably powerful and affecting track, but also not one that most people will want to return to often.

After ‘Insomniac Takeover’, Regions of the Old School settles down somewhat: Youngs’ vocals are conspicuous by their absence until the final track; most of what follows consists of very loosely arranged instrumentals such as the meandering sci-fi synth work of ‘Another Zonal Air’ or the pealing gongs and breathy shamanic flute of ‘The Thoughtlies’. If you’ve ever listened to a band like Bardo Pond and thought 'I really wish that they’d record something more free-form and out-there' then the central three tracks of Regions of the Old School will be right up your street. Repeated listens bring out some beautiful sonic gems: from the physical feel-it-in-your chest sub-bass that makes occasional intrusions to the manipulated vocals of Madeline Hynes, Youngs’ wife, who guests on ‘Celeste’. The production throughout is one of the real strengths to Regions of the Old School: each instrument has room to breathe and there is a real physical immediacy to the thump of the percussion.

After being AWOL since the first track, Youngs’ vocals make a welcome return at the very end on ‘My Love Holds the Galaxy in Her Heart’. With a warm and intimate delivery he intones the title and other cosmic-scale imagery and then finishes the record off with a suitably gargantuan fountaining of feedback-drenched guitar. All of which does rather remind you of what so much of the rest of Regions of the Old School has been missing. On previous LPs such as Under Stellar Stream, Young’s vocals were a real strength and if you are expecting similar vocal mantras on Regions of the Old School you will be disappointed. However, it seems churlish to praise artists such as Youngs for their constant innovation and commitment to variety and then slate him for not repeating previous successes.

Ultimately two key factors will probably help to place this record in the considerable Richard Youngs cannon: this is the first 2LP he has ever released under his own name and he has another release, his 'country music album' Summer through My Mind, down for release later this year. It is possible therefore to see Regions of the Old School as a place for Youngs to clear the table of the longer and more demanding pieces that don’t fit with this country music aesthetic before the release of Summer.... Whether this is actually the case or not the fact remains that Regions of the Old School contains some challenging and interesting musical experiments but that they do not always cohere into a satisfactory whole. Fans of the more straightforward and vocal Richard Youngs releases would probably be best advised wait for Summer...; fans of the out-there and musically diverse experiments should lap this up.