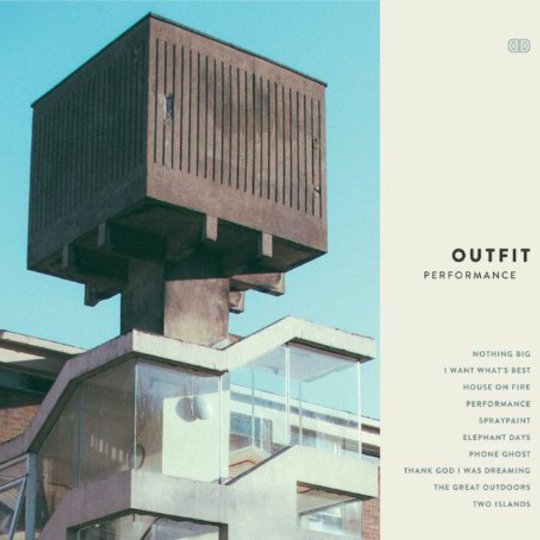 A collection of enigmatic locales figure heavily in the aesthetics and self-constructed myth of Outfit’s debut record. There’s the 20-bed Merseyside mansion and part-time artists' colony that provided their foundation-stone, with the miraculous block of abandoned flats in its grounds that operated as their recording space. The theme even continues in the brooding hallways, back-rooms and pews of the vague institution that houses their press shots. Finally though, heralding Performance’s arrival is the concrete monolith that adorns the album artwork, which stands stark and discomforting against the clear blue sky - jutting out from the bland Seventies architecture like a spore.

Fittingly, the band’s creative output often feels like both the appropriate product of and soundtrack for such off-key milieu, their taut, new wave-influenced psych-pop indebted to the atmosphere and textures their songs are steeped in.

In that key, Performance is at its strongest when at its most queasily expansive and intoxicatingly patterned. Growing out of the Japan and Interpol-shaded gloom that pervades the start of the LP, ‘Spraypaint’ captures a particularly unsettling quality through the menacingly slow percussive tock and synthesised piston pop of its verses, the instrumentation and tone confidently hewn of a clashing fabric with the lush, strangely romantic chorus.

‘Elephant Days’ succeeds in a similar vein by combining its soporifically sweet harmonies with the extended ruminations of the bridge. The space and rising tension of this instrumental section reflects the band's knack for finding a groove and propelling their songs through it, and here it’s presented with clarity and control, the repeated waves finally switching out at the crucial and most satisfying moment.

However, this seizing upon their house and dance influences and letting a looped movement run - allowing themselves room to breathe and yet having the foresight to cut it off at the key moment before drudgery sets in - is a feature that could do with becoming a habit. ‘Nothing Big’, ‘Phone Ghost, and perhaps most disappointingly first single ‘I Want What's Best’ all grow increasingly numbing as their wheels keep turning. Whilst the rhythm-section thrive as the integral foundations that ensures Performance holds up to scrutiny, even the quintessentially propulsive bassline of the latter ultimately comes a cropper to a lack of punch over the course of the track’s run-time.

The vocals are the greatest victim of this tendency for over-recurrence, epitomised again by ‘I Want…’, as the infectiousness of the chorus grows stagnant, their impact diluted after a few repetitions too many. Melodies overwhelmingly occupy the same subdued territory, and the sturdy but invariable drabness that dominates becomes all the more disappointing when Andrew Hunt and Thomas Gorton do burst free of their self-imposed shackles. The aforementioned ‘Elephant Days’ and the floating, sultry ‘Thank God I Was Dreaming’ showcase the pair’s capacity to complement one another as the band expand onto grander canvases, while the ace, euphoric closer ‘Two Islands’ packs a tantalising vocal urgency in its chorus that finally answers the lyrical hook of opener ‘Nothing Big’ “Can anybody hear us?” with an affirmative.

The plethora of positives within Outfit’s sound undoubtedly mark them out as an immensely talented, imaginative new band, but the moments where these positives coalesce can be so electrifying that it makes the absence of them elsewhere feel all the more pressing. In a similar manner to closest contemporaries Django Django, this is a debut packed with resourceful ideas, textural intrigue and compelling rhythms, which ultimately falls short only from a sense of unfulfilled potential and a lack of consistent execution.