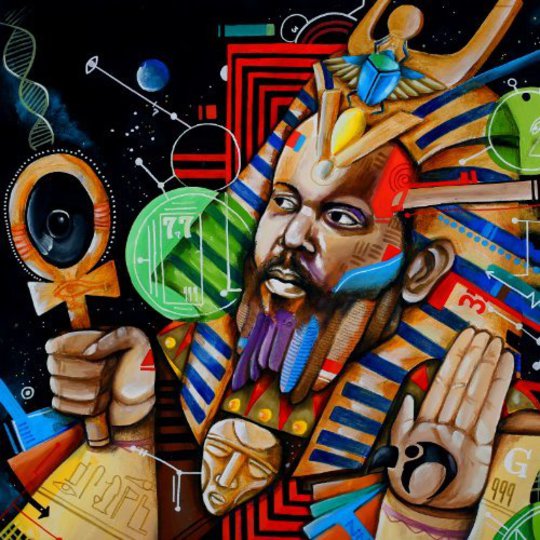 Jazz composer Sun-Ra used his music to connect spiritually with outer space. He once called it the place, that vast unknown from where he claimed to derive and wanted to return. That made Sun-Ra difficult to grasp. He was called bizarre. Long before Miles Davis blended funk, rock and jazz, Sun-Ra pushed the genre into the cosmos with spacious grooves and abrasive horn freakouts. The music rarely had a destination, at least not to anywhere on Earth.

Los Angeles producer Ras G is influenced by Sun-Ra’s celestial lens. His 2011 album, Spacebase is the Place, borrowed directly from Sun-Ra’s Arkestra and updated it with random vocal samples and futuristic sound. Accordingly, Ras G’s new instrumental album, Back on the Planet, revisits Sun-Ra’s esoteric jazz with equally obscure breakbeats and intergalactic synthesizers. While it scans as hip-hop, Planet is full of distorted loops and cosmic clatter. Rhythms are out of time and feel on beat somehow. It’s tough to distinguish one song from the next, and as a result, Planet feels like a continuous journey through a boundless continuum. This is a soundtrack for space travel.

At times though, the album feels a bit too avant-garde. In Ras G’s quest to be different, Planet runs the risk of alienating even the most devoted listeners with its overly cryptic formula. You have to be in a certain mood to enjoy this, or under some sort of psychedelic influence. Even the song titles seem random: ‘OMMMMM…’, ‘Injera, Lentils, and Kale’, ‘CosMc Lounge Kisses’. They do nothing to explain the music at hand.

The title track, for instance, is a noisy procession of crashing drum cymbals and thunderous commotion. There’s no real rhythm here, instead, it’s a mission statement for the album to follow: “It’s like a whole ‘nother world up there”, goes a vocal sample on the song, “a whole ‘nother planet”. The same goes for ‘Asteroid Storm…’ and ‘Find Ya Self’; both are aimless and belabor the point. In fact, few of these songs take shape. They’re built around loosely coiled samples, random vocal clips and airy drum breaks.

The results are impressive when Ras stays close to the ground. ‘One 4 Kutmah’ is a buzzing procession of canned drums and high-pitched squeaks that evoke California contemporaries Madlib and Georgia Anne Muldrow. ‘All Is Well…’ channels Brainfeeder label mate Flying Lotus with Indian-themed dance music. On ‘Natural Melanin Being…’, Ras opts for reggae dub: a steady organ loop is underpinned by wafting synthesizers and a jumping bass line.

In its totality, Back on the Planet works as a decent upgrade from Spacebase, despite its weird results. Much like Sun-Ra, Ras G tries to link with life far beyond this world. In doing so, he’s created something that won’t resonate immediately. It’ll take several listens — or years — to understand its full meaning.

To the Happy Few