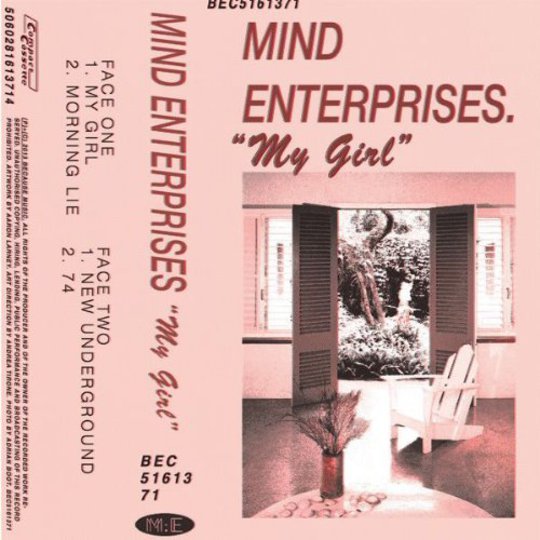 I am deeply in love with music. Deeply. I can spend 24 hours playing the same note over and over but I don’t get bored, because I am slightly mad.

Imagine the above delivered in the deliberate tones of an Italian producer and you might expect the interview to end with ‘My name is Giovanni Giorgio, but everyone calls me Giorgio.’ You wouldn’t be far wrong. Andrea Tirone aka Mind Enterprises is a Turinese-born producer who has gravitated to London and eschewed the sunlight in favour of his own elusive nocturnal world.

‘I can’t work in the light’ he recently explained to the Guardian, ‘I don’t like to have the world going on around me.’ It’s an idea that’ll be familiar to countless bedroom producers, those precious hours where time hangs still and the only illumination is the warm glow of the laptop screen. For Tirone this is a world of hushed, multi-tracked arrangements that orbit your speakers in a hazy wash of texture and colour. Lead single ‘My Girl’ demonstrates Tirone at his most promising. Its pen-click percussion and drifting cobwebs of synth are gorgeously paired with a plaintive falsetto "will you be my girl / will you follow me blind / and waste your time?" For an artist so avoidant of natural light, this song is imbued with the natural, hazy radiance of a summer evening, destined to evoke nostalgia through its sheer warmth alone.

Throughout the four songs on offer here the well-trodden formula of ping-pong reverb + shimmering electronic washes + wistful vocals are toyed with and modified to varying degrees of success. ‘Morning Lie’ has an undulating tension-and-release that pulls you in with its watercolour swirls, but it’s hard to offer the same praise to the other two tracks. ‘New Underground’ and ‘74’ may be crafted from the same ingredients, but they sound more like exercises in looping and arrangement rather than fully-formed songs, giving them a feel which is distinctly equal to the sum of their parts.

It’s arguable that those who have benefited most from the implosion of major labels and the digital-democratisation of music is artists like Mind Enterprises. Those who may once have been forced to practise their posturing in the garage have been given the freedom to retreat to the bedroom and hone their craft. The list of indoors-types generating some serious bars on Spotify is endless (Baths, Memory Tapes, Matthew Dear, J’ai Paul, Autre Ne Veut etc), and whilst it’s now easier to put your music out there, carving out your own niche is almost an impossibility.

Ultimately, My Girl achieves this in part, but there’s a thousand demo tracks rattling round MacBook Pros all over the country that sound a little too similar to the likes of ’74.’ Tirone needs to step into the light and develop the shimmering splendour that separates the title track from sequenced-loop anonymity. There’s a brilliant debut LP inside that laptop, I just hope it reaches the light of day.