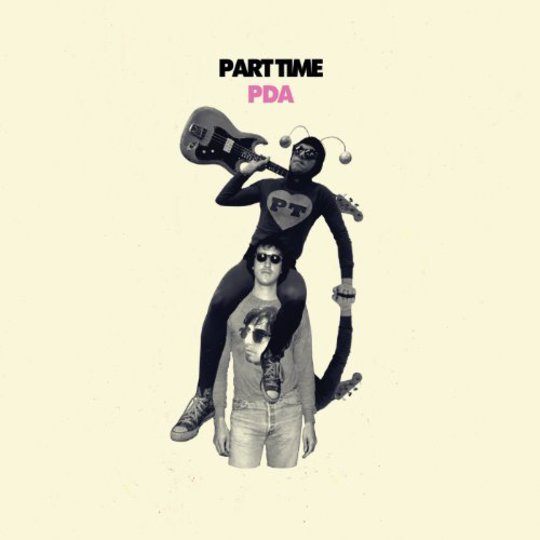 Blame Drive, or maybe just blame Chromatics. Actually why blame anybody? The jingles, synth and sugary sleaze of Eighties art-pop have long been the focus of revivalist trends. Are we still hearing this approach because it's easy to emulate, or because musicians have a genuine ache for the synth of yore? Recent successes Ariel Pink, Mac De Marco and Twin Shadow each brought their contorted imprint to a side of pop long thought criminally uncool, in turn kick-starting a critical reappraisal of the less hipster friendly acts of the 80s. Enter David Speck of Part Time, a shaggy haired San Franciscan layabout with a penchant for ridiculous power pop chord progressions and youthful inanity.

PDA marks Speck's second release on the Mexican Summer label following a rough pick n' mix debut back in 2011 called What Would You Say?. Maintaining the musk-filtered sound that characterised his early releases, Speck adds an element of creative lunacy that animates his music beyond pointless derision. Opener 'I Want to Go' is a short, playful kick into the sound that engulfs much of the records playtime; noodled guitars and jangly riffs fill the mix largely eclipsing his near satirical croon. As the album progresses through a goofy series of songs about youth, volatile relationships and personal turmoil, it becomes clear that Speck isn't just a fool aping the past (though he does that too).

Early highlight 'Living in the U.S.A' is a danceable ode to the emptiness of big city living: “It's not the same/living in this U.S.A/ It's not the same/I'm dying in this U.S.A/Killing me/Killing me/Killing everybody” he chants in the final verse. What makes the song-writing on PDA stand out is the juxtaposition between the optimism of Speck's musicianship and the frequent self-deprecating, cynical musings. Later on 'Funny Moods', his vocals become clownish and erratic under nightmarish layers of cartoonish samples. Kazoos, maracas, party horns and belching act as the instrumental; it sounds absolutely ridiculous and could easily be mistaken as a warped out-take from Frank Zappa's Joe's Garage. If you can stand it, repeat listens reveal Speck is using the sounds as a metaphor for the alienating behaviour that has left him estranged from a certain girlfriend. “I'm sorry for times I've been so rude/ I've nothing to blame except my funny moods/ if you wait for me girl for just one more day/ my funny moods girl will just go away” he cries, swiftly followed by another jam on the Loony Toons soundboard.

As an concept, Part Time works best at its simplest and most familiar with Speck proving his convictions above the pettiness of argued nostalgia. Stand out track 'All My Love and All Your Love (Together We Are Fine)' is a slow, ambient disco track that testifies this on every level – Speck's vocals are mixed with an understated echo while waves of bass licks hook the song secure in memory. None of this is original, nor particularly appealing for anybody disinterested in a by-gone era of music production – still it's enjoyable on a level that no amount of cerebral analysis will ruin. Speck's music is wrapped in the same eccentricity that leaves the work of Bowie, Byrne and Devo so appealing to new audiences today and like the best of them, no historical context can dampen that. An enjoyable, knuckle-headed journey into one man's vision of perfect pop.

Love Songs for Our Husbands