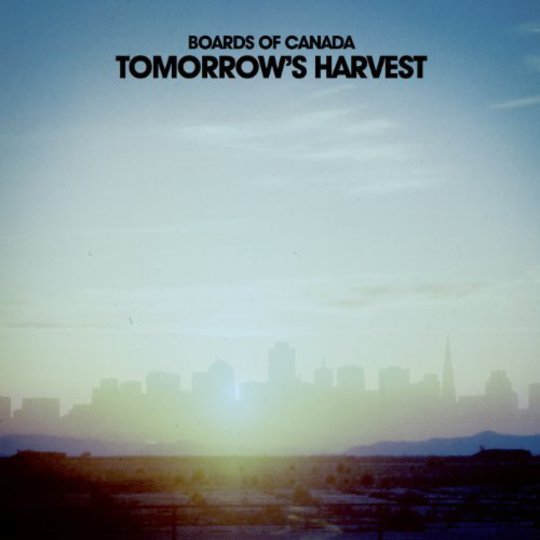 Following one of the most effective teaser campaigns since the car wash scene in Cool Hand Luke, Scots electronica titans Boards of Canada are back from their seven year lay-off. The atmosphere they hinted at with their May test transmission video was accurate: after the textured guitars and beach vibes of 2005’s The Campfire Headphase, Tomorrow’s Harvest is cold and sinister, its themes harking back to the 'New Clear Dawn' images the band posted before vanishing. These 17 vignettes glow with Cold War paranoia, picking up where Threads, the most scarring piece of TV ever made, left off. It might also be the duo’s most accomplished album yet - and that’s coming from someone unable to remove the Hi Scores LP from his stereo.

Tomorrow’s Harvest very quickly shows everyone who’s tried to ape Boards of Canada what they’ve got wrong: dreamy IDM with a sinister accent; chunks of nostalgia built from energy commercial keyboards. Opener ‘Gemini’ subverts the band’s intro/jingle formula with a trumpet fanfare and icy strings, somewhere between the Blade Runner titles and an arctic Attenborough documentary. Those familiar Yamaha CS-70 synths build to a whirling rhythm, leaving the likes of ‘Telepath’ to fill the jingle slot, playing analogue pads over which a voice rasps ”Testing/1/2/3/4/5/6/7/8/9/10/Up/Down”. The brothers are a lot more confident in their world, with a sci-fi melody on ‘Nothing is Real’ given gut-punching beats, and ‘Transmisiones Ferox’ using a wall of bass to remind listeners of the power of ambient music.

But the meat on Tomorrow’s Harvest is the Sandisons augmenting their sound with more complex drum programming and richer keyboards. Seven years rehearsing has seen them come up with tunes so layered a geologist could examine them, with ‘White Cyclosa’ playing ticking pads over ominous low-end, and featuring melancholy organs that reference John Carpenter’s soundtrack heyday. ‘Palace Posy’ is almost jokey, its stabbing keyboard beats like a synth collector having his head slammed in a fridge, while ‘Reach for the Dead’s arpeggiated notes and lisping beat recall Music Has The Right To Children - if it had been swathed in static electricity. Even ‘Semena Mertvykh’, the drone-like trailer for the album, warns of coming darkness and a desolate Videodrome-like future. Whatever darkness the Sandisons are predicting, we’ll be lucky if we look like East Berlin when it hits.

Eventually Tomorrow’s Harvest reaches a resolution, having managed to successfully touch every part of Boards of Canada’s back-catalogue. Like My Bloody Valentine, BoC give believers what they want and then carefully expand on it, taking us to the didgeridoo hum and high C of ‘Uritual’, and the rousing bass/pecked stringed instruments of ‘New Seeds’, possibly a message in Morse. Like a few moments on Tomorrow’s Harvest it’ll take many more listens to decode, but the bulk of the album is immediately dark and succulent, conjuring a beautiful air of malice. What began with a Record Store Day treasure trail ends with something that fulfils our bravest expectations. The next seven series of Top Gear have got soundtracks to glide Porsches across ice to.

What Happened To The Get To Know Ya?