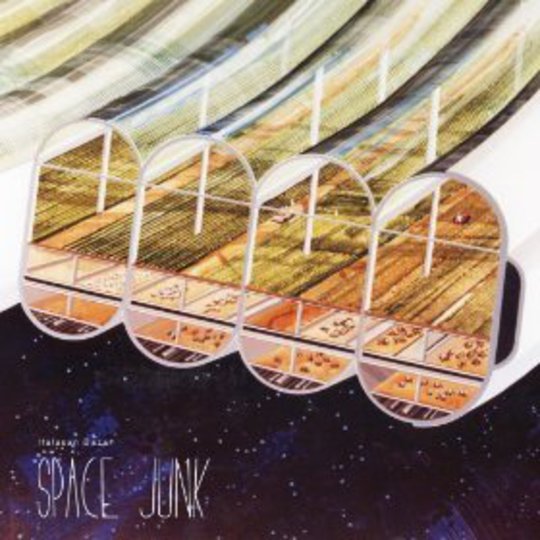 Halasan Bazar are counterfeiters: rarely has a Copenhagen-based guitar group sounded more like Sixties’ Californian college dropouts immune to soap, dope and employment. Fredrik Eckhoff and his bandmates are in a Dr Evil time warp, refusing to acknowledge any new technology since Woodstock and playing a blend of the groovy pop songs that inspired their parents’ generations to tune in. They put as much heart into this second album of hippy ditties as they can, and create some scratchy, eight-track quality hits that howl and frolic like coyote cubs.

Anyone nostalgic for the summer of love, or Halasan Bazar’s cassette debut How To Be Ever Happy, will be pleased to know things haven’t changed much. ‘You & I’ combines crackly drums and a rock riff like budget Moby Grape, while ‘Schitzofranium’ plays with drowsy harmonies and a newscast of unspecified beatnik riots. The band seem to be aiming for one drawn-out fuzzy high, determined to hit you with tambourines until “love” and “peace” becomes your entire vocabulary. After a three track run, however, their formula begins to waver: ‘Live Without Love’ edges towards country with its cymbals, double bass and tales of love around the campfire, and ‘Stay’ sends Space Junk into civilisation with indie rock guitar and percussion like a Morris dancer’s rousers.

It’s not the only time Halasan Bazar move away from the hippy camp: ‘Sometimes Happy, Sometimes Sad’ blurs the guitars and Eckhoff’s voice into a shoegaze-like fog; ‘Wondering Why’ takes an urbane folk melody and gives it Billy Bragg lyrics (”You fought in a war…”), pumping bass and spaced-out yowling. It’s one of Space Junk’s more surprising moments, and it makes Eckhoff and chums sound unpredictably like a faltering hippy band and Supergrass when they still had sideburns.

Whatever Halasan Bazar’s intentions with Space Junk were, the end result keeps wavering. When the record sticks to its hippy theme it has a sweet, scruffy sound, and Eckhoff’s buddies ensure there are plenty of tambourines and hazy guitars to cement his lyrics about sodium lights/strangers’ eyeballs/all the good bits of doing acid in the country. Occasionally they drop a strong pop hook, such as the mesmerising riff on ‘Ease Up’, like a happy ‘Street Spirit’, but then fatigue creeps in and they fidget around with indie rock, like Mark Oliver Everett when he’s really got the blues. It puts a downer on the psychedelic highs the band are capable of, which they pull of with such twanging authenticity that you’ll swear you’re in California watching pretty girls put flowers over people’s heads.