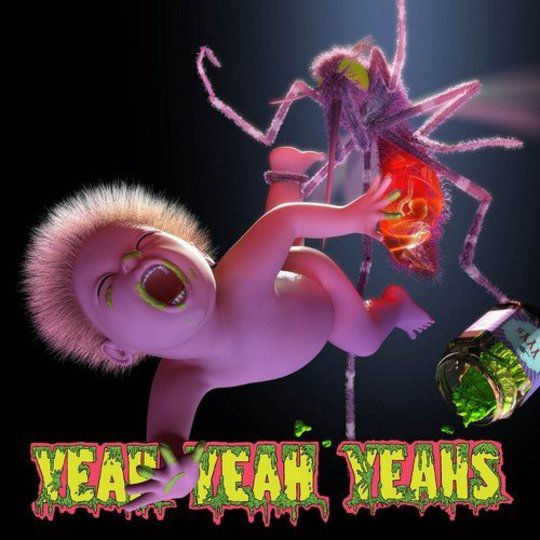 ‘Kick ass party pop with a neat sideline in ballads’ is how I might review the Yeah Yeah Yeahs’ fourth album, Mosquito. Or their third album It’s Blitz! Or their self-titled debut EP. Or – and you’re probably getting the picture here - any of their records.

This is not to accuse New York’s cutest long-serving indie trio of retreading the same old ground, as each record has been palpably different to its predecessor: Fever To Tell offered bone-rattling art punk; Show Your Bones dipped a toe in the waters of The OC-friendly indie; It’s Blitz! was sort of the electronic record (even if it forgot in the second half). But if the music has shifted a little each time, the intent has always been pretty much the same thing - kick ass party pop with a neat sideline in ballads.

I guess Mosquito’s ‘thing’ vis a vis the shift in the band’s sound is that it’s a pointedly eclectic record. Now, as a rule, eclecticism is something to be viewed with suspicion and fear – it tends to mean the band members have stopped talking to each other, or that they gave up on trying to make a proper record and just flung a bunch of incoherent studio bits and bobs together.

Happily, as a trio with only two instrument-playing members, the Yeah Yeah Yeahs basically HAVE to make music as a unit. And if it’s conceivable that the band set out to make a more coherent record than Mosquito, I’m not sure it’s a terrible shame that they didn’t: in sticking to a certain sound, both Show Your Bones and It’s Blitz! suffered from a little mid album sag; by contrast Mosquito zips around with abandon, never staying in one place long enough to get stale. The relentless flitting around means this probably isn’t going to be deemed an Important Record For The Ages, but – those ballads aside – YYY have always been kind of shallow: that’s part of their charm.

And of course the really great thing about Mosquito’s eclectic party pop is how joyously OTT everything is - the gospel choir on ‘Sacrilege’, the riotous dumbness of rock numbers ‘Mosquito’ and ‘Area 52’ (the latter of which has a silly sped up alien voice on backing vocals), the lush dub out of ‘Under the Earth’, the thrilling guest rap from Dr Octagon on ‘Buried Alive’, the chic electronic minimalism of ‘These Paths’ (much more electronic than anything on It’s Blitz!, in fact), the audacious – in some ways pretty daft - placing of the big ballad (‘Subway’) as the second track, between the propulsive ‘Sacrilege’ and bug-eyed ‘Mosquito’.

Though intentionally a little sloppy, the songwriting is, as a rule, vivid cartoon perfection - a little two dimensional, but always two BIG dimensions. Perhaps the band’s biggest success here, though, is that despite the presence of three producers, numerous guest stars and a musical palette almost piss-taking larger than that of Fever to Tell, it still fundamentally sounds like the Yeah Yeah Yeahs, raucous and lo-fi and a little rough around the edges, Karen’s voice wobbling through all manner of unlikely registers. There’s probably some nightmare dimension where the band got Justin Meldal-Johnsen in to produce everything to sterile ‘ perfection’, but enthusiastic imperfection was always a big part of the fun with this band, and they’ve been wise in sticking with longtime producers Dave Sitek and Nick Launey (with James Murphy in to produce ‘Buried Alive’).

The Yeah Yeah Yeah tend not to make anything as vulgar as ‘important’ records, and the band’s biggest legacy will surely be the number of other bands that formed in the wake of how entertaining they made it all look. So who knows if any of us will be listening to Mosquito in a year or two. But make no mistake, it is a blazingly enjoyable record, the most purely fun album the band has made since Fever to Tell. So not a lot left to add: kick ass party pop with a neat sideline in ballads - can't ask for more than that.