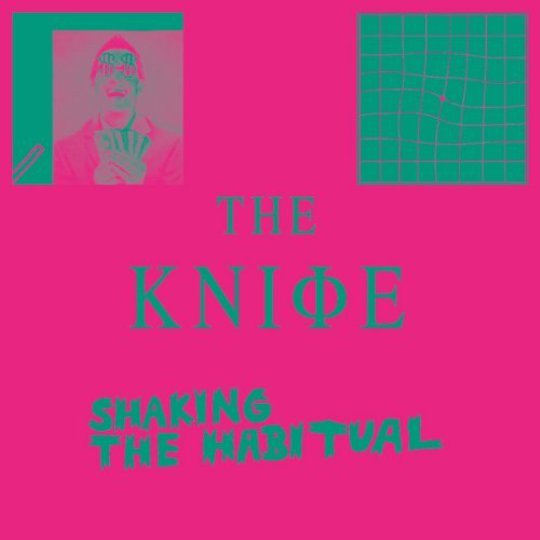 Beware. Behind the lurid pink cover lies an inscrutable energy-field, dense future-matter, the blue box from Mulholland Drive viewed through a reverse-telescope. The Knife’s fourth album, Shaking the Habitual, is unnavigable and unknowable, almost impossible to write about and even harder to listen to. Whilst ‘dark’ has always been the go-to adjective in describing the Swedish brother-sister duo, the lacquered gloss of Silent Shout appears positively luminous from this vista. These are the shockwaves following the blast. One hundred minutes of disparate fallout settling to form a splintered, alien landscape. Shaking the Habitual is an entity entirely unto itself; a warm chaos that drinks you in.

It's been three weeks now. My girlfriend has long since banished me from listening to this in her ear-shot. I fear my life expectancy has diminished over the course of seven or eight listens. Like the future-primitive Tom Hanks scouring the post-post-Apocalyptic Earth in Cloud Atlas, I feel severed of all reference points and perspective. In places, Shaking The Habitual sounds less like music and more like an impressionistic embodiment of deterioration and illness. For examples of this, look no further than the drugged and maimed loops of lead single ‘Full of Fire.’ It kinda ripples along semi-coherently before suffering a compound stress-fracture halfway though and descending into a hallucinogenic, detuned anguish. Don’t be fooled. ’Full of Fire’ isn’t a curveball to send the casual electro-fan skulking back to their Hurts records. Nope, at nine minutes this is The Knife exercising a degree of brevity, allowing you to settle into their shape-shifted new form.

Shaking The Habitual sees Olof and Karin working with unparalleled liberation. Recent interviews see the pair in confrontational and cryptic mode, espousing political and feminist ideologies whilst chastising the lack of authenticity within the modern musical landscape. Their press release is a sprawling, obtuse manifesto that takes aim at dozens of targets and reads like a runic translation. All of which threatens to shrink the role of the listener to sub-atomic levels. For all the didacticism, what exactly do you do with the vast 20-minute tundra of ‘Old Dreams Waiting To Be Realised’? Its function as a song seems secondary to its very being as a colossal sonic impasse. Perhaps this monolith represents The Knife’s ambition to shatter both societal and artistic parameters through the sheer physicality of their music alone. As ever with this album, it's very difficult to say.

Ultimately if their message is a political one then its hard to imagine to whom it may be addressed. You’d have to have spent the last few years living inside a kaleidoscope being drip-fed mescaline before you could semantically re-assemble songs like ‘Fracking Fluid Injection.’ If the title’s razor-sharp scansion didn’t give it away, this is another ten minute soundscape made by dangling a microphone from the arm of a discarded marionette whilst a chopped up loop of Kat Slater’s voice is infinitely re-routed through a home-made distortion pedal. In other words, Origin Unknown.

You see, I don’t know whether Shaking the Habitual demands to be taken seriously or demands to be made light of. It’s a big stretch to infer a heavily-politicised reading from a ten minute zither-improv; to do so might require a similar mindset to those who find codified dogma embedded within the lyrics to ‘I Am The Walrus.’ Musically too, The Knife are keen to conjour imagery of foreboding imperialism, and songs like ‘A Cherry On Top’ are reminiscent of the fortress-like monuments on These New Puritans’ Hidden. It's undoubtedly compelling, but whether it calls to mind anything more dramatic than a round of Capture The Flag on Unreal Tournament is a matter of debate.

In some ways Shaking the Habitual feels like a close artistic relation to David Lynch’s Inland Empire. Both see spectacularly lauded aesthetes throwing paint over a huge canvas, both feel like they need a York Notes companion guide to comprehend, both contain glimmering moments of undeniable magic. ‘Without You My Life Would Be Boring’ provides a bona-fide vocal melody, one to grasp with both hands and savour as voraciously as the kid from The Road draining a can of Coke. It plays out like a delirious ‘Bird Flu’ style urumee melam beamed from the year 2150. Elsewhere ‘A Tooth For An Eye’ is a rhythmically incendiary opener and ‘Raging Lung’ shares some of the same fractured, mournful DNA as the likes of ‘She’s Having Baby’ or Karin’s previous work under the Fever Ray moniker.

Assigning the album a number out of ten feels particularly farcical here. Undoubtedly some fans will be cornered into pretending they like this album a whole lot more than they actually do. For others, Shaking the Habitual might leave an entirely new musical landscape etched in its wake. Maybe it depends on precisely how finely-ground the Internet has rendered your attention span, but it’s impossible to speculate how time will regard this record. Get back to me in a decade's time and perhaps my own opinions will have started to fully-form. For now, The Knife remain steeped in shadow, as subliminal and unknowable as ever.