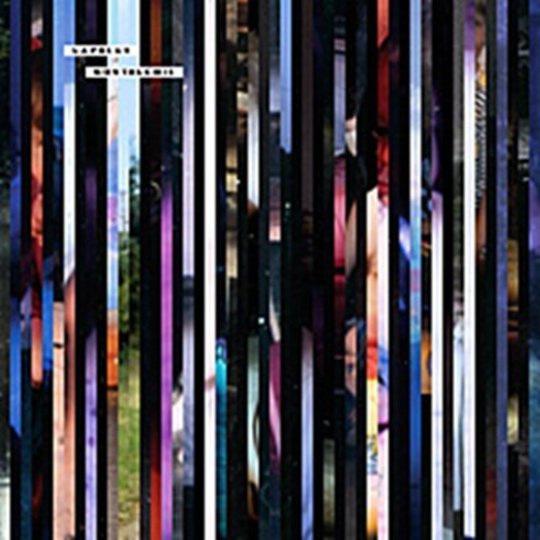 Kids can do clever things on laptops these days. Thousands of pounds worth of studio equipment can now be condensed into a few square inches of mac-space, and tinkered with to infinity by smart bedroom bound producers intent on perfection.

Although hardly a kid - he's 25 - Stuart Howard, the man behind Lapalux, sounds like he has spent a lot of time in his room. He makes layered, futuristic pop music that probably results from a lot of mouse clicks. Nostalchic is Lapalux's first LP on Flying Lotus's Brainfeeder imprint, so he is very much playing with the big boys now, and this album more than proves the Essex lad a worthy addition to their roster.

'A lot of the songs seem to have 60 or so tracks going on in them', Howard claimed in a recent interview. This is only a slight exaggeration, and it's this maximalist urge which aligns Lapalux with fellow UK producer Rustie. Yet where the Glaswegian's work conjures a state of hyper awakeness, Lapalux make music for softly lit rooms and fragile post club heads. On 'The Dead Sea', for example, voices whisper 'sleep, sleep, sleep' repeatedly over crackly vinyl hiss, as if in benign incantation. But even on noisier, looser jams like 'Kelly Brook'- where sampled rapping accompany a cacophony of drum samples and mangled diva croons - the overall feeling is of calm. Not a million miles away from falling asleep in a smoke filled room while someone absent mindedly surfs YouTube. A mesh of genres and voices, all held together by the narrative glue of sleep.

The textures (a word used a lot when discussing Lapalux) envelop a listener in warmth. Despite using many of the same surface techniques as producers such as Burial - pitch shifted vocal samples, clattering beats, and often avoiding 4/4 timing - Lapalux turns these tools toward create a woozy, contented world, completely at odds to the sweeping vistas of urban decay evoked by much dubstep production. Conversely, the world evoked in Nostalchic is a colourful one, alive with the sights and sounds of nature. This is seen in the serene swathes of synth which populate the record, their gentle undulations bringing to mind tidal ebb and flow. 'Guurl' is a fine example of this, as is 'One Thing,' whose introduction features the sound of running water and birdsong. These little touches breathe organic life into an album full of synthetic sounds.

Despite all the textures, Lapalux deals in hooks. Even if the songs sound like they're being played backwards, they still adhere themselves to the inside of your head. 'Flowers', for instance, has the jittering beats of a dubstep tune yet floats rather than fights, as Koreless style emotive vocal samples accompany a gorgeous melody that does its best to not sound like one. Few songs stray much over the four minute mark, and if you subtract their dreamy veneer of effects, what is left is pop music pure and simple. It's an enjoyable and consistently melodic listen that reminds me of some of the less outre acts on Tri-Angle such as Balam Acab.

Nostalchic is much more song-orientated than anything Lapalux has done previously. And the large proportion of slower cuts with guest vocalists showcase both Howard's love of R&B and also a newfound songwriting maturity. The album is about songs not textures, and despite being consistently pleasing on the ear, its depth deserves more than to be treated as mere background hum.

'Deep' is an overused term when discussing electronic music these days, but Nostalchic does contain some moments of genuinely beautiful melancholy. Even, dare I say it, deepness. None more so than album highlight 'Without You'. This warped, slow motion ballad sounds like it's being sung from the bottom of the ocean, as cavernous echo engulfs a doomed lover's joint plea of ?I didn't want you to leave me.? It's moments such as this - where Howard displays a sophisticated grasp of emotions alongside his more obvious, and already well established, talents as an engenious sonic arranger- when the album is most impressive.

Rather than creating the chic nostalgic music the title might suggest, Lapalux's this LP is distinctly forward looking. It builds on the promise of last year's more experimental EPs by fusing myriad influences into coherent songs.Where previously it felt like Howard was running at full pelt, trying to fit as many different ideas into a song as possible, he now shows more restraint, letting the songs speak for themselves.

Nostalchic is an album full of lush sonic textures, but also one bursting with hooks and, most importantly, feeling, too.