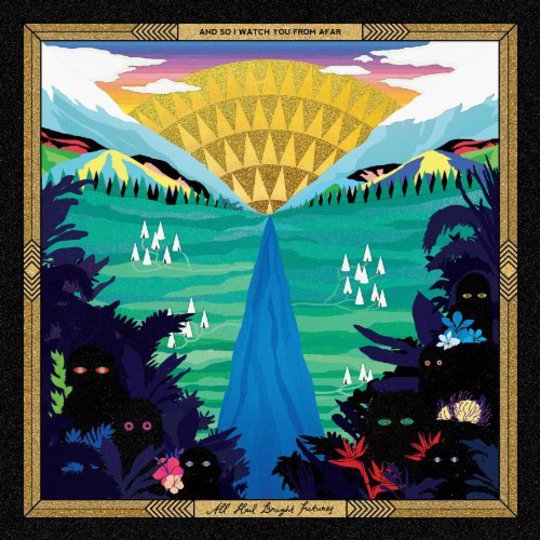 Set quirkiness to kill. Clutter with unnecessary gang vocals, hand claps, steel drums, bird song and spoken, single syllable repetitions. Disregard the tight, bombastic song-writing of prior releases in favour of an ineffectual attempt at soundscaping. Scupper all emotional resonance with excessive zaniness and self-indulgent experimentation. Widen your pool of influence to the point of diluting what made you special in the first place. Replace a myriad of emotions in lieu of 50 shades of 'fun' each more saturated than a children’s bumper box of neon felt-tip pens. Substitute post-rock majesty, metallic aggression and dive-bombing dynamism with torturous levels of tweeness usually reserved for the likes of Vampire Weekend. In short, make a terrible album.

I doubt any of the above were high on And So I Watch You From Afar's agenda as they set out to write and record their third full-length, but by ill fortune or ill judgement that's exactly what they've achieved with All Hail Bright Futures, an interminable album of E-number induced hyperactivity and ill-advised forays into indie pop and chirpy calypso. It's hard to reconcile the clutter of sub three-minute tracks and half-baked explorations present here with the band previously responsible for songs such as 'Eat The City, Eat It Whole'; an emotive masterpiece that suggested ASIWYFA were perhaps descended from the same sainted lineage as progressive post-metal masters Oceansize.

The blistering instrumental post-hardcore found on Gangs in tracks such as 'Search:Party:Animal' and 'Think:Breathe:Destroy' is also long gone, replaced instead by percussive tropical pop. This in itself isn't a criticism, but while nuance and subtlety aren't necessarily prerequisites for creating monstrous instrumental rock (something ASIWYFA excel at), a lightness of touch is certainly beneficial when dealing with the quainter strains of guitar music.

But All Hail Bright Futures blinds when it should illuminate and bludgeons where it should caress. With the exception of 'The Stay Golden Pt. 3 (Trails...)' where rising strings and horns coalesce to create an uplifting, almost regal atmosphere, the new elements ASIWYFA attempt to integrate here veer between unnecessary or downright obnoxious. 'Ka Ba Ta Bo Da Ka' is positively insufferable as each syllable is repeated atop layers of steel drums, hand claps and weird electronica and 'AMBULANCE' is a giddy squall of chanted letters and jaunty percussion. Even on tracks such as 'Big Things Do Remarkable' where Rory Friers' frenetic fretwork remains the focal point, the spark just isn't there.

Stating 'they simply aren't as good', isn't good enough. But it's a blunt, if perfunctory way of saying the magic and beauty of their previous albums is glaringly absent. The lack of direction, endless sonic distractions and hugely increased level of oddball eccentricity all conspire to bring All Hail Bright Futures to its knees. Even at their most derivative, when accusations of merely aping Explosions In The Sky or God Is An Astronaut held some weight, ASIWYFA were far better than this. All Hail Bright Futures withers under the glare of its own garish spotlight, and no amount of zest, pep or joviality can save it.