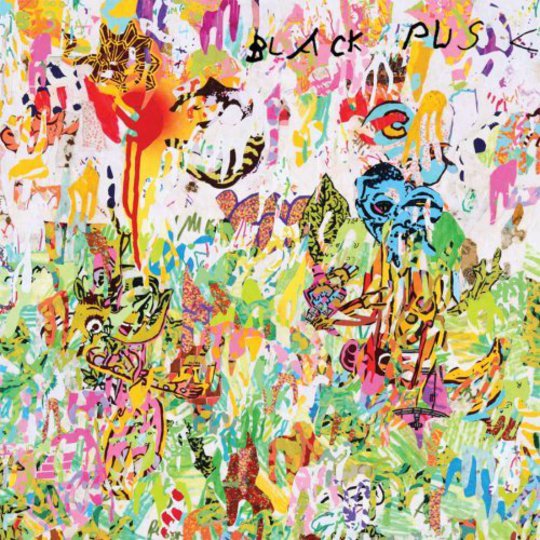 All My Relations is Black Pus’s debut for the Thrill Jockey label, and as such, will have by far the most ample distribution of any of his releases to date. Should your town have a decently stocked indie record emporium, you ought to be able to stroll in and pick this up. By contrast, when Brian Chippendale started releasing under this grody name back in 2005, the only place in – as far as I could ever ascertain – the world you could buy Black Pus CD-Rs was a punk rock kinda shop in Providence, RI, where Chippendale lives.

The mid-Noughties also saw a peak level of interest in Chippendale’s musical activities, thanks to him being the drummer in rhythm-section-only duo Lightning Bolt. If you were in something of an acceptable face of noise music/ATP season ticket holder’s bubble at this time (and I’m going to at least entertain the possibility that you were), it really seemed like Lightning Bolt were a pretty big band. All relative, obviously, but their obstinacy and DIY value system didn’t stop them being able to draw four-figure crowds if the setting was right, and probably boosted their appeal in a way. In spite of going on to appear on albums by Björk (Chippendale) and The Flaming Lips (both members), they made no attempt to turn their popularity into anything obviously commercial. Which brings us up to All My Relations, released at a point where Black Pus appears to be a greater force in Chippendale’s life than Lightning Bolt – but both seem to have turned back into the hassle-free and fun projects they were surely always intended to be.

Chippendale describes this album as 'a hi-fi affair' on his blog, which again is only true if speaking relatively. It was recorded in a no-foolin’ studio, when a four-track has often sufficed for Black Pus’s more toxic squirts, but there’s only so much it can sand down the edges of this dodecahedron. Chippendale still likes to push everything into the red, obscure his vocals via monstrous FX, and embark on highly exploratory percussive journeys. This is a timely reminder that the dude is an incredible drummer: equal parts free jazz and hardcore, loose, intuitive and hard-hitting in all the best ways. From ‘Marauder’, the album opener, he’s cooking up a storm, all the while using (we’re told) an oscillator hooked up to a bass drum trigger which detonates unruly low-end implosions. Or 'sick drops m8,' as a younger generation might have it.

There are points, as with previous Black Pus releases, where it’s easy to picture this as a Lightning Bolt release that never was. ‘1000 Years’ bounds along atop a four-four beat, abetted by the kind of reappropriated playground chant that LB were rinsing on (especially) second album Ride The Skies; in place of bassist Brian Gibson are a volley of window-rattling oscillations. (Pretty much everything Chippendale has put his name to has been loud as all hell, but maybe about the midrange more than anything. All My Relations has no problem getting low with those lows.) ‘Word On The Street’ flings you into the tornado’s centre and pelts you with psychedelic dub distress flares, in the form of Chippendale’s ultra-reverbed vocals.

An extensive Black Pus tour of the US is imminent – Chippendale is keen on visiting Europe, but that’s all at present – and the prospect of this stuff being roadtested is genuinely intriguing, much more than was the case with his solo work in the past. A large part of Lightning Bolt’s appeal as a live band was the prospect of seeing, from as close as a few feet away, how on earth they churn this toxic trash out on the fly. With Black Pus, the drummer is controlling everything, which seems like it’ll be even more impressive. Make no mistake, either: if you managed to bug out sweatily to Lightning Bolt back in the day, you can do it to this too.

The album’s final three numbers, totalling over 22 minutes, are exemplary noise-rave fodder. ‘Hear No Evil’ mashes up bizarro folky chants, akin to an android Thin Lizzy, with an industrial techno bass throb. ‘Nowhere To Run’ has a heavily obtuse side – scrawly, splattery tones making me think of glass-chewing Aussie sound artist Justice Yeldham – but stays on the level through a lithe, cymbal-heavy drum performance and more of those mutant dub vox. And ten-minute sendoff ‘A Better Man’, while again smoggily exhaling in the repetitive manner of the darkest techno bassline, sees Chippendale venture all over the shop while behind the kit, notably in the bonkers 90-second finale.

All My Relations isn’t a replacement for a brand new Lightning Bolt album, the last one of which dropped in 2009, but it scratches many of those itches, while also fully justifying existence on its own terms. Brian Chippendale has no interest in making his puzzles easy, but Christ, it’s just wonderful to hear him playing drums.