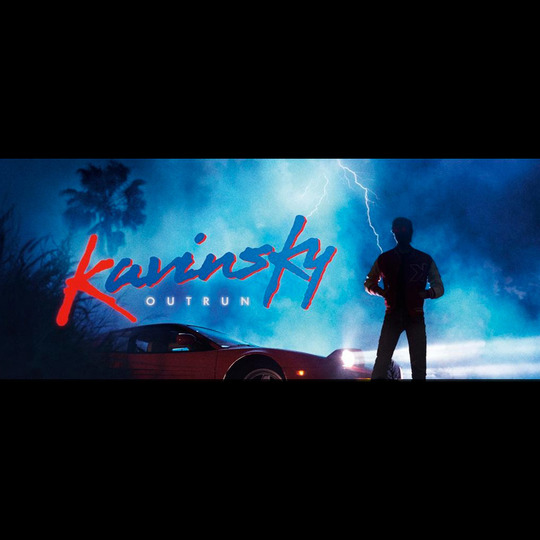 MySpace friends are a bit like your old school friends. Because of those status updates, the blog posts, and them photo galleries were self-shot, there was a new form intimacy, which allowed humans to gawp across the digital divide. Distance became confused, and space and time went a bit Back to the Future... Everyone was equal: famous, genuine friend or just notorious on your favourite online forum, it didn’t matter, we could see right inside someone’s head and glimpse the detritus of their lives in the background of their shots. 'Thanks for the add' was our polite nod to a stranger and ♥ was our secret handshake. Mostly, the reason these friendships were tiiiight was because ‘we’ shared a time. MySpace was our ‘Nam ...you won’t understan’ if you weren’t there, man!

Kavinsky was the coolest kid on the block. For starters, he was French, and had music and design that was fresh and super-fantastic. His brake light red and twilight blue cartoon avatar drew you into a computer game world. The synths kicked race car clouds of pixels in your mind’s eye... Years later, we’ve all grown a little older and possibly a touch wiser, but little has changed. Change is good/bad [delete as applicable].

“They’re talking about you, boy, but you’re still the same...”

The passing of time and the Drive soundtrack success of that song (‘Nightcall’) has done little to phase Kavinsky’s phazers. The rhythms remain ominous and the bass still bathes in the shadow of the synths' neon glow. The tunes never pounce or bounce or over complicate themselves, even when (somewhat questionable) rappers or super-dreamy female vocals enter into this Tron-like world (yes, it sounds like a mellow, soundtrack-y Daft Punk, but let’s not get reductive or verge on racism, pigeon-holing any and all French electro artists as being one and the same...). And, yet, for all this consistency of sound and vision, and this perfectly defined sense of self, something about Outrun seems a little self-indulged.

Sentimental for his own past, Kavinsky seems unable to evolve. There's a self-aware air of repeatedly asking 'remember me, I was cool back then? I still am, right?' Perhaps it’s the fact that this is - after all those years, that have seen MySpace rise and fall - his debut album, but almost every track on here seems to have settled into a template. Outrun would have sounded groundbreaking and been lauded as 'revolutionary' in the months before Justice blew up, but all these years (and Chromatics, M83, Metronomy, et al records) later, Kavinsky (aka K?VIN?KY) sounds like one of those old friends, trapped in a teenage dream, replaying the ‘glory days’, unable to move on... A lot of the magic of Kavinsky was the box freshness of his reimagining of the past, but across these 13 tracks the allure of Beverly’s Hills Cop high-tops and alien blasting game soundtracks begins to sound tired and worn out. Apart from 'Nightcall', the magic wears off after a couple of listens, like a joke that gets old, and your humble critic is left frustratedly shouting UP YOUR GAME TEEN WOLF BOY!

There's a lot to love about this Flight of the Navigator meets Knight Rider soundtrack, and this resistance to change should be lauded, and the confidence that it ain’t broke admired, but there's something about you boy, and I was expecting more than, more of the same...