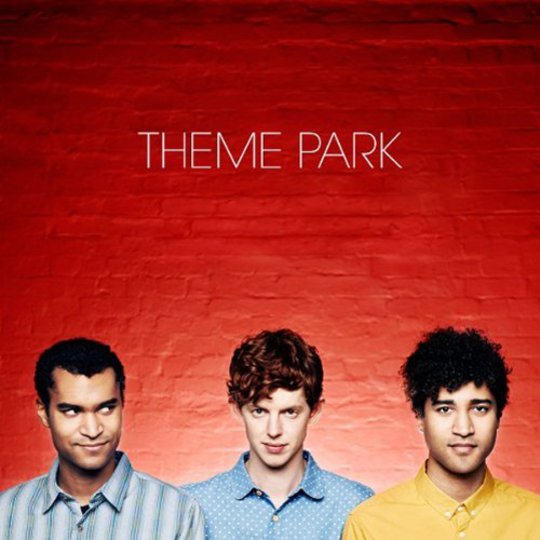 On first impression, Theme Park seem like a pretty carefree bunch of guys. The London trio’s self-titled debut LP bounces around to the sound of elastic bass lines and tapped out guitars that flutter and flicker with kid-like excitement. Add a dollop of sugarcane production into the mix and what comes out is an innately summery affair, best suited to moments of sun-wallowing pleasure.

But there’s more to this ebullient offering than originally meets the eye. Theme Park, you see, have been doing the musical rounds for a couple of years, gestating a sound that’s seen them touted as the new Talking Head/Foals/Vampire Weekend, or any moderately successful band with a penchant for complex rhythm patterns and up-tempo melodies. It’s slightly surprising, then, to find they’ve created a record bearing very little resemblance to any of these touchpoints.

Drenched in irresistible hooks and big heady choruses, each of these 12 cuts revolve around good times, or at least the upcoming prospect of said good times. Musically, Theme Park jangle their guitars, swoon their harmonies, and shake their funky derrières in the general direction of the dancefloor. Essentially, what we’re dealing with is a shameless indie pop record created by a shameless indie pop band.

Yet beyond the honeyed goodness is an album of substance. Take opener ‘Big Flood’. Underneath its glossy veneer of elated keys and smooth, rubbery bass lurks a hardkicking percussive engine striving to maintain the song’s melodic urgency. ‘A Place They’ll Never Know’ and ‘Wax’ are equally multi-faceted, using effervescent guitar hooks to reel listening ears into a web of zig-zagging synthesizers and calypso rhythms.

For the most part it’s a successful approach, etching out real depth from twisting jaunts like the excellent ‘Ghosts’ and ‘Jamaica’. But as soon as they tread away from the angular indie pop paradigm, Theme Park begin to lose their edge. The echoing Eighties overtones of ‘Two Hours’ float depressingly close to The Killers at their most benign, while album epilogue ‘Blind’s all-for-one sentiment feels as sanctimonious as a boozed up Bono set loose at a charity fundraiser.

This stylistic drop-off implies Theme Park are still to settle on a chosen career path. On one hand, there’s enough creative flair here to suggest something special isn’t far away. Yet, they could just as well be readying for the mainstream, eager to embrace the fleeting adulation brought on by sentimental indie melodies. A debut LP this may be, but it already feels like the sound of a band at a crossroads. This carefree bunch may need to get serious soon.