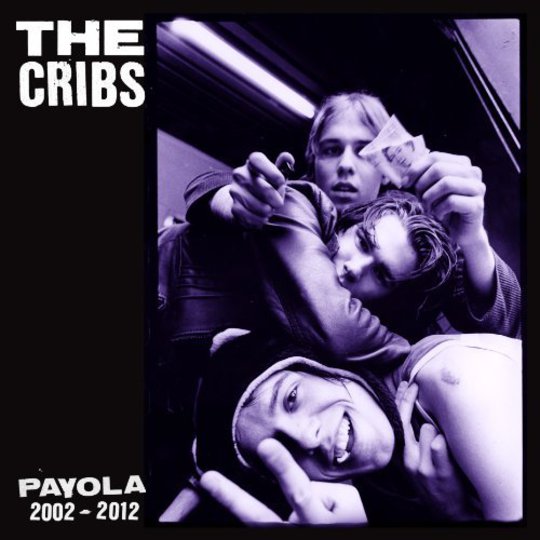 Guitar bands, we’re told, are BACK BACK BACK. There’s a whole new troop of skinny, grubby faced, posh boys from London suburbs raised on Noel n’ Liam n’ Pete n’ Carl n’ the myths of Britannia and old Albion, doing scratchy indie rock and traversing the country in battered vans. It’s an odious viewpoint that doesn’t ring true in the slightest - the kind of skinny-jean rock that sounds best upstairs in the Star and Garter with a pint of cider and your trainers sticking to the floor doesn’t need a come-back, because it’s never gone away, and here’s The Cribs' best of record to prove the point.

Coming in on the same wave of urchin rock as the Libs and co, The Cribs (as opposed to, say, The Others) have refused to go away, propping up the XFM playlist for the best part of a decade with a remarkably consistent string of great pop singles and strong albums. In many ways they’re a textbook case of how to do British indie rock: work hard, tour hard, get your idols and influences to produce (Bobby Conn, Edwyn Collins, Alex Kapronos, Steve Albini), progress your sound but not too far, get a celeb girlfriend but not a flashy one, don’t sell out, don’t start being shit, when all else fails employ one of the Smiths. They should be taught in schools, if widespread 'learn how to be an indie rock n’ roll band' courses wouldn’t completely destroy the scene forever (it’s happened to stand up comedy, it can happen to lo-fi pop).

Payola, the group's first proper retrospective, pulls together most of their singles and a good chunk of their better album tracks to create a fair representation of everything that works about The Cribs. 'Well sequenced' may seem like faint praise, but when you’re putting together a collection of existing material it’s one of the most effective skills you can have. The scrappy strictly bass-one guitar-drums lo-fi of ‘Another Number’, from their self-titled debut, is an effective opener, reminding us how charming and witty their early records were and resetting the last ten years of increasingly bigger and richer music, allowing us to rediscover that evolution over again.

From there it’s a fairly straightforward journey through the last decade, covering the proper sticky-floored-indie-club-XFM-friendly ‘Hey Scenesters!’ and ‘Men’s Needs’, through to the full-throated grunge of last year's ‘Come On Be a No-One’. Standing out a mile is the material written with Johnny Marr on guitar, ‘We Share The Same Skies’ is an utter gem, Marr’s gracefully spiralling riff beamed in from some point in 1986 and effectively spraying 'Johny woas 'ere' in massive letters across the whole thing. ‘Cheat On Me’ pulls the same trick, grafting shimmering Eighties indie to a grungey Nineties lo-fi that reeks of Pavement and Monster-era REM. Kurt Cobain would have sold his wife to get that balance, assuming he could find a buyer. The merging of American and British influences is one of the things the Cribs have always done well.

It’s difficult to effectively rate greatest hits records, you have to take it as a given that the songs are all top drawer, which leaves three variables: selections, sequencing and compulsory new material. Payola aces the first two taking all the obvious tracks and adding in some of the darker corners of their discography (‘City of Bugs’, the incredible ‘Be Safe’) and creating a lovingly evolving shape for the record. There’s only one new song included, alas, the closing ‘Leather Jacket Love Song’ which doesn’t shine especially above any of the others, but then best of’s bonus tracks rarely do. It’s a little Cribs-by-numbers, pointing to the past rather than the future.

Cribs fans, of course, will have all of this already. There’s nothing here you can’t achieve with an iTunes playlist. However, grouping these songs together is a happy reminder of how consistently great The Cribs have been, and if you’re a newcomer this is the best possible introduction to a band that have been keeping indie-rock very much alive and kicking for a decade and counting.