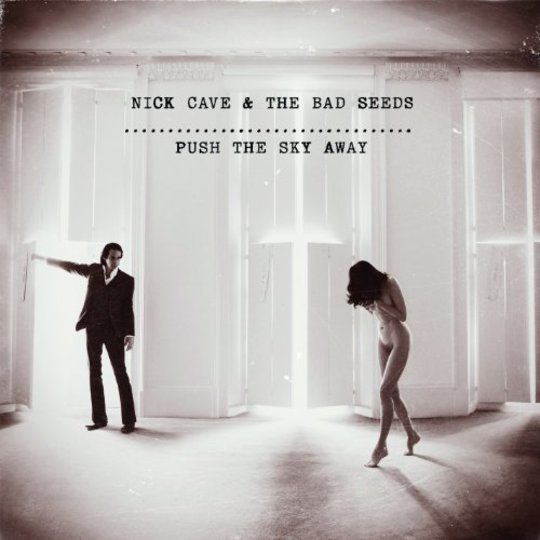 Nick Cave & The Bad Seeds have been doing dignified for almost as long as they’ve been doing undignified, and with the official (if apparently not actual) disbandment of their midlife crisis rock alter egos Grinderman, it was probably about time that the gang went stately again.

Nonetheless, if Push the Sky Away boasts many of the trappings of the pointedly sombre late record by the borderline elderly rock star – strings, gospel, slow tempos, black and white cover – then equally it does a fine job in subverting most of them.

Cave, now 55, has already done his stark, earnest album about love and mortality: The Boatman’s Call, released back when he was a stripling of 40. He also indicated that he felt uncomfortable at its emotional openness, and if Push the Sky Away shares a certain sense of gravitas with Boatman’s Call - and is almost certain the least preposterous album Cave has put out in a decade – then it also filters it all through a prism of post-Grinderman irony.

This is nicely demonstrated by lead track ‘We No Who U R’, an austere, half-vulnerable, half-threatening pastoral whose vaporously lovely form nonetheless takes on the slight air of a smirk, if only by dint of that text-speak title (which in turn underscores a relatively insubstantial lyric).

And there’s that genius cover art, in which the glowering Cave appears to be ordering a weeping, nubile angel out of heaven. It’s gloriously layered: on the one hand it’s an amusingly camp subversion of the bombastic Old Testament imagery Cave used to flirt with; on the other the model is Cave’s other half, Susie Bick, and what we are basically looking at is a middle aged man showing us how hot his wife is.

Cave has written some of the most unabashedly obvious songs of our times – ‘No Pussy Blues’, ‘The Curse of Millhaven’, ‘Into Your Arms’, ‘Scum’, ‘The Weeping Song’, etcetera etcetera – but here everything is defined by restraint. Mortality is not dwelt upon at length, but surreal allusions to fatherhood and ironic youth references pepper the record - sometimes brilliantly: on 'We Real Cool', Cave croons the slightly incongruous title phrase with wince-inducing desperation.

Elsewhere, familiar Bad Seeds tropes are muffled and screwed around with: ‘Jubilee Street’ and ‘Wide Lovley Eyes’ damper the grand melodies of yore into something intimate but conventional; ‘Water’s Edge’ and ‘Mermaids’ tone down the classic blackhearted Cave rant into chic, streamlined beat poetry.

What the album is missing is viscerality, be it of the thunder and blood variety or simply out and out heartstring tugging. There's something slightly vague at the heart of a lot of it - examine the lyrics closely and there's less to chew on than other Cave outings; don't pay enough attention and the songs slip down too easily, without friction or nastiness.

This is not a major criticism – atmosphere has always been a major part of what the Bad Seeds do, and this is an intensely atmospheric record. But the slight hollowness feels highlighted by the exemplary final two tracks, 'Higgs-boson Blues' and 'Push the Sky Away'.

The former is seven and a half minutes of very slow, very existential gospel and blues, on which Cave waves ta ta to the lyrical restraint of the rest of the album and allows himself a sometimes deliciously ripe (“If I die tonight, bury me in my favourite yellow patent leather shoes, with a mummified cat and a cone-like hat”) ponder about his exact place in a universe in which man has found ‘God’ in a large tube in Switzerland. It’d be brilliant for the name alone, but it really is outstanding, as if the Large Hadron Collider ripped a hole in the space-time continuum and allowed the Bad Seeds to join in with the sessions for On the Beach.

And the closing title track almost goes in the opposite direction, a moment of grand pomp and solemnity on a record that’s largely wary of the big gesture: “And some people say it’s just rock’n’roll, oh, but it gets you right down to your soul”, Cave declaims, magnificently, over hymnal synths.

Cave’s schtick these days is less demonic preacher, more old guy railing self-mockingly against the dying of the light; but he feels a way away from perfecting that shtick without Grinderman to hide behind. Push the Sky Away, then, is not the Bad Seeds at their zenith, but pretty bloody spectacular for a fifteenth (or seventeenth, or twentieth) album.