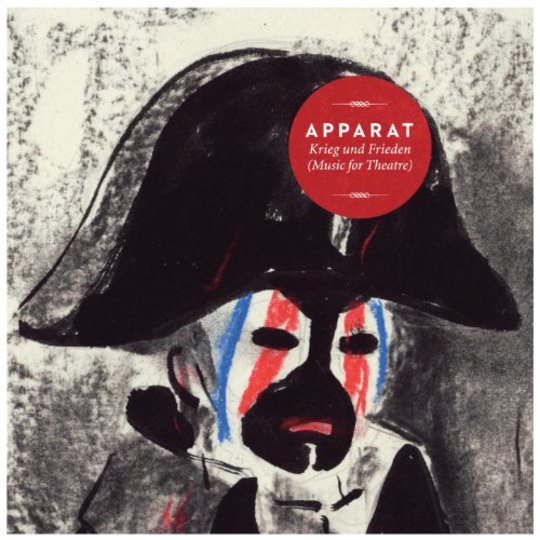 Sascha Ring’s foray into the land of theatre scoring should be deemed as not only a complete success but a nigh on perfect collection of compositions.

Originally commissioned to bolster the already emotionally charged prospect of German director Sebastian Hartmann’s stage adaptation of Leo Tolstoy's War and Peace, Ring - aka Apparat - composed the score without any reference to Hartmann’s production at all, instead locking a string section into a factory to sculpt the motifs. Understandably, when the dust had settled on the production, Apparat’s yearning still embered, and a desire to bloom these motifs into full-compositions took over. Krieg und Frieden is the result.

This is a collection of stirring, cinematic and tender compositions that gracefully move between minimalist composition, chamber music and white noise. The components are blended peerlessly.

In wanting to extend the life and impact of his theatre motifs, Apparat creates pieces that move with the mellow majesty of Max Richter’s work. On the opening ‘44’ a violin motif is set free to tumble and bounce over shifting chord patterns. It’s a simple, sad mantra that constantly turns before leaping into a higher cadence and dissolving into six minutes of gentle noise in ‘44 Noise Version’.

In track three, ‘Light On’ (plus its effective reprise, closing track ‘A Violent Sky’), Ring makes his one misstep. His own vocals enter and competent as his voice is - and as soft as the music is that bubbles and cracks behind him - it shifts the atmosphere of the album. This doesn't feel like it evolved from a motif for ‘War and Peace’ but a motif that would have stemmed from a Moby sample. Two thirds through it starts to evaporate once more into the pure emotional stimulation of gently resonating noise.

The whole album is magical, but ‘Blank Page’ is worth particular mention for moments when the music feels as though it is rewinding its way into existence. Drone notes suddenly reel through hi-pitch tones accompanied by voices that oscillate delicately into choral warmth. It not only evokes the majesty of a Lynch/Badalamenti ‘goodbye life’ accompanied-by-glorious-strobe-lights-moment, it competes and projects just as vividly, without a single visual frame for reference.

With ‘Austerlitz’ Apparat plays his big theatre crescendo moment and he does it perfectly. He doesn’t overplay the pomp; the bulk of the track is a gentle steady drumbeat supporting a glorious violin line. Instead he lets a powerfully tempered fanfare emerge from its mechanical growls.

Apparat has always approached music from interesting angles, combining styles and modes into electronic music with deft and rewarding vigour. But his work until now can only be seen as preparing the ground for this body of work, an album so satisfying, accomplished and beautiful.