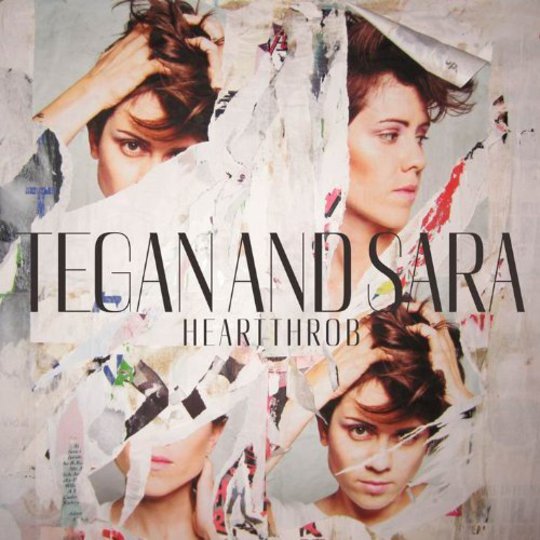 "We've made everything different," Tegan or Sara from Tegan & Sara told music mag Spin last year, "If we could change our band name we would. It was time to shake things up.".

She was talking about Heartthrob the Quin twins’ seventh and shiniest album and an unashamed grab for the grown-up pop big league. Helmed by a producer who scrubbed up Ke$ha’s grubby bits and sanded down Lily Allen's rougher corners, Heartthrob plays Katy Perry, Gaga and Gwen Steffani at their own game, harnessing the power of Bananarama, Cyndi Lauper, Madonna and Robyn and trouncing all over the contemporary competition. Make no bones - this a thumping good pop record, possibly the best you’ll hear this side of summer.

Tegan or Sara was actually telling a bit of fib - anyone paying proper attention has seen the duo edging toward this like a kitten in a snowdrift, though it’s taken them a decade to let themselves tumble into it properly.

Rather than a revolutionary new direction, Heartthrob is a natural next step from 2009’s Sainthood, albeit a polished and adrenalised one, and the end of a process that really began with So Jealous in 2004.

It does, however finally break the ties to the cutesy lo-fi indie of their earliest records - this is audibly the same band that made Sainthood or even The Con but it’s a completely different Tegan & Sara to that of This Business of Art. And yes, there’s a subset of fans who are going to mourn that transition because there was something lovely and quite unique about those early records and while you can’t expect any artist to stand still for the best part of 13 years, you can be a little wrong-footed when cute indie bands put out an album of Eighties and Nineties-inspired dancefloor belters. It’s like the Moldy Peaches coming back sounding like No Doubt. But anyone listening with indier-than-thou sour grapes is missing out - by completing their transition, the Quins have actually made their most satisfying, self contained and sharpest record in years, and arguably their best yet.

Here’s why Heartthrob verges on a perfect pop record. Firstly it’s only 37 minutes long and there’s not a wasted moment. There is not an ounce of fat on here. All great pop albums should fit on one side of a C90. Tick. Secondly it’s well aware of its influences and steals from the best: Eighties synths, Nineties attitude and a propelling twenty-first century drum sound combine like 1987 Prince making a Carly Rae Jepson album with lyrics by Paul Heaton and attitude by Buffy the Vampire Slayer. And under all of that, because this is Tegan & Sara after all, there’s a soul.

At its, well, heart, Heartthrob is a record about heartbreak. The title isn’t referring to Justin Bieber, it’s the unbearable sob of a broken heart. This is a deeply sad record, and its finest moments are all basically synth-driven power ballads. Katy Perry would genuinely sell her wig collection for something as powerful and well-rendered as ‘Now I’m All Messed Up’, ”Go if you want, I can’t stop you” sings Tegan or Sara, while her sister betrays the real desperation with a counterpoint of ”Please stay”. Like the music there’s no fat here, no pretension. The duo are adept at rendering the simplest of universal truths. “I was a fool for love”...”you never really knew me, never saw me”...”I won’t be the one who waits for you”, again and again - the heartbreak comes in waves, but it’s never cloying, never over the top. Instead it gives real punch to the songs - they mean this.

The best moments here - ‘I Was A Fool’, ‘Love They Say’ and ‘Now I’m All Messed Up’ - are fuelled by the bitterness of the broken heart, but there’s a note of empowerment in their voices and in the irresistible throb of the synth lines. This isn’t wallowing in misery, it’s dealing with it, channeling it into something positive. It’s what all the best pop should do. Tegan & Sara don’t need to channel the half-remembered emotions of Cathy Dennis or Linda Perry to make exquisite pop music- they’re articulate and savvy enough to write a record Cheryl Cole would need a small army to achieve with just a few hired hands.

They may have churned their sound into something new, but their heart and their character is still very much in the right place, and that’s what makes Heartthrob more than just a brilliant pop album, it’s unarguably a brilliant Tegan & Sara album and it’s very, very close to being perfect.